by Anayo Onukwugha
in Cover Stories
0 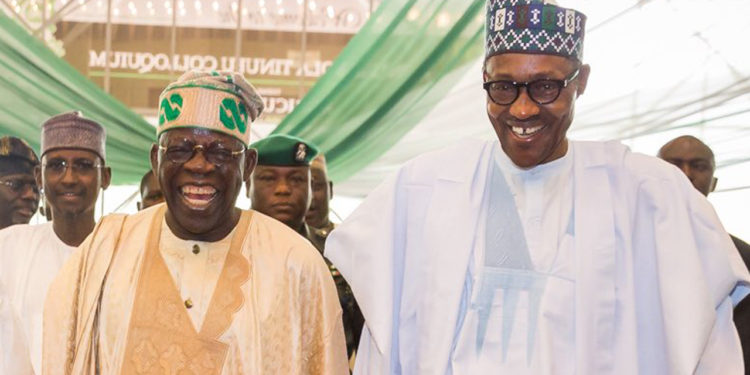 Southern and Middle Belt Leaders’ Forum (SMBLF) has lauded President Muhammadu Buhari, for not interfering in the process of electing the presidential candidate of the All Progressives Congress (APC).

The statement reads in part: “The Southern and Middle Belt Leaders’ Forum (SMBLF) has lauded President Muhammadu Buhari for staying true to his promise of non-interference in the process of electing the presidential candidate of the All Progressive Congress (APC).

“Given the president’s earlier reported request to the APC Governors to allow him pick his successor, SMBLF considers the process leading to the emergence of the APC’s presidential flag bearer as, reasonably transparent, fair and credible.

“Accordingly, the Forum congratulates former Governor of Lagos State, Asiwaju Bola Ahmed Tinubu, on clinching the APC presidential ticket, following the heart-warming contest. While noting that, his emergence as the presidential flag bearer of the All

Progressive Congress satisfies the Forum’s imploration to major political parties in the country, to present southern presidential candidates for the 2023 elections.

“In observance of the principle of rotation and zoning of key political offices, especially the presidency, between the North and the South, which has been a sine qua non, in the nation’s political progression.

“That though SMBLF had preferred the presidential ticket to go to the South-East zone, based on justice, fairness and political inclusiveness, the Forum wishes Bola Tinubu well and urges him to be magnanimous in victory.

“SMBLF was particularly impressed by the nationalistic essence demonstrated by the APC Governors and political leaders of the Northern States, who maintained and followed through on their earlier resolution that the party’s candidate in the 2023 presidential election should come from the southern part of the country; despite the melodrama orchestrated by the National Chairman of the party, Senator Abdullahi Adamu, on the eve of the party’s Special Convention.

“SMBLF anticipates that the Northern Governors and political leaders would prove the same attitude of patriotic resolve during the main presidential election in February 2023.”

SMBLF commended the chairman of the Southern Governors’ Forum and governor of Ondo State, Rotimi Akeredolu, for his principled insistence on the rotation of the 2023 presidency to the South, unlike some of his colleagues who vacillated, adding that it remains the position of the Southern and Middle Belt Leaders’ Forum that another northern president in 2023, after the statutory eight years of President Muhammadu Buhari, would not only be unfair and unacceptable but deleterious to the peace and unity of Nigeria.

SMBLF reiterated its call on the people of Southern Nigeria, the Middle Belt region and all well-meaning Nigerians to, as a hallowed responsibility to the nation, vote for only southern presidential candidates in the 2023 election, in the national interest.