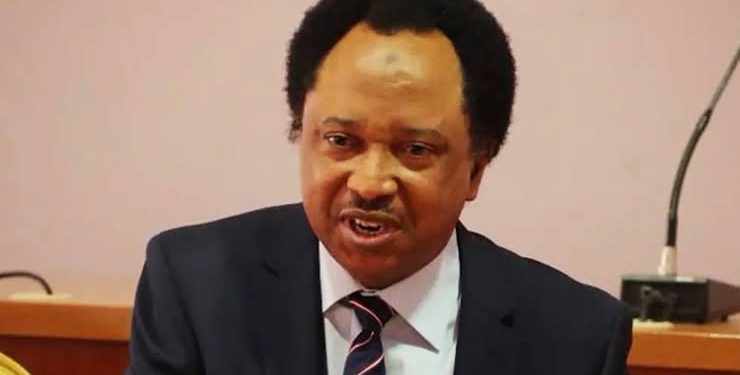 Hours after a chieftain of the Peoples Democratic Party (PDP), Ayodele Fayose, on Wednesday, tweeted that a President from Southern Nigeria must be produced in 2023 general elections, a former lawmaker from Kaduna State, Shehu Sani, has cautioned the former Ekiti State governor to take things easy.

Fayose had said his agitation for Southern Presidency was supported by a relevant section of the PDP constitution, adding that Nigerians should await the details of his action soon.

But Shehu Sani, who represented Kaduna Central in the Senate between 2015 and 2019, said someone like Fayose, whom he described as a ‘big brother’ needed to understand that delegates, who choose presidential candidates, don’t read constitution as they only understand crispy currency notes. 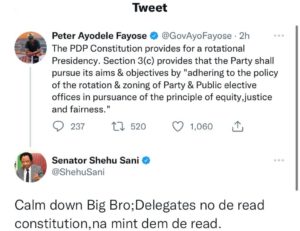 LEADERSHIP earlier reported that Fayose said that after the eight-year tenure of incumbent President Muhammadu Buhari in 2023, the next President must come from the South.

He said it must be a President from the South in 2023 or nothing, borrowing the now famous political slogan of the All Progressives Congress (APC) presidential candidate, Asiwaju Bola Ahmed Tinubu, “South Lo kan”, meaning it’s the turn of Southern Nigeria.

Fayose contested and lost the PDP presidential primary election in May. Not a few political watchers have expressed surprise about his sudden campaign for zoning of power to the South.

LEADERSHIP gathered that the former governor has an axe to grind with the PDP leadership and the party’s presidential candidate, Atiku Abubakar, over the just-concluded Ekiti State governorship election, in which his preferred candidate, Bisi Kolawole, lost.

Also, Fayose’s grouse might not be unconnected to the choice of Delta State governor, Ifeanyi Okowa, as Atiku’s running mate for the 2023 elections, at the expense his political ally and friend, Governor Nyesom Wike of Rivers State.

He wrote: “The current President of Nigeria is a 2-term Northern Presidency, thus implying that it MUST be a Southern Presidency in 2023 or NOTHING. Awa “South’ lo kan’. Nigerians should await details soon.

“The PDP Constitution provides for a rotational Presidency. Section 3(c) provides that the Party shall pursue its aims & objectives by ‘adhering to the policy of the rotation & zoning of Party & Public elective offices in pursuance of the principle of equity,justice and fairness’.”