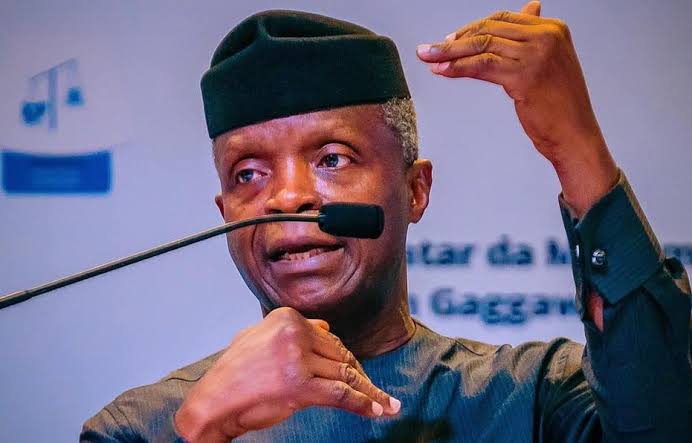 Vice Yemi Osinbajo has challenged Nigerians to speak well of their country wherever they find themselves.

The vice president gave the charge on Monday when he was entertained with gymnastics and acrobatic displays alongside stories of their experiences in national and international tournaments by members of TIG International Gymnastics Club, Abuja.

They visited Osinbajo with their coaches, parents and handlers, altogether a group of about 40.

After the remarks by the athletes and a video presentation of their participation in a recent championship in South Africa, Osinbajo expressed delight at the conduct of the gymnasts, their coaches and parents, especially as he was only becoming aware of the abundance of talents in the sport in Nigeria.

He said, “This for me is very heartwarming, intriguing and exciting because there is really great hope for gymnastics in Nigeria, especially people who are starting so very young.

“I want to commend TIG Gymnastics International, and of course, Coach Anthony Asuquo and other coaches and even the parents. I think you are pioneers of some sort in encouraging your children to be gymnasts.”

“I am greatly encouraged by what we are seeing, especially that so many of the kids are winning medals and doing well in gymnastics.

“I see a lot of the athletics categories and how well people are doing, but I think that we really have some great potential, and just seeing the video, it is evident that there is a lot of promise and talent that is available here in Nigeria,” Osinbajo said.

He thanked the two gymnasts, Dolapo Adedeji and Tomisin Babatunde, “for the very kind words. It is very nice to say that we have done very well.”

He commended the founder of the club for his efforts over the years, noting that areas of possible support from the government would be explored especially in ensuring that more talents are nurtured to national and international prominence.

Speaking after the remarks by the athletes and a video presentation of their participation in the recent championship in South Africa, Prof. Osinbajo expressed delight at the conduct of the gymnasts, their coaches and parents, especially as he was only becoming aware of the abundance of talents in the sport in Nigeria.

According to him, “this for me is very heartwarming, intriguing and exciting because there is really great hope for gymnastics in Nigeria, especially people who are starting so very young.

According to a statement by his media aide, Laolu Akande, the gymnastics club tutored by Coach Anthony Asuquo is blazing the trail, nurturing young talents and featuring them in several competitions already.

After the introduction of the delegation and brief remarks by their leader, selected members of the club took turns to speak about their experiences so far in the sport.

Multiple gold medal-winning athletes – Stephanie Onusiriuka and Tomisin Babatunde, and spokesperson of the club, also a youngster Dolapo Adedeji, spoke particularly about their experiences as international athletes, winning laurels for Nigeria, even as upcoming gymnasts.

Eight-year-old Dolapo Adedeji who spoke on behalf of the young gymnasts was full of praise for the Vice President especially for finding time to meet the team and “for all the good things you are doing for our country to make it a better place.”

She spoke about gymnastics training at the club and some of the challenges faced by athletes and officials, especially in the area of facilities, seeking the support of the government and well-meaning Nigerians.

Dolapo assured the Vice President that athletes at the club will continue to work harder to make their parents, the club and the country proud at both national and international competitions.

On his part, Babatunde who has bagged gold and 6 bronze medals to his credit so far, thanked the founder of the club and sponsors for the support given to him especially in actualizing his dream of becoming a professional gymnast.

Senate Seeks Removal Of CBN Governor As Board Chairman