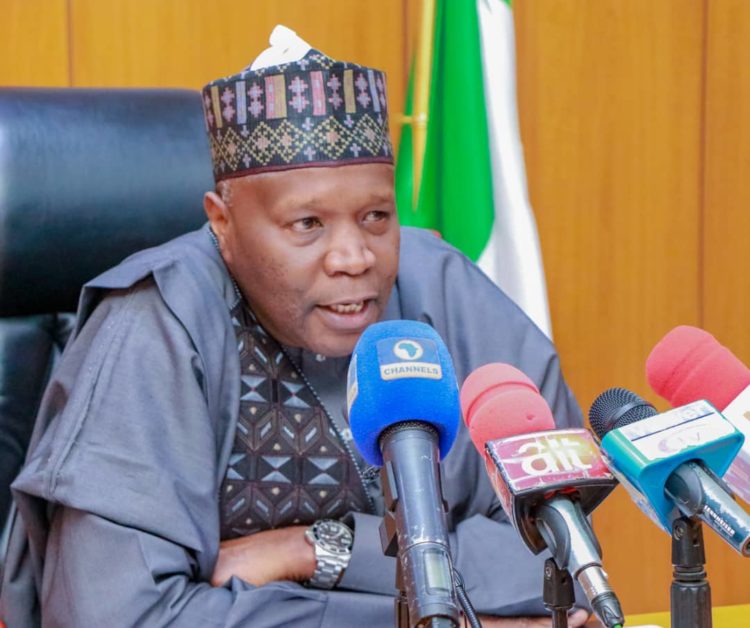 At the prestigious Royal Institute of International Affairs, popularly known as Chatham House in London, United Kingdom, Governor Muhammadu Inuwa Yahaya delivered a much applauded topical paper on ‘Political Leadership and the Universal Health Challenge Quest: The Impact on People’ were he aptly listed the achievements of his administration in the provision of uniform health care to the people of Gombe State.

The governor who was in London alongside 2 other of his Nigerian counterparts, Babajide Sanwo-Olu of Lagos State and Abdullahi Sule of Nasarawa State, participated in a high level event tagged, “Accelerating Universal Health Coverage in Nigeria”, on the invitation of Public Health Africa Policy Forum in collaboration with Centre for Universal Health, Chatham House.

Governor Inuwa was specially invited and offered the platform to showcase his administration’s achievements on the global stage in recognition of the genuine massive reforms taking place in Gombe under his leadership.

When it was the turn of the indomitable Dan Majen Gombe to speak, the magnificent edifice of Chatham House was enveloped in a pin drop silence, as the organisers, participants and resource persons present did not want to miss out on the pearls of wisdom flowing from the Gombe State helmsman.

Indeed, Governor Inuwa’s action-oriented reputation in the infrastructural and socio-economic spheres had long preceded him on the national and global fronts, thus his special invitation by the reputable institute.

The governor who spoke on the topic, “Political Leadership and The Universal Health Coverage Quest: The Impact on People”, noted that reforms in the health sector and beyond are critical political decisions that leaders must deliberately focus on and invest in, in order to strengthen the social contract between them and the people.

While sharing his perspectives on Gombe state’s journey towards the attainment of Universal Health Coverage, Governor Inuwa said that over the last 3 years, his administration has taken measures to revamp the health system for better service delivery.

This, according to him, includes the complete upgrade of the specialist hospital Gombe, revitalization of primary healthcare centres (PHCC)  across all the 114 wards of the state, the ongoing upgrade of general hospitals, as well as the establishment of Gombe State Contributory Healthcare Management Agency (GoHealth) to ensure financial risk protection for the people of the state.

Recall that Governor Inuwa,  had while campaigning,  promised to among others proactively implement strategies to achieve Universal Health Coverage in the state using Primary Health Care as the cornerstone to increase efficient, qualitative and affordable healthcare facilities and services as well as ensure availability of essential drugs, vaccines and immunisation across the 11 Local Government Areas of the state.

Apparently worried by the decay and poorly functional health system owing to years of neglect of this very important sector by past administrations, the Muhammadu Inuwa Yahaya-led government upon assuming office declared a state of emergency in the sector and set up a comprehensive agenda for the holistic overhaul of the system starting with the building of additional healthcare institutions, provision of medical facilities, equipment, training and retraining of healthcare personnel for better service delivery.

To ensure the effective coordination of health personnel, facilities and service delivery, the government, for the first time in the history of the state, established the Hospital Services Management Board.  Indeed, over the past three years, the present administration in Gombe State has recorded tremendous achievements across all areas of the health ecosystem.

Being the most passionate proponent of the Gombe Model of rapid infrastructural development and economic growth, Governor lnuwa Yahaya will no doubt, go beyond the health sector milestones at such an outing, especially during his sideline engagements with resource persons and prospective foreign investors with a synopsis of the specific projects and programs, his administration has put in place to make life more abundant for his people. At every given opportunity, Governor Yahaya is an unabashed cheerleader of the vital Gombe Project and he will brief his hosts on Gombe State’s status as the most favoured destination for foreign direct investment in Nigeria after bagging the No.1 position in the Ease of Doing Business ranking conducted by the highly reputed National Economic Council (NEC) under the distinguished chairmanship of the Vice President, Prof Yemi Osinbanjo. Issuance of business permits, corporate registration licences, and land occupancy certificates are devoid of red tape or bureaucratic bottlenecks as evidenced by the NEC ranking.

The holistic civil service reforms initiated by Governor Inuwa Yahaya has re-equipped, re-tooled, restructured and recalibrated Gombe State’s  ministries, parastatals and agencies for better service delivery. Investors are also free to invest in the ongoing Muhammadu Buhari Industrial Park as it will feature the incubation of numerous companies,firms and industries involved in agro-entrepreneurship, agro-allied, agro-processing and hi-tech services amongst others. As a prelude to the upcoming Gombe Investment Summit ( GOINVEST), the state’s highly trained and optimally skilled workforce and abundance of natural and mineral resources will be an added boon to foreign investors as is the peaceful, serene and tranquil environment currently prevailing in Gombe State, a far cry from the negative scenario reigning in some neighbouring states.

As Governor lnuwa continues to make positive waves in his overseas trip, there is no doubt that the dynamics for massive foreign direct investment in Gombe State will accelerate in leaps and bound as the days and years go by.