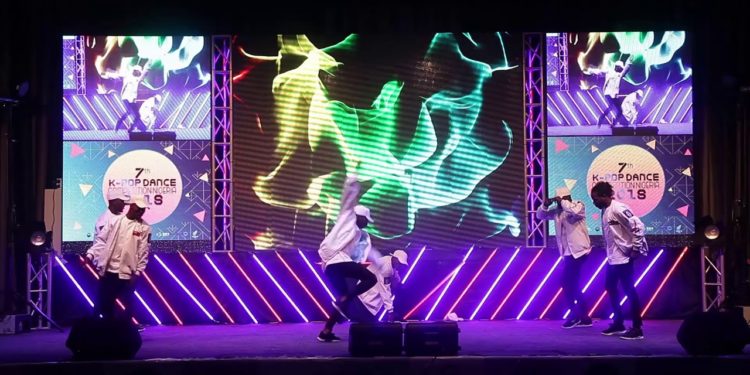 It was a hard-earned victory for CFly when the two-man group won the 2022 K-Pop Dance Competition in Abuja with the grand prize of N500, 000, and a chance to compete at the annual World K-Pop Championship later this year. Girl group, Euphoria, and boy group Supreme Six, placed second, and third in the competition to walk away with N300, 000 and N200, 000 respectively.

Godson Ogurie placed first in the Ambassador’s Singing category of the competition with a N300, 000 cash prize; while Matthew Gold and Dada Oluwaseun O. placed second and third in the category with N200, 000 and N100, 000 cash prizes.

Since his first contact with K-Pop in 2016, Chibueze auditioned with his dance crew Anti-Gravity in Abuja, to win but lost out in a head-to-head battle with the second placed K-Pop crew to miss the world champions in Korea. Second time around, Chibueze was disqualified from competing owing to K-Pop Contest terms and conditions, which disqualifies previous winners from competing.

“Based on the terms and conditions of the K-Pop Contest, past winners cannot compete or travel to Korea,” he said.  In solidarity with their member, The Fly Dance Crew, though qualified, refused to perform.

“There was five of us, and the four of us said, if he is not going to perform with us, we’d rather not perform at all,” concurred Chukwuemeka.

“Shoutout to the fly dance crew’s Vick, Bobby Blanksy and others. I was truly shocked but applauded the action they took for my sake,” said Chibueze.

The third time around, the 5’1 dancer coached his brother and some members of his old team to tryout for the competition. Their crew lost out once again at the head-to-head battle with another crew to miss out on the world championships.

At this point, most people would have given up, but Chibueze persevered.

“I told Chukwuemeka, “Bro, I am not giving up on K-Pop. I love K-Pop. I have been following K-Pop back-to-back and BTS is our favourite K-Pop artistes. And each time we returned to the competition we did so with a BTS song. To travel to Korea has always been a dream of ours.”

The fourth time around, the contest worked in their favour. Previous winners yet to win a trip to Korea were qualified to compete, and crews can be as small as two members. “That’s when I knew it was a call for my brother and I to compete together,” thrilled Chibueze.

But things didn’t go smoothly for the brothers. Prior to the D-day, Chukwuemeka had a hot water accident that scalded his legs, and Chibueze’s phone was stolen while back in school for his exams. They nearly missed the final round of the contest for being incommunicado. The brothers also spent their last monies and went borrowing to take safest route (by air) from Port Harcourt to Abuja for the ground finale. It was all worth it.

“We say a big thank you to Korea, for this unexpected win. But it is also by God’s grace that we are here, and by the special grace of Our Lady, Mother Mary.  Over the years we have been coming to K-Pop, we have learnt the act of performance, and patience. I observed that K-Pop artistes put their hearts and souls into every performance they bring onstage. We want to be like that, not just with K-Pop but in whatever we do in life. Whenever we go on-stage, we aim to carry everybody along from start to finish,” said Chinedu.

Their winning act, a dance performance to BTS’ Smooth Like Butter was fun, playful and original. Their movements and transmissions, smooth and natural. Their movements inspired by Michael Jackson, Zazzu (Nigerian dance step), and the Korean limited series Squid Games.

“We had just seen the series and thought it would work in our act, where we have to play a game. We have this card but at the end of the game, the audience which presumed that he (Chibueze) was the one who invited me to the game, will discover that I am the one who invited him. That’s why it is smooth like butter,” trilled Chukwuemeka.

But being a professional singer with decades of experience and a diverse repertoire of music, including K-Pop, helps.  Ogurie has been a fan of K-Pop since 2010. Some of his K-Pop playlist he sourced from K-Drama OSTs. His competition act, Song of the Wind by Cho Yong-Pil was one of his favourites.

“The song reflects about life in general and talks about what are the most important things in life. That through the things we see and experience based on the world we live in, it is an opportunity for us to grow in how to love the world, and love people more.

The singer attributes his win, first to God, and his efforts to communicate his feelings and emotions of the song. “There is a difference between just singing and being able to emote. If anything, that maybe got me the audience and judges’ approval, I would say it is my little effort to communicate my feelings through the lyrics I sang; which is the most important things in any performance.”

On what stood the brothers out, he said: “it’s their creativity and execution. Koreans have always emphasized that this is a cultural exchange. Besides this being K-Pop, they (CFly) infused our (Nigerian) culture. Creativity is one thing, and execution is another. I mean, come on, it was undeniable. There was no way they couldn’t win,” said the ex-BBNaija Housemate and winner, 2015 World K-Pop Competition.

Same goes for the soft and enunciable crooner, Victory Ubaku who despite her vocal ability, lyrics accuracy, fell short on creativity and stage charisma required to win.

“It is not just about singing. Even a good singer, needs to perform. It is different when you are singing at home to when you are performing onstage. The winner of the singing competition (Ogurie) had charisma. He killed it onstage,” Nelson added.

In his final address at the event, Korean Ambassador to Nigeria, Kim Young-Chae encouraged competitors who lost out at the final rounds to work towards 2023 K-Pop contest.

He further noted that beyond her record as Africa’s largest country, Nigeria has a huge potential in her culture. “I see great potential in Nigeria’s soft power, that is her culture, which includes music, dance, sports, singing, fashion, food etc. This type of event is also good for both national growth and individuals’ good health.”

The embassy, he said, will resume its National Day celebration this November, post a two-year hiatus (in 2020 and 2021) owing to COVID 19 pandemic and the resulting social protocols.

The 2022 K-Pop Dance and Singing Competition was organized by the Korea Culture Center Nigeria (KCCN), with the support of Korea Broadcasting Service (KBS) and … About eight dance crews and ten solo singers participated in the final rounds of the annual competition this year.