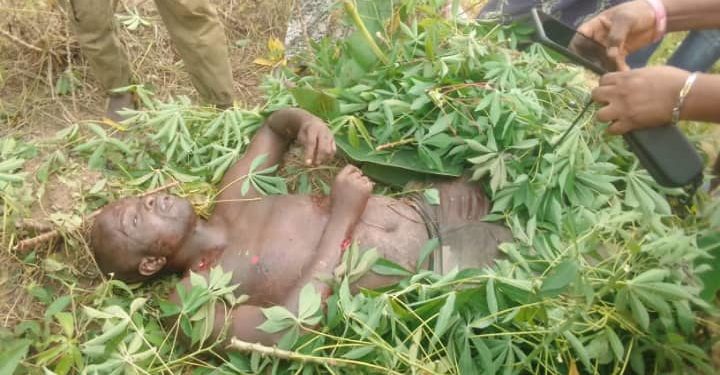 LEADERSHIP gathered that though motive for the killing was unknown in the community, howeved, the murder of the Paramount ruler and the CDC chairman was attributed to the lingering chieftaincy dispute in the community and the duo’s reported opposition to plans by some crude oil thieves to set up a bunkering camp in the area.

It was also gathered that while the deceased traditional ruler was abducted from his palace on Sunday to an unknown destination where he was dealt several machete cuts before he was killed, the CDC chairman was dragged out of his house and brutally killed in his backyard.

A source claimed that the deceased traditional ruler had been at loggerheads with some prominent persons in the community over the move to conduct election that will produce a successor to the throne due to the rotational agreement of four-year tenure.

It was also gathered that all efforts to conduct the election after the Community Election Committee (ELECO) had sold forms and screened two persons, were frustrated by the deceased monarch.

He was also accused of securing a court injunction and a State Government order stopping the election.

“It did not go down well with our people,” the source told LEADERSHIP.

Our correspondent also learnt that a popular crude oil bunkering merchant, who hails from the community, had mobilised his group to set up an illegal operation of crude oil bunkering camp in the bushes bordering Kalaba and Ikarama communities sometime early this year.

It was gathered that, the plan by the crude oil bunkering merchant was fiercely resisted by the deceased monarch and CDC chairman on the ground that any attempt to disrupt the activities of Nigerian Agip Oil Company (NAOC) would hinder the development of the community.

Our source further hinted that when their initial plan didn’t work, the merchant and his gang began to destroy pipelines in the area in order to secure a surveillance contract from NAOC, which they allegedly secured afterwards.

LEADERSHIP further learnt that, the deceased monarch and CDC chairman allegedly exposed the gang of crude oil thieves and took over the surveillance contract.

“When that happened, the gang started planning to kill our monarch and CDC chairman. In the process, a woman overheard them plotting the murder and gave them (the deceased) the information but they laughed it off and did nothing about it.

“So, on Monday, the community woke up to the story that our paramount ruler has been kidnapped by some gunmen at about 3am in his palace. We were all shocked and confused about what may have led to his abduction.

“When he drove into town, he was informed about this plot and advised not to enter the community but he refused. He said no harm will come to him. As he drove into the community, a popular Pastor stopped him along the road and pleaded with him to take a back road that would lead him out of the community.

“This time he still refused to take the advice. Just as the gang had planned, the moment he got to his house about 7pm, some men armed with guns and manchettes came out from hiding and dragged him to his backyard where they murdered him,” the source narrated.

It was further gathered that shortly after the killing of the CDC chairman, the killer gang allegedly sent a message to the the community that the monarch has been gruesomely murdered and gave them direction to where they would recover his corpse.

Reacting to the incident, the Project Officer/Head of Niger Delta Resource Centre of Environmental Rights Action/Friends of the Earth Nigeria (ERA/FoEN), Morris Alagoa, described the killings as “unfortunate and sad”.

He added that, “although, I don’t know what prompted this action but that environment used to be peaceful and livable.”

The spokesman of the Bayelsa State Police Command, Asinim Butswat, confirmed the incident and said the corpse of the Monarch was found at Ikarama community and that the police was investigating the matter.