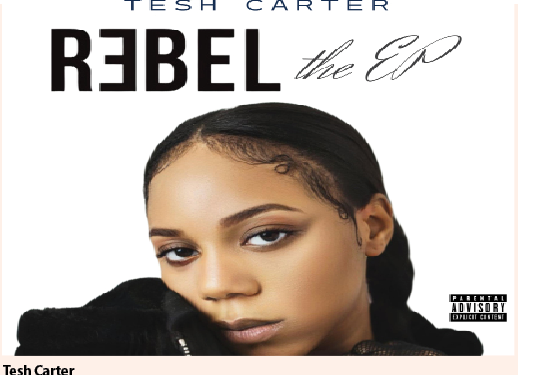 After a long run delivering several hits in the music scene, Tesh Carter arrives with her highly anticipated debut project, ‘’Rebel the EP’’.The 5- track EP is raw,sensual and an outstanding body of work with a breath of fresh air.

Tesh is ready to let the world hear her out with the release of this EP, that further projects her.

Speaking on the concept and why she chose ‘rebel’ as the title of the EP, the songstress who was discovered by famous music video director,Clarence Peters said;“The title is a reminder to stay true to what I believe in, to never conform to what’s believed to be the standard, to be excellent at everything I set out to achieve and to be unapologetically me”

She describes the EP as a classic body of work with great sounds, beats, rhythm and well composed lyrical contents. “This work for me is one of the best body of work from a female artiste this year. It is undoubtedly going to change the way music consumers digest sounds.”

Tesh has always had a passion for music. When she was in nursery school, she joined the music club. she also grew up in an environment where it was essential you explore your creative side.

Her dad made it clear to them, school education wasn’t everything. At a young age she was already singing and performing to guests that came to visit at school events, parties etc. It’s no surprise she took it up as a career.

Her style of music is greatly influenced by acts like Asa,Tuface, Psquare, Don Jazzy and so many others.

For some time she took a long hiatus from the music scene, a break which had music listeners and the industry asking where she could be and what was going on.

Carter insisted that the break was necessary to allow her rebrand her music and present something new and different from the norm to her fans.

“I decided to change the narrative and also change the game and I can’t wait to be putting out more records because I owe my fans great sounds.”

Tesh Carter’s “Rebel the EP” is currently enjoying massive airplay, and it is available on all major streaming platforms.