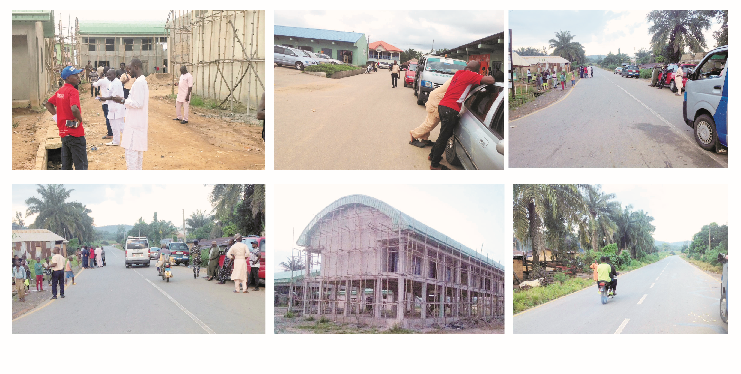 Residents interviewed during the media tour have passed their vote of confidence on the governor whose mainstay and blueprint beamed the searchlight on Nasarawa Economic Development Strategy (NEDS) as the driving force of the ruling party, the All Progressives Congress (APC),among other solid projects.

The current administration of the fourth democratically elected governor of Nasarawa State, under the leadership of Engineer Abdullahi Sule, no doubt has committed a huge amount of money towards the development of the 26 years of the existence of the “Home of Soild Minerals”. Available records have shown that the giant stride of the incumbent administration has left no stones unturned.

Shortly after taking over the mantle of leadership as the chief executive on May, 2019, he set the ball rolling by ensuring that all projects started by his predecessors are completed. Some of the projects are the state of the art Aliyu Akwe Doma Banquet Hall, which is now a cash cow for the state.

Other laudable projects completed is the renaming of projects after past governors of the state. These include the completion of the new Presidential Lodge after the immediate past governor, Umaru Tanko Al-Makura as Umaru Tanko Al-Makura Presidential lodge, the National Centre for Disease Control (NCDC), the ongoing Kwandare-Keffi Road, the speedy completion and handing over of Kwandare airport to the federal government, as well as fast tracking of the taking over of Farin Ruwa by the federal government.

It was a celebration galore interacting with broad spectrum populace in Toto local government, as majority of the populace expressed excitement for the opening of roads which was described as an essential artery for the development of every nation, according to Chinese scholars.

Engineer Sule, in Toto local government, commenced the construction of N4bn, Toto-Umaisha surface dressing road which is ongoing, upgraded to 48.1km asphalt overlaying. The chief Imam of Ugya, Mallam Jibrin Liman, expressed satisfaction with the kick-start of Toto-Ugya-Umaisha road network, and showered encomium on the administration for the recognition of those communities hitherto denied sources of livelihood.

While a councillor representing Ugya electoral ward, Mohammed Umar, in an interview with journalists during the assessment tour of projects conceived by the fourth democratically elected governor, said the upgrading of the road will service a large number of communities as well as open up the local governments.

He said that the governor has made them proud of the present administration, stating that the roads will boost security of the area as well the socio-economic activities of the state.

Other areas of interest to Engineer Abdullahi Sule’s government did not only focus on road networks, but also extended development to other sectors like the reconstruction and rehabilitation of public primary schools which are in comatose.

Engineer Abdullahi Sule, in Nasarawa local government, completed the 26Km Eyenu-Mararaban Udege and Odu roads, with residents of Eyenu community and the village head, Haruna Koki, expressing delight. The village head hailed the governor for the gesture as he explained the roads will enhance security.

He averred that the road when completed would address issues of insecurity, adding that his people are now able to sleep outside, unlike before.

The media team in Karu local government, the gateway to the Federal Capital Territory (FCT), also visited the Sani Abacha modern bus terminal, which was built exclusively to addressing the unabated gridlock causing nightmares to residents of Karu and other road users.

The executive chairman of the local government, Honourable Thomas Bako, in an interview, commended Engineer Abdullahi Sule for the initiation of the team. Also they visited the Peninsula housing projects which are at an advanced stage with few of the houses completed. The initiative, no doubt was meant to address housing deficit in Karu local government.

Honourable Bako, shortly after the inspection of the edifice, said the council would ensure that other vehicles operating outside the park, will in no distance time be compelled to take advantage of the new terminal in addressing the gridlock affecting residents of Karu as a result of illegal parking by the road side.

In Keffi local government council, the state governor in three and half years has executed projects that has direct bearing on the lives of the populace. Some of the legacy projects in Keffi include the building of the Ultra Museum, Keffi Square, Ultra Modern Market which will reduce the congestion and intermittent inferno in the neighbourhood market.

Other projects conceived by Governor Abdullahi Sule, is the building of the historic Antau Bridge that collapsed due to heavy downpour. They also awarded the contract for the dualisation of the single lane leading to Federal Medical Centre, to roundabout as well as from roundabout to old Kaduna Road junction.

Other roads are from the roundabout to the Emir’s Palace, Engineer Abdullahi Sule, in a bid to enhance and make efficient and effective the health care delivery sector in the last three years, constructed three Primary Health Care (PHC) centres at Angwan Majema, Goriya electoral ward and Angwan Waje which are still ongoing as well as the construction of Ibrahim Barde primary school.

Critical stakeholders in an interview expressed delight over the citing of key projects in Keffi, the council Chairman,Honorable Mohammed Baba Shehu during an interactive session of the media team, applauded the governor for the execution of projects that has direct bearing on the lives of the people.

According to him,”i can tell you that apart of Lafia, the state capital,Keffi was the first to benefits from the hands of fellowship of Engineer Abdullahi Sule barely four years in office”.

Iyal Aliyu Hassan in an interview applauded the state governor for his impactful projects in Keffi,he said some of the projects are the reconstruction road linking towns not only Keffi while Alh Muhammed Shuaibu ,the former  State trustee of the National Union of Road Transport Owners (NURTW) hails governor Sule.

In Kokona local government,Engineer Sule according available has done his best in fulfilling his campaign covenant with electorates by initiating embarking on projects that has direct bearing on the lives of the people ranging from electricity,schools,water resource, feeder and roads linking towns.

The executive Chairman of Kokona local government,Honorable Awwalu Adamu gave the hint during an interview with selected Journalists ,in the area of electrification projects opined that the governor embarked on connecting Angwan Jarme to the national grid by providing transformer to Angwan Jarme,Angwan Baduku,Kubere while the one of Mararaban Angoro to Angoro.

Others are the installation of transformer at Andaha, building and completion of Primary Health Care (PHC) under the Save One Million Lives (SOML) intervention.

Zakariya Mai Angwa, expressed delight over the completion of the project which he stated that will impact positively on the lives of the people.

Engineeér Abdullahi Sule also spents huge amount of money for the expansion and reconstruction of the entire building of Akwanga Guest house as well the construction of asphalt driveway from the main road into the structure.

A resident,Garba Kwarra,in an interview attested that the road construction has shown the determination and enthusiasm of the governor changing the narative.

“We are honored with what the governor has done so far in three and half years on the exalted seat”.describing the feat as a lease of new life for the people of Farin Ruwa traveling for almost an hour before the construction of the 15.5km road.

He again, said the state governor’ laudable effort to embarked on road construction to the Farin Ruwa site lead to the taking over of dam project by the federal government sometimes last year.

These shown clearly the policy direction of governor Abdullahi Sule whose zeal is to provide the needed basic necessities of life.