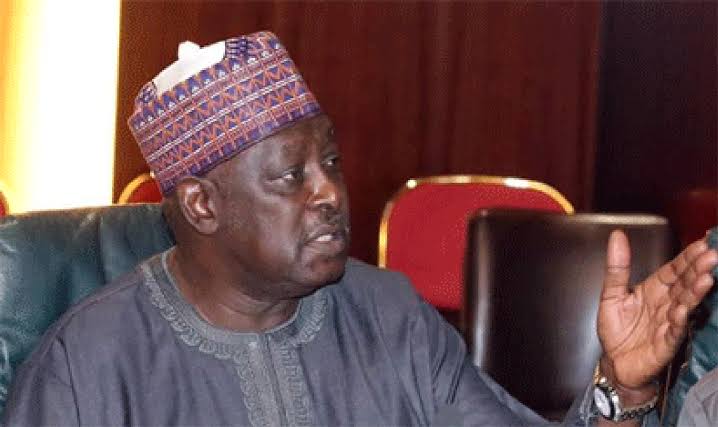 Former Secretary to the Government of the Federation, Babachir David Lawal, has described as ‘bullshit’, the statement credited to a presidential aspirant and national leader of the All Progressives Congress (APC), Asiwaju Bola Tinubu.

Recall that Tinubu had on Thursday stated that he brought President Muhammdu Buhari to become Nigeria’s President in 2015.

Tinubu made the comment while addressing the Ogun State APC delegates at the Presidential Lodge in Abeokuta.

He said, “If not me that led the war front, Buhari would not have emerged. He contested first, second and third times, but lost. He even said on television that he would not contest again.

“But I went to his home in Katsina, I told him you would contest and win, but ‘you would not joke with Yoruba matters.

“Since he has emerged, I have not been appointed minister. I didn’t get a contract.

“This time, it’s the Yoruba’s turn and in Yorubaland, it’s my tenure.”

Reacting to Tinubu’s outburst, Lawal noted that it was not only Tinubu that made the difference, adding that they were many others persons who supported Buhari and should never bragged about it.

Lawal who expressed his displeasure over Tinubu comment on Friday in a statement said, “Sometimes it is very difficult to support a Yoruba person in national politics if you are not one.

“They have a way of making you regret your support because they eventually make you seem like a traitor to your own people. Now all these comments about Bola’s Yoruba presidency and his support of Buhari without which Buhari would not have been president is bulshit.

“He wasn’t the only one whose support made a difference. There were many others from all around the country and they are not bragging about it.

“You may wish to know that all of us Buhari supporters are shocked and pissed off by Bola’s speech on this occasion. It is unlike him.

“And this speech is massively trending in the North and being given a negative connotation as you can well imagine. I first read it this morning on an Adamawa group platform and the anger is palpable and all round,” he added.

He further said, “You would think Yorubas will resist the temptation of joining in the northerners-bashing game at this very critical time – the primary election is only three days away. It is unfortunate that Bola himself chose to join in this bashing game – choosing to speak in the Yoruba language and in Yoruba land  in a manner that seems to denigrate Buhari. I could vividly imagine the discomfort of all the northerners sitting beside him on that podium.

This appears to be the Abiola saga being replayed. Abiola won the election with majority Northern votes but they took the brunt of the post-election protests that followed.

“Just survey all the people that are doing more meaningful practical things to enthroned Bola as president and you will find that almost all are northerners while his kinsmen engage themselves social media activism and Northern bashing.

“When Yorubas vilify the North like this, our sense of fear and insecurity under a Yoruba presidency gets heightened and in the end, pushes us to  rethink  our support for not only Bola but any Yoruba as president for that matter, please , do not join our opponents to destroy our chances of clinching Monday’s primary elections,” Lawal added.