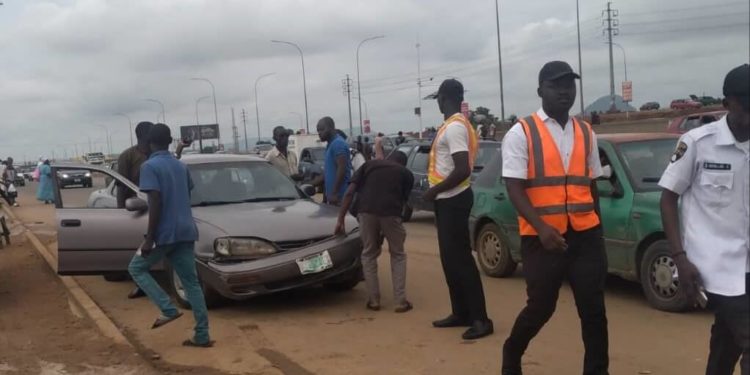 In a bid to rid the Federal Capital Territory (FCT) of increasing nuisances and infringements on the roads and pedestrian walkways, the FCT Directorate of Road Traffic Services (DRTS) has impounded no fewer than 34 vehicles.

The DRTS officials supported by a joint team of security and para-military agencies, yesterday dislodged motorists operating in illegal motor parks and pedestrian walkways, and the vehicles were impounded during the exercise which lasted for about one hour and thirty minutes.

It was observed that most of the vehicles confiscated include those caught parked on the pedestrian walkway and undesignated parking places as well as rickety and not roadworthy vehicles.

The assistant director, operations at DRTS, Mrs. Osho Deborah, who led the exercise, explained that it is a weekly operation, with the support of the FCT Command and Control, to rid the city of all the menace.

Also, the Head of Public Relations Division, DRTS, Kalu Emetu, said that in less than two hours, they were able to raid and impound 34 rickety vehicles within a section of the city centre.

Emetu decried that despite all the efforts the directorate is making to keep Abuja clean and rid the city of all rickety vehicles, many motorists are still operating without numbers, side mirrors, or appropriate windscreens and emitting thick smoke into the atmosphere.

On his part, senior special assistant to the FCT Minister on Monitoring, Inspection, and Enforcement, Ikharo Attah, while describing the DRTS operation as apt, said it will help to rid the city of all acts, which are in contravention of the nation’s capital city transport master plan as designed by its founding fathers.