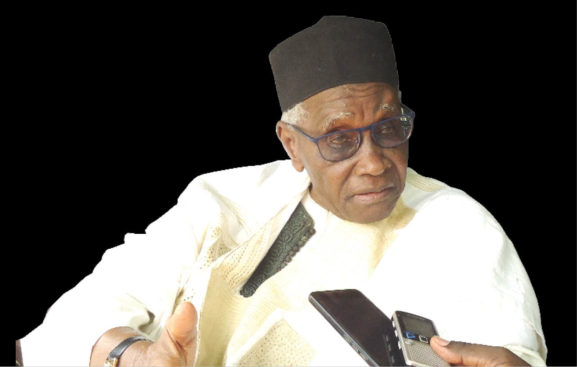 A new video released by bandits, who attacked the Abuja-Kaduna bound train on March 28th, 2022, has shown that Sadiq Ango Abdullahi, the son of the convener of Northern Elders Forum (NEF), Professor Ango Abdullahi, is still in the terrorists’ den.

On May 2, 2022, the media had reported that Sadiq was released after the family paid an undisclosed ransom. The reports quoted family sources as confirming his release.

It was however learnt yesterday that the family was expecting his release based on the negotiations it reached with the bandits, which later flopped.

In the new video, which hit the public domain yesterday, the victims were seen appealing to the government to meet the terrorists’ demand and rescue them from captivity.

The terrorists are demanding the release of eight of their children, who were purportedly arrested in Adamawa State.

Sadiq begged for the federal government’s intervention for their rescue, saying most of the 62 victims were sick.

He said, “My name is Sadiq Ango Abdullahi, one of the captives of the Abuja-Kaduna train attack. We are appealing to the federal government once again to come to our aid.

“We have been here for 62 days. Most of us here are sick and we are not in good condition. Every day the situation gets worse. We are appealing to the federal government to come to our aid before we start losing our lives.”

One of the kidnapped victims of the train attack and fairly old woman who identified herself as Mrs Gladys Moren in a new video released by the terrorists said she was a classmate of Vice President Yemi Osinbajo and appealed to the government to come to their rescue.

The terrorists in the video showed eight of the abducted passengers among the over 60 remaining abductees.

The new video, which shows eight victims, five men kneeling down and three women sitting on a blue trampoline, also shows one of the masked terrorists brandishing an AK 47 rifle.

The terrorists said the video was at the instance of the victims who begged to allow them to speak to the government.

One of the terrorists who introduced the video said: “We are the thieves that captured these people in the train along the Abuja-Kaduna route. The people are appealing to us that they want to talk to the government.

“So, we give them a chance to talk to the Federal Government and it is left for you (government) to listen to them or abandon them.”

It would be recalled that in recent past, Sadiq was widely reported by both conventional and social media platforms to have been released according to a close source to the family, only to discover that it was a mistaken identity. The new video has cleared all doubts about his whereabouts.

On her part, Mrs Moren said she is worried because she left a son who is a sickler at home. Speaking in tears, Mrs Moren appealed particularly to the vice president to come to their aid and ensure their rescue from the terrorists’ den.

She said: “My name is Gladys Moren. I am appealing particularly to Professor Yemi Osinbajo who was my classmate in 78/79 Law School. You are a grandfather and a father; come to our aid because we have been here for 62 days and I have a son who is a sickler; I don’t know his condition now.

Another victim, Maryam Abubakar, said she is with the terrorists with her husband and four children, two of whom are currently sick.

According to her: “My name is Maryam Abubakar, I am one of the captured passengers on the train with my husband and four children. We are appealing, our families and everyone that can help to please come to our aid. We have been here for 62 days in an unfavorable, inhabitable and unimaginable condition. We have been sick. In fact, two of my sons are currently sick and there is no medical supply.”

She also broke down in tears, saying, “we are appealing to the government to come to our aid.”

The video ended as another male victim who identified himself as Emmanuel Soji was about to speak.