In this piece, ABDULLAHI OLESIN reports that eminent Nigerians advised the nation’s leaders to imbibe the legacies of the late Justice Mustapha Akanbi in fixing Nigeria.

by Abdullahi Olesin
in Featured
0 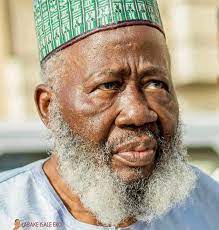 Sunday, 4th June 2020 was a day of tribute for the late incorruptible Justice Mustapha Adebayo Akanbi.

Justice Akanbi who died in March 2018 was president of the Court of Appeal and was appointment as the pioneer chairman of the Independent Corrupt Practices and Other Related Offences Commission (ICPC) in 1999 by the then President Olusegun Obasanjo.

Akanbi’s appointment as the chairman of the Nigeria’s first and foremost anti- graft agency was widely received with applause nationally and Internationally, including the critical Nigerian media which dubbed the Ilorin- Kwara State born jurist as Mr Integrity.

The late jurist exhibited so much uprightness in his endeavors during his lifetime to the extent that he voluntarily retired as the Court of Appeal’s President at the age of 68 when he still had few years left to clock the retirement age. Upon the completion of his first term as ICPC’s chairman, Akanbi also politely turned down a second term offer from President Obasanjo. Instead, he recommended another upright person and a Christian to succeed him.

All of this clearly showed Akanbi as a forthright personality and embodiment of contentment, selflessness and detribalised Nigerian.
It was therefore not surprising that four years after his demise, some best brains in the country, including academics, labour activists and religious leaders still believe that Nigerians and indeed, the Nigerian leaders still have much to learn from Mr Integrity.

Speakers at the the fourth year remembrance prayer for Akanbi in Ilorin, last Sunday were unanimous in their opinions that the Nigerian leaders should imbibe the legacies of Akanbi in fixing the country.

Mahfouz added: “The life that Justice Akanbi lived was an encyclopedia itself. His legacies will remain evergreen. People still benefit from Baba’s legacies after death. When Baba died, Ilorin became a beehive as people trooped in large number to grace his burial. I urge us all to emulate Baba’s exemplary conduct if we want to excel in life. The Nigerian media called him Mr Integrity.

“Apart from the fact that Baba was good in character, everyone testifies to his good conduct. He voluntarily retired as Court of Appeal president at age of 68 when he still had some years to spend in the service. He laid solid foundation for ICPC, but declined a second term; a rare occurrence in Nigeria.

“ He was described as an embodiment of piety.
One of the teachings of Baba is” don’t ask for too much in life, just ask for God’s guidance. Akanbi was
Nigeria’s Mr Clean according to News Watch Magazine, 2001.

“Baba’s attributes include simplicity, integrity, piety( Islam was his code of conduct) ; generosity, selflessness, tenacity, transparency, cosmopolitanism, patriotic who believed so much in the Nigerian project; meritocracy, contentment and non sit – tightism.”

In his goodwill message, the director- general of MINILS, Comrade Aremu described the late jurist as a very good lawyer and a very good judge.

“He was very optimistic about Nigeria, about Africa. He believed things can be better. He was not happy about the Nigerian situation, but he believed we can fix it. I’m following Baba’s footsteps in running MINILS. He taught us not to complain, but to strive to make things work. He left us with the power of prayer,” Aremu added.
He asked Nigerians and the Nigerian leaders to imbibe the late Akanbi’s ‘therapy’ that we should stop complaining about the Nigeria’s problems but rather should strive to fix things by finding solutions to the identified problems.
Also speaking, the former vice chancellor of the Federal University of Technology Minna, Prof Akanji, said “ Baba lived an exemplary life, simple life and was a good adviser.”
An associate of the late jurist and chairman, Mustapha Akanbi Foundation (MAF), Dr Mudashiru Salami said : “ Baba believed everyone can excel if he works hard and is upright.

The coordinator of MaaSalam Islamic Foundation,Alfa Olohuntoyin which organised the prayer session said the late Justice Akanbi founded the organisation in 2009 to assist the needy.

“We have built mosques for people, public toilets and we have freed prisoners by paying their fines,” he added.

The vice-chancellor of Kwara State University (KWASU), Malete, Prof Muhammad Mustapha Akanbi, said their late father taught them how to live independently by upholding the virtues of hardwork, prayer and integrity.

He recalled with nostalgia how their father would spent hours attending to other people’s needs at the expense of the needs of his children.
The prayer session was well attended by academics from the University of Ilorin and Kwara State University, Malete, Muslim clerics, members of the Mustapha Akanbi Foundation, members of Amicus Club, families, friends and associates of the late anti- graft ceasar.