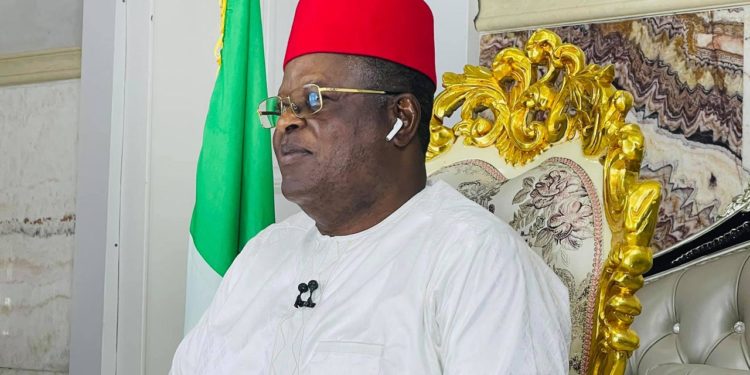 The Ebonyi State governor, David Umahi yesterday defeated his immediate younger brother, Austin Umahi and three others to emerge the candidate of the All Progressives Congress, APC, in the rescheduled senatorial primary election for Ebonyi South zone.

Governor Umahi scored a total of 250 votes to defeat his closest rivalry, Austin Umahi who scored 10 votes to come second in the primary election.

This is even as Princess Eze has disassociated herself from the rescheduled fresh primaries insisting that she remains the candidate of the All Progressives Congress APC for Ebonyi South senatorial zone.
Princess Eze said she stayed off from the ordered fresh primaries of the party election for the zone “because there was an Appeal for Stay on Execution on the matter”.
Announcing the result of the election which took place at the Afikpo North local government council headquarters, the chairman of the electoral panel, Prof Adebayo Kahinde declared Umahi winner of the election.
He said: “I, Prof Adebayo Kahinde, by the powers bestowed on me by the national working committee of the party, I declare as follows, total number of voters, 285; accredited votes, 275 votes; votes cast, 275; number of valid votes 268 while invalid votes are seven.
“I do hereby declare that David Nweze Umahi having scored the highest votes is hereby the winner of the primary election for Ebonyi South senatorial zone”.
In his acceptance, speech, Umahi said the winner of the election commended the electoral panel for the peaceful and transparent conduct of the primaries.
He also commended the delegates for the confidence reposed on him and assured them that the All Progressives Congress will emerge victorious at the forthcoming general election come 2023.