by Sunday Isuwa
in Cover Stories
0 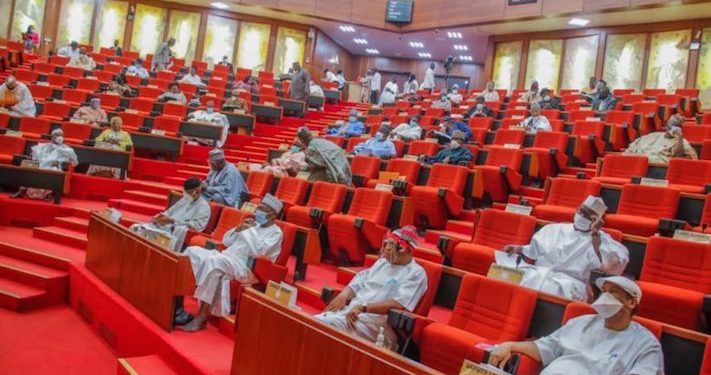 The Senate has challenged Nigeria’s security agencies to unmask the perpetrators of the Owo church attack in Ondo State.

According to the Senate, the security agencies should be discreet in collaborating on intelligence gathering and sharing to prevent future attacks by terrorists.
This was just as the chamber condemned the recent attack on St. Francis Catholic Church, Owo, and mourned the killing of worshippers.
This formed part of resolutions reached, sequel to the consideration of a motion on the “Killing of Worshippers in Owo, Ondo State.”

According to him, the attack led to the killing of 40 worshipers, with about 80 others suffering varied degrees of fatal injuries.
He stated that, “the attackers deployed dynamite and heinously massacred aged persons, women and children.”

The lawmaker, while noting the killings of Nigerians across different parts of the country, warned that such massacres could be a trigger to inter-religious conflicts and ethnic war in Nigeria.

Contributing, Senator Nicholas Tofowomo (PDP, Ondo South) said, “Our internal security is still very defective. We need to put our resources together and improve the Nigeria Police, so that what happened in Owo should not happen in other places.”
On his part, Senator Istifanus Gyang (PDP, Plateau North), blamed the attack on St Francis Catholic Church, Owo, on religious extremism.
He urged religious leaders in the country to desist from inciting their followers through religious messages preached in places of worship, adding that doing otherwise poses great security threat to the country.

The Senate President, Ahmad Lawan, in his remarks, said, “This is one sad event that took place, and we are all united in grief.

“One thing that is so imperative is for security agencies to continue to protect our citizens, and where we encounter breeches, the perpetrators must be fished out and then the law takes its full course.”

The Senate, in its resolutions, accordingly, urged security agencies to intensify efforts to investigate the matter with the aim of bringing perpetrators to book and as well deploy drones and helicopters to monitor forests and ungoverned areas in Nigeria, to identify illegal camps of armed bandits throughout the country.

The chamber urged for collaboration amongst her various security agencies on intelligence gathering and sharing in very discreet and organised form, at local government and state levels, and nationwide.

It also commiserated with the families of the victims, the Catholic Church, the people and government of Ondo State.

The chamber also observed a minute silence in memory of the victims killed during the attack.usly create criminal offences as the document states unequivocally that any platform or internet intermediary responsible for violating its provisions will be liable to prosecution and conviction.”
He argued that NITDA’s misuse of the term “Code of Practice” to describe the document amounts to acting under false pretences to dupe Nigerians into believing that the government is seeking to protect them when its real intention is so obviously to control social media and other internet platforms by compelling them to register with the government and thereby muzzle the right to freedom of expression online.
Longe contended that the document is a breach of Articles 19 of the Universal Declaration of Human Rights (UDHR) and Nigeria’s treaty obligations under the International Covenant on Civil and Political Rights (ICCPR), which gives everyone the right to freedom of expression, including the “freedom to seek, receive and impart information and ideas of all kinds, regardless of frontiers….”

According to him, “The name is problematic. Although it is termed a code of practice, it is in fact not intended to provide guidance for the implementation of any specific law or regulation.

“Rather, it creates criminal offences which are not contained in any existing law and attempt to legitimize them by a vague reference to its enabling Act and other laws, which is beyond the remit of any such administrative document.”

He argued that the underlying rationale and the provisions of the document are unrealistic and unreasonable as they defy logic and common sense.

“In today’s globalised world, is it possible or realistic to expect global Internet platforms like Facebook, Twitter and others to register with the government of every country in the world where they have users and set up offices in all those countries, which is the implication of the federal government’s demand?

“Conversely, Nigeria’s external broadcaster, the Voice of Nigeria, broadcasts its signal and content to dozens of countries around the world and runs a website that is accessible globally; is it registered and does it have offices in all the countries where its signals are received as Nigeria is now demanding of platforms registered in other countries?”

He, however, described many of the provisions of the document as arbitrary and draconian.

He further said the requirement that platforms take down “unlawful content” within 24 hours after receiving a notice or complaint from any authorised government agency constitutes an attempt by the government to control content published on social media and other online platforms while bypassing the judicial process and usurping the functions of the courts which should legitimately determine what content that is illegal or unlawful.

He said, MRA therefore, rejected the “Code of Practice” in its totality. It called on the government to abandon it and approach the National Assembly with an appropriate bill if its genuine intention is to address legitimate issues rather than violating the rights of Nigerians and other members of the public on the pretext of protecting them from fake news and misinformation.