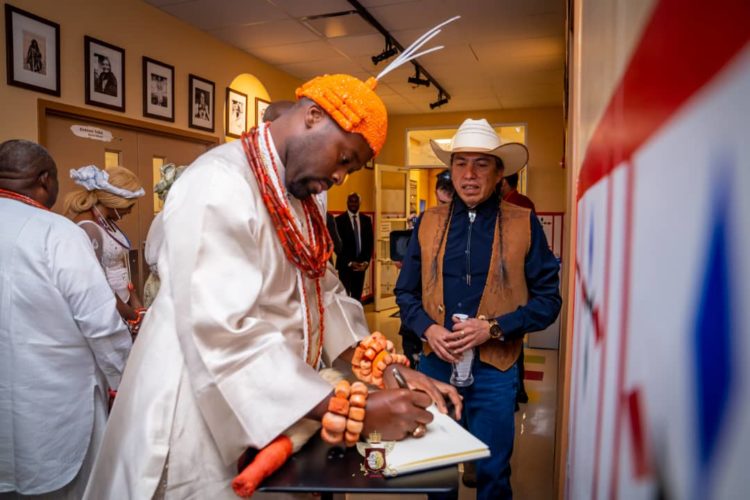 The Olu of Warri Kingdom, His Majesty, Ogiame Atuwatse III and Tsuut’ina Nation Calgary, Canada, has entered into a bilateral investment understanding to partner in the areas of renewable energy, agriculture, trade and cultural exchange.

This memorandum of understanding (MoU) was reached Thursday on the second-day visit of the Warri monarch to Canada during a roundtable discussion with business leaders and investors where they expressed commitment to explore to partnership for mutual interest.

Ogiame Atuwatse III, who was accompanied on the investment drive trip by his wife, Olori Atuwatse lll, High Palace chiefs and other member of the delegation also highlighted the rich potential of Warri Kingdom and harped on the need by all stakeholders to close ranks in order to address environmental degradation and the impact of climate change.

The revered monarch also embarked on a guided tour of Tsuut’ina nation in company of Andrew JR Onespot Xakiji Sidodi, who stated that they both share cultural similarities with Itsekiri nation.

An elated Ogiame, who gladly accepted the partnership, said it’s historic between T’suut’ina Nation and Warri kingdom because it has never happened in any nation in the Africa continent.

According to a statement released by Media Public Relation, Ifetayo Adeniyi Moses, he said: “After the tour of T’suut’ina Nation, in conclusion, Representatives of chiefs Andrew JR Onespot Xakiji Sidodi called on Executive Program Coordinator OZ consult, Ms Abi Goodman where the decision of the partnership was communicated to her.

“T’suut’ina Nation has agreed to partner Warri kingdom to First Nation of Canada so that the kingdom will benefit from trade , investment, exchange of cultural activities and educational assistance to the good people of Warri Kingdom.

“The decision was well applauded by Ogiame and the delegation. It was also made known that a later date will be communicated to perfect agreement.”

Saraki To Tinubu: Nigeria Bigger Than You, I Acted In National Interest