‘We Have Done 15 Arthroplasty Surgeries, Hip Replacement, This Year Alone’

In this interview with ABDULLAHI OLESIN, the chief medical director of Ilorin General  Hospital, Dr AHMED BOLAJI ABDULKADIR, an  Orthopaedic surgeon says, the hospital has performed 15 arthroplasty surgeries,hip replacement,kneel replacement and some revisions within this year.

by Abdullahi Olesin
in Feature, Interview
0 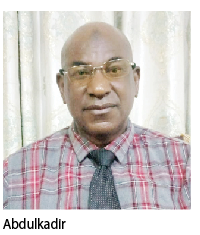 Can we meet you?

I’m Dr Ahmed Bolaji Abdulkadir, I work in Orthopedic Department;Arthroplasty which has to do with joints replacement,kneel arthritis.  This year alone we have done 15 Arthroplasty surgeries,hip replacement,kneel replacement and some revisions. I formerly worked  at the University of Ilorin Teaching Hospital (UITH)  before my appointment as the Chief Medical Director of General Hospital Ilorin.

Why is your  hospital  attending to patients in batches?

What we do majorly is thorough check, diagnosis, so patients won’t be spending money unnecessarily. We have the Emergency Department  and General Out Patients Department. Patients are expected to be booked before coming for treatment at the general outpatients department. Even in developed countries patients book to see doctor; GOPD supposed to be a cool case,it should be a case that can wait,accident and emergency unit takes care of emergency cases, irrespective of time. So, we are gradually moving to that, like someone who came in the morning and got number 70, he will be advised,he would be seen by 11am . Then such patient can go back to his office or anywhere he wants to go and later come back to the hospital and see a doctor instead of just sitting down idly. I think the  batch system is better,so let’s experiment new things aside what we have been doing since we were kids.

Does your facility have adequate personnel ?

They(personnel)  can never be enough, even in the  developed countries; even if they are, the space we have cannot be enough.

There are patients who needed to conduct test as small as blood test,they were told to visit private laboratories to do that. Why?

We have been on this for quite a time now. It’s just unfortunate and there have been so many crises  because of this. The Hospital Bureau is having a lot of running battle with laboratory  scientists. There was a time they went on strike. It got to a point  we felt we need to completely change our laboratory  scientists,they have to move a lot of people out and we are losing a lot of money to private operators of laboratories. But I’m positive that things will get better,at least we are having the cooperation of people in the laboratory now and  it’s better now, though we have some challenges. There are some basic equipment we need to get,very soon we will get them.

The state government approved the appointment of 197 medical personnel recently. Have they been deployed ?

They are yet to be deployed, but very soon I hope so.

What are challenges facing the that the hospital ?

There are many things on the table of the government and the funds are not forthcoming; that is all over the world. One thing we need to  look at is the Public Private Partnership(PPP) arrangement but unfortunately that is the beginning of the crisis with the laboratory scientists.

In every sector,they do a lot of PPP arrangement and it can come in different forms,the laboratory services,the radiology,but because it’s relatively new here,a lot of people are not aware of the practice, when they see that,they are afriad their jobs may not be secured. But we realized when private operators come in to run some departments,the government institutions steps up. The area we are looking at is equipment leasing; if there are private individuals who can lease their equipment,it will be good, because government can’t do everything.  I even think government spending on health sector is an aberration. What they need to do is provide everybody with health insurance cover and let the private sector take care of it, but the truth is the health workers  union won’t like it.

What is your take  on incessant strike actions by health workers in Nigeria?

Honestly I observed there’s a lot rivalry, unhealthy rivalry; like this group of proffessonals are enjoying this,why are we been denied?we need to agitate for this and get it. I think that is the main thing that is honestly fueling the crisis.

We should all realized  that even without the cleaners,we can’t get things done. If this place is not kept clean by a cleaner who is the lowest cadre, we can’t do anything,it shows everybody is important.

What would you suggest as solution to the incessant strikes  in the health sector?

It has to do with the government, government should be firm and frank, strict and reasonable. There are some times you have to be frank on some issues. When government is firm,frank and strict some of the things will wither off, because many at times people go on strike and you realize that what they are asking for is irrelevant, and when people believe you can get some things rightly or wrongly from government everybody will try to get it.  Another thing is that  the professionalism level of some people are so bad, the patient is the center of all of us but somebody needs to coordinate the caregiving. You can’t have two drivers driving a car at a time,all those stupid, unnecessary demands that brings rivalry,of what value are they ?People wanting to get as many degrees as possible to extend programmes. If I have a private hospital,I have the nurses, physiotherapists,radiographers, I know they are very very important; then for somebody to now believe he has to get degree or masters and be earning so so amount, the moment government can be  firm with all the parties and of course there are international practices and standard for everything. The fortunately thing about it is that the health sector is the area money can be made, but it also needs initial funding.  Thank God, the state government now feels there should be insurance coverage for every citizen.

Why is the hospital erecting new structures?

We need expansion. We can’t continue like this,most of the time the wards are filled,most of the time we have to go and  try to discharge patients in order  to create more space. The ongoing construction works  will help when completed,but we need more. What I’m thinking is like what His Excellency did for the intensive care unit (ICU). Though the ICU was there before when UITH was here but Governor AbdulRahman AbdulRazaq has expanded  the unit to one of the largest ICU centres that we have here. We can do the same thing to wards because there is need for expansion of wards. There is also needs for employment of more hands, although His Excellency had employed new medical personnel ,so we want to see how they will be deployed. There are some wards that have just been renovated but we couldn’t use them  because of inadequate  manpower

How has it been running the hospital since your assumption of office two years ago?

It’s been challenging, it’s been good. The people are good, hardworking, although they can get better than this Asides that we have a lot of potential, not only here, Kwara State as a whole.  People have a lot of confidence in healthcare that is provided by Kwara state. We have a lot of patients coming from Oyo state, and a large number of them from Lagos I think it’s just the believe that they can get things done well and cheaper, even from neighboring countries, healthcare can be a money spinning center, India is making so much money in the health sector.

What is your view on medical tourism?

What stops us from being the centre they will come to,why can’t other people from other countries come to us, the thing is been put in place gradually The first thing is to get things working,we have that ICU centre ,we have the new ward;  I don’t want to say VIP ward. God forbids,if the president should have a problem we can admit him in there. What we need to do is change the orientation of people working in the hospital;  that we just need to provide good care and of course good pay, people will be better trained.