Flood menace in Nigeria has become a normal and re-occurring phenomenon which often has devastating impacts on livelihoods and infrastructural development. ROYAL IBEH identifies the factors accelerating  the rate of th natural disaster 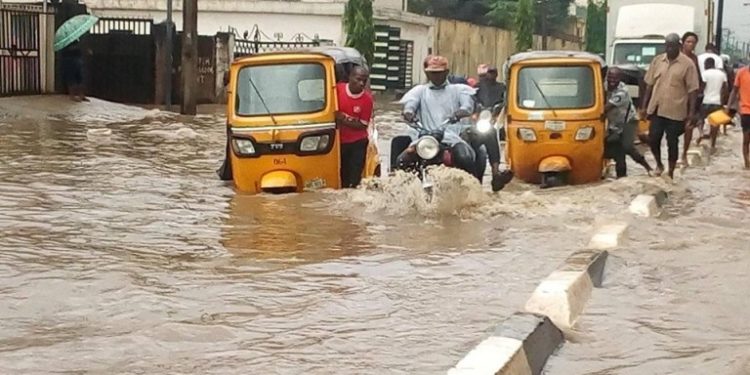 Already, the heavy downpour leading to floods in some parts of the country has caused fears of what likely may happen when the rains peak.

As we all know, the rainy season is a time all humans look forward to, as it helps to replenish vegetation, forming streams and rivers, cooling the temperature, and sustaining the lives of both humans and animals.

However, as crucial as the rainy season is to human existence, it is usually a devastating period, especially for residents living on the island and areas like Agege, in Lagos State, as they are often paralysed as a result of the flooding on their major roads and streets linking their homes.

When it rains in Lagos State, areas like Lekki, Ajah, and Ibeju-Lekki, which are perceived as places for the rich, are usually flooded even with little downpour, leading to heavy traffic jams on the Island.

For instance, the recent non-stop rain in Lagos led to heavy flooding in most parts of the state. In fact, most places in Sangotedo, Badore, Agungi, Ikota Villa and Agege, among others, were submerged.

For instance, the rainfall led to an incident involving two vehicles (a Lexus Jeep carrying three persons and a Toyota with three occupants) being swept away by the heavy flood around the Oyatoki area of Agege, Lagos state.

According to the South-West zonal coordinator of the National Emergency Management Agency, Mr. Ibrahim Farinloye, three of the victims were rescued alive, one jumped out to safety, while the remaining two were still missing.

The heavy downfall also trapped a lot of residents in their homes. “For the past four days, I have not stepped out of my apartment. My estate is covered with water. On Friday, I had to carry my electronics out of the house before another heavy downpour on Saturday. However, I could not move my chairs and my car, which has been taken to a mechanics workshop for repairs,” a resident of Monastery Road, Sangotedo, Lagos, Mrs Ogechi Emeka, lamented.

The road from Shoprite at Sangotedo to Goodnews Estate was also flooded. A resident of Goodnews Estate, Victor Coker, told LEADERSHIP Sunday that he has not been able to step out of his house for the past few days. “Most of my neighbours’ cars are gone. Water entered the houses of most people who are living on the ground floor, destroying their electronics and chairs. There is no way you will go out without wading through the muddy water,” he stated.

Sadly, Coker revealed that the people living on the Island have continued to experience this ordeal for decades without any intervention from the government. “This is not the first time we are experiencing flooding. Once it rains, people living on the Island do experience floods because there are no proper drainage channels and roads. For decades, the government has been sympathizing with us but that is the best they have done so far,” he stressed.

In the same vein, a resident of one of the estates on the Island, Pastor Monday Ojumah told LEADERSHIP Sunday that the main reason for the frequent flooding was the bad state of roads and poor drainage system.

“The roads are terribly bad. The potholes on our roads are appalling. Also, the Island is one way in and one way out, with no alternative routes. Hence, the continuous traffic gridlock which gets worse whenever it rains. To worsen the situation, our major roads do not have proper drainage channels,” Ojumah explained.

He reiterated that the Lagos State Government was not paying attention to the people living on the Island. “Residents in some estates are the ones fixing their roads, which ought not to be so. Just the way they are constructing roads on the mainland, they should do the same on the island,” he pleaded.

Ojumah said the non-stop rainfall that started last week damaged a lot of property and caused heavy traffic congestion on the Island. “Some of the estates were flooded. Water entered some people’s homes, simply because of poor drainage channels. Though I was not affected, I can’t even drive out of my house, because the streets from Goodnews Estate to the main Ajah Road are flooded,” he emphasized.

He however appealed to the government to come to their aid. “Lagos Island needs proper planning and good roads with proper drainage channels,” he added.

The heavy downpour being experienced in Lagos and other parts of the country was foretold by the Nigerian Meteorological Agency (NiMet) earlier this year. The agency warned of heavy rainfall and possible flooding in most southern cities from June 29.

It said heavy rainfall would characterise some states including Lagos, Ogun, Oyo, Osun, Ondo, Edo, Delta, Bayelsa, Anambra, Imo, Abia, Rivers, Akwa-Ibom, Cross River, and parts of Taraba. The agency also warned that there will be flooding of roads, low-lying settlements, and river channels in these states.

The agency, however, advised residents to avoid low-lying areas, desist from driving through running water, clear waterways of debris and avoid standing under trees and unsecured structures during the rainy season.

Ahove said the recent heavy downpour and change in the weather pattern is one of the signs of climate change, adding that one of the evidence of change in weather conditions also involves the situation of erratic rainfall and temperature change.

“What we are experiencing in Lagos is unpredictable rainfall; a situation of excessive rainfall, which is one of the evidences of change in the weather pattern,” he explained.

The researcher said, “No doubt, the heavy rainfall, which usually results in flooding, will cause serious damage to homes and the health of the people” adding that as predicted by NiMet, the flood is more prominent in Lagos because the waterways were being encroached upon and compromised.

“Another reason why we are having flooding in Lagos Island is because the topography in that axis is low, the waterways have not been adequately channelled and the drainages are not wide enough to contain the volume of water that is flowing on the roads. The drainages have to be wide so that the water can adequately flow,” he explained.

When there is flooding, Ahove said there will be loss of property and jobs, as people cannot step out of their homes. “There will be road blocks in nearly all parts of Lagos. In terms of food security, it can affect food supply. It can also lead to hazards, injury, and even death, as in the case of the two people who recently died in Lagos,” the research professor said.

“These hazards will continue to happen if the issue of climate change is not addressed,” Ahove said, stressing that, “If there is no change in the input of a process, we will always get the same result – destruction everywhere.”

He, however, recommended that the government should put more effort into channelling and widening the waterways.

“The government must ensure that houses are not built on waterways and must also sensitise the residents of Lagos to handle their waste materials (which often end up on the streets) properly,” he suggested.

Ahove said, “When there is a heavy downpour, people tend to experience cold, and those who are at risk the most are children and the elderly,” adding that the elderly are prone to pneumonia.

“Those who are susceptible to asthma may as well have a crisis during this period. There will be consistent cold because the rain will continue to fall. The flooding will also disrupt education, in that children will not be able to go to school. We should expect malaria outbreak in the areas that are affected by the flooding, due to stagnant water,” he warned.

Ahove recommended that people should take a lot of Vitamin C supplements and keep themselves warm at all times. “Keep your children and elderly warm. People should stay indoors as much as possible. People should also keep their environment cleaner. The Lagos Waste Management Authority (LAWMA) should be more effective during this period,” he suggested.

The Lagos State Government (LASG) has however apologised to the people over the devastating floods which ravaged major parts of the state last weekend.

The special adviser on Drainage and Water Resources to the governor, Joe Igbokwe, who made the appeal on behalf of the state government, said the floods were due to the coastal nature of the city.

“We acknowledge the damage done by the flood in Lagos and the losses. We apologise most sincerely for the pains and tears. We share the pains with those affected. Lagos is a coastal city that is prone to flooding. Everybody knows this. Lagos has the smallest land mass in Nigeria with 23 million Nigerians,” Igbokwe added.

“Some build houses on our canal setbacks making it difficult, if not impossible, for us to clear the drains. We need to change our attitudes to help us have a flood-free Lagos. Lagos spends huge amounts of money every year cleaning canals and aligning many of them with concrete. We will reduce flooding issues if we behave ourselves. Flooding is a global thing due to climate change. The other day, I witnessed massive flooding in Sidney, Australia. You need to see the casualties. We will continue to do our best in matters of flood management in Lagos. We are appealing to Lagosians to help us,” he concluded.

The Lagos State Sector Commander of the Federal Road Safety Corps (FRSC), Corps Commander Olusegun Ogungbemide has also warned drivers in the state to always exercise caution while driving, to avert the hazards associated with heavy rain and flood during the season.

Ogungbemide expressed worry that the heavy downpour is creating enormous traffic challenges resulting in the loss of lives and property and urged everyone, especially drivers to join hands to tackle the menace.

“The rainy season and heavy downpour being experienced almost every day in the state, leading to incidents of flood which sweep away vehicles and passengers, are becoming a daily occurrence. Our advice is that drivers must operate with utmost caution and safety consciousness to avert the hazards associated with the weather conditions. Drivers are advised to park at a safer place and allow the flood to recede before proceeding on any journey they embark on,” he stated.

‘We Have Done 15 Arthroplasty Surgeries, Hip Replacement, This Year Alone’

'We Have Done 15 Arthroplasty Surgeries, Hip Replacement, This Year Alone'