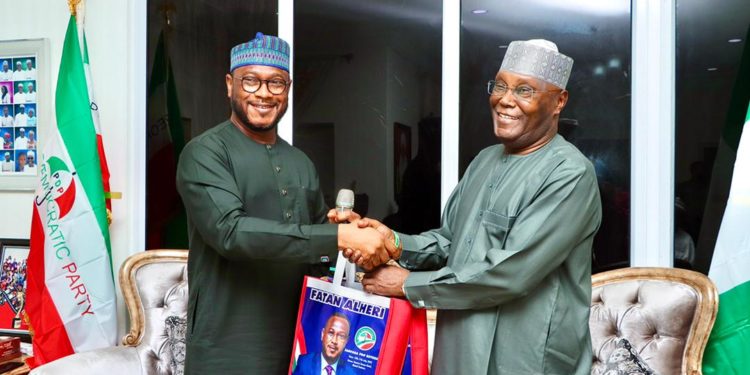 The presidential candidate of the Peoples Democratic Party (PDP) and former Vice President Atiku Abubakar, has assured the Zamfara PDP gubernatorial candidate, Dr. Dauda Lawal, that he will work to ensure that the PDP wins the 2023 general elections in the State.

The former Vice President was speaking in his residence in Abuja on Wednesday when Lawal led PDP officials and stakeholders in the state to pay a courtesy visit on the PDP presidential candidate.

According to Atiku, the only way to rescue and rebuild Zamfara was by voting out APC in the 2023 general elections.

“To achieve that, there is the need for having a united PDP which will be formidable enough to face any opposition no matter how difficult it may be.

“The best thing to do for the people of Zamfara State is to bring about peace, secure farms, and provide businesses. But the situation now is otherwise. We must unseat the APC to rescue and rebuild the state and the country. PDP administration would resuscitate the textile industry,” he said.

Earlier, the Zamfara PDP governorship candidate and former Executive Director at First Bank, Dr. Lawal, explained that he led PDP stakeholders and All Progressives Congress (APC) stalwarts that decamped to the PDP, to congratulate Atiku Abubakar on his victory at the party primaries, which gave him the presidential ticket of the party for the 2023 general elections.

Lawal expressed confidence that Nigerians are now comfortable with the PDP having felt the brunt of the bad governance of the ruling APC.

“Getting these stalwarts is a big harvest for PDP in Zamfara state, considering the caliber, status, and political value of the persons that left the APC,” Lawal told Atiku.

To wrap up the visit, the Zamfara PDP candidate presented to Atiku a hand-made PDP regalia as a symbol of what Zamfara State represents.