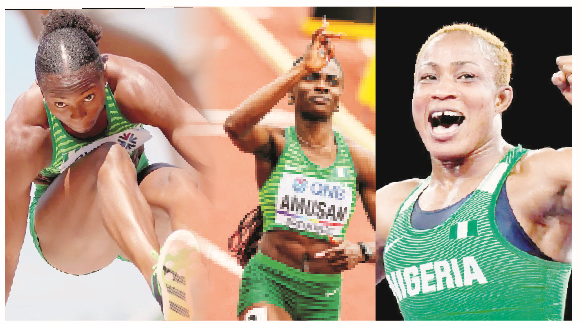 With the World Athletics Championships Oregon over, attention has now shifted to the 2022 Birmingham Commonwealth Games where no fewer than 5,000 athletes from 72 Commonwealth nations and territories will jostle for 280 medals on offer as the Games begin today.

Nigeria is one of the competing countries and will be represented with 93 athletes comprising 41 male and 52 female who are ready to take on their counterparts from rest of the Commonwealth countries for battle of supremacy in nine sports.

Fresh from smashing a world record at the 2022 World Athletics Championship, Tobi Amusan will be aiming to defend the gold medal she won at the 2018 edition of the Games in Gold Coast, Australia.

Also, silver medalist at the just concluded World Athletics Championship in Oregon, USA, Ese Brume, will be the cynosure of all eyes in the long jump event.

Brume, who is the first Nigerian athlete to win medals at two World Athletics Championships after upgrading the bronze medal she won in Doha in 2019 to silver in Oregun, is aiming for a gold medal in Birmingham.

The Olympic bronze medallist leaped 7.02m and finished behind Germany’s Olympic champion Malaika Mihambo, who leaped 7.12m, and Brazil’s Leticia Oro Melo jumped 6.89m to take bronze. in which she won bronze at the 2020 Tokyo Olympics.

In wrestling, Tokyo Olympic silver medalist and LEADERSHIP Sports Person of the Year 2021,

Blessing Oborodudu, also seeks to defend the gold medal she won at the last Commonwealth Games in Gold Coast, Australia in the Women’s -68kg category, While Odunayo Adekuoroye will defend her crown in the -57kg category, just as Aminat Adeniyi who won gold in the -62kg event.

The Table Tennis contingent led by Aruna Quadri, which includes Olajide Omotayo, would be aiming to improve on the silver medals they earned from Gold Coast.

Nigeria’s athletes competing in the powerlifting event will also be aiming to beat all-comers, and better the four gold medals the country won at the Gold Coast Games courtesy of Roland Ezuruike, Esther Onyema, Ndidi Nwosu and Abdulazeez Ibrahim.

Nigeria’s para athletes, amongst the best in the world, would for sure provide stern tests to their challengers from other nations with Yetunde Odunuga and Millicent Agboegbulam set to improve on their bronze medals achievements in Boxing from 2018.