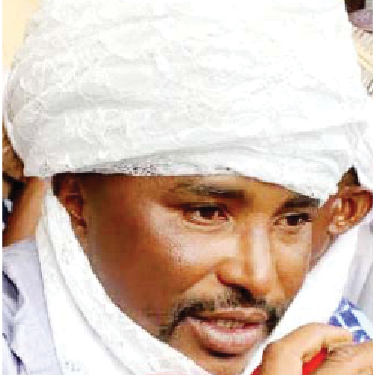 The emirate described Aleru as a “repentant bandit leader and peace promoter”, who has helped the community to ensure that farmers have access to farms without any attack.

The spokesperson of the emirate, Lawal Magaji, told journalists that Aleru is considered as a peace-maker within the emirate.

Apparently referring to the conferment of the traditional title on Aleru, Magaji said, “With this development, the people of the emirate can now go to their farms without fear of bandits attacks.

“He has been trying to stop banditry within the emirate and we have seen positive changes. The conferment of the title of Sarkin Fulani on Adoi Aleru would give him more power to control the entire Fulani people within the emirate. It will also enable him to check the activities of the recalcitrant bandits and take action against them within the emirate.

“I want to use this medium to appeal to the entire people of the state to look at this as the best option to address the issue of banditry. This is because the bandit leader has repented and is now fighting those who have refused to surrender,” he said.

Soon after the emir honoured Aleru, the Zamfara state government via a public announcement signed by the secretary to the state government, Kabiru Balarabe, dissociated itself from the turbaning of the bandit by the Emir of Birnin Yandoto in Tsafe Local Government Area.

Thereafter, Governor Bello Mohammed Matawalle suspended the emir and set up a committee to investigate the circumstances leading to his action

He directed Alhaji Mahe Garba Marafa, who is the district head of Yandoto to take charge of the affairs of the emirate.

Aleru was declared wanted by the Katsina Police Command, which alleged that he killed 100 persons in the state.

Some of the concerned citizens in the emirate shared their views on social media and faulted the stand of the state government, especially claiming ignorance of the turbaning of Aleru.

One of the posts on Facebook read, “At the time when the residents of Mada, Ruwan Bore, Yandoto and environs were suffering from incessant bandits’ attacks, nobody cared to even symphasise with the us.

“Farmers were banned from farming activities in the area, but with the reconciliation with the repentant bandit, Ado Aleru, peace reigned in the area and residents were allowed to farm freely.

“There was no option other than to reconcile with the bandit kingpin, we were solidly behind the decision of the suspended emir on the conferment of the title of Sarkin Fulani on Ado Aleru.”

The post added that the turbaning of Aleru was performed at the instance of the chairman of Tsafe local government area, Alhaji Samaila Mudi and the commissioner for security affairs, DIG Mamman Tsafe (rtd).

Some residents told LEADERSHIP that the conferment of the traditional title of Sarkin Fulani on Ado Aleru was in the interest of the people as a means of having peace in the areas hitherto ravaged by bandits.

One Hassan Yankuzo said he welcomed the turbaning of the bandit leader because it has paved the way to the attainment of peace in the area.

According to him, the residents have been facing a series of attacks from bandits but following the peace accord with Aleru, that has become history as people now move freely and even work on their farms without any threat.

Also, in an interview, Hajiya Jumma Nabakuwa, stated that Aleru being an indigene of the emirate intervened in the prevention of banditry within the area.

She said the people of the council could testify to the impact of the reconciliation with the repentant bandit.

Nabakuwa expressed the hope that the action of the state government would not affect the peace being enjoyed by the residents in the area.

Also, Mujtaba Damo Yandoto expressed reservation over the suspension of the emir.

He urged the state government to be fair in handling the investigation of the emir, claiming that the monarch who was appointed about two months ago, can’t turbaned Aleru without the approval of the government

We Killed ESN Members, Not Wedding Guests In Imo – DSS