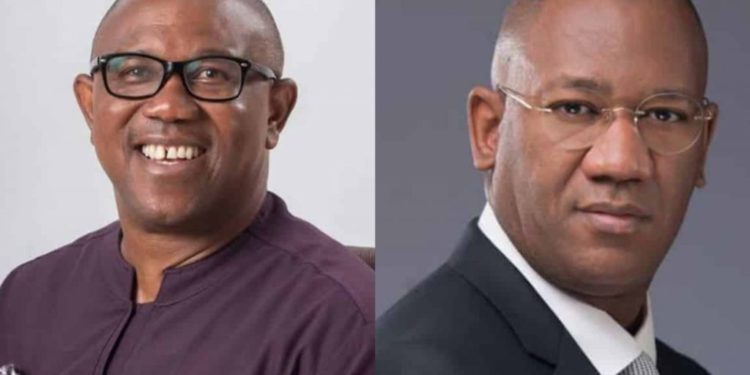 The Labour Party presidential candidate, Peter Obi yesterday officially unveiled his running mate, Dr Datti Baba-Ahmed stating that the over 100 million Nigerians that are hungry are their party’s structure in the 2023 general elections.

Presenting him to party members in Abuja, Obi said Baba-Ahmed’s choice has kick-started the party’s journey for Nigeria rebirth and rescued it from the primitive politics of ethnicity.

He said Baba-Ahmed was eminently qualified to bring his private sector and academic experiences to bear as they embark on a march to a secure, united and productive Nigeria.

He said over 100 million hungry Nigerians and 35 million unemployed, including unpaid pensioners remain their party structure that will deliver victory for the Labour party in the 2023 elections.

The presidential candidate noted that in the coming days the party will unveil its manifestos which are expected to be anchored on the global Sustainable Development Goals (SDGs) agenda.

Obi said, “It is my honour to inform you, my fellow Nigerians and especially the OBIdients, that finally, after a very long and wide consultations, we in the Labour Party have a found an eminently qualified Nigerian, who will be my partner as we embark on our march to a Secure, United and Productive Nigeria.

I have the distinct honour of presenting to you, my friend and running mate, and God willing, the next Vice President of the Federal Republic of Nigería Senator Yusuf Datti Baba-Ahmed, who has been described as ‘one of Nigeria’s youngest and brightest personalíties, who has distinguished himself in various areas of human endeavours”.

He is a recognized wealth creator and manager; who fits well into the mold of a transformative and adaptive leader. great personal, academic,” he added.

“ Securing, uniting and making Nigeria productive require steady and trusted hands. I am confident that with Dr. Yusuf Datti Baba-Ahmed by my side, we shall ensure that in moving Nigeria forward, no state or community will be left behínd.

With human capital development as the core premise, we will pursue proactively, well-articulated strategies and intrusive policy coordination and implementation, aimed at tackling the key challenges that are routinely of utmost concern to domestic and foreign investors.