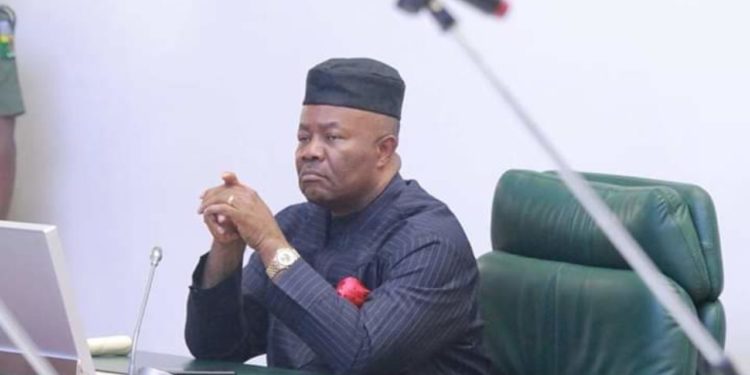 Ahead of the 2023 general election, the resident electoral commissioner (REC) in Akwa Ibom State, Mr Mike Igini, has reiterated that Senator Godswill Akpabio, currently in tussle with former deputy inspector general of police (DIG), Udom Ekpoudom, for the Ikot Ekpene senatorial district ticket would not be on the ballot, after all.

According to him, his emergence in the purported re-run primary last Thursday, contravenes key provisions of the 2022 Electoral Act as amended.

Speaking in an interview in Uyo, the Akwa Ibom State capital, Igini explained that “so many politicians are still relying on the repealed 2010 and 2012 Electoral Act”.
His words, “By virtue of Section 31 of the 2022 Electoral Act, the only way somebody can be replaced in any form is that we no longer have substitution by political party. What you have now is withdrawal by individual or nominee and or death.

“The law is not saying you should go and kill people so that you can have yourself on the ballot. No! The law is saying that those who have emerged at all levels up to the presidential level, you can decide that you are no longer interested.

“You can write an application signed by yourself, delivered to your party who will now deliver to INEC but nobody can shave the political head of another person in his or her absence.

“The report of the Akwa Ibom North West Senatorial District APC primary as submitted to INEC headquarters in Abuja is final. It is concluded. The train has left the station. The timeline is clear.

“All those who are in politics should go and study the 2022 Electoral Act very well. I hear people talking about substitution. If you look Section 31 and Section 34 of the Electoral Act, those of you who are still carrying the old idea of the 2010, 2012 Electoral Act in your head, thinking you can substitute willfully, it is no longer so.

“The rerun can only be conducted between and among those who participated in the first Senatorial election of May 27, 2022, and the Senatorial primary for Akwa Ibom North West Senatorial District was not canceled, was not nullified, was not inconclusive. It was conclusive, it was concluded and the report was written and it is final because you cannot reopen that anymore.”

According to Igini, the clarification became necessary following series of controversies and criticisms against himself over his insistence on following the due process of law in the runup to the polls in 2023.