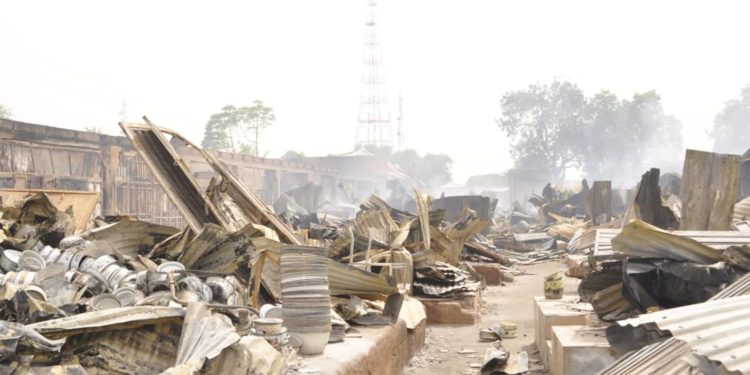 Shop owners at the Student Centre of the Yelwa Campus of the Abubakar Tafawa Balewa University (ATBU) in Bauchi are counting their losses following a fire incident which left 42 shops and property worth millions of naira burnt on Wednesday evening.

It was not established yesterday at what time the fire started but many residents believed that the fire possibly started at about 2am and was reportedly caused by an electrical fault.

When LEADERSHIP visited the scene, sources in the university said no fire service officials were available to help save the situation.
An eyewitness told LEADERSHIP that the School’s Fire Service close to the main gate of the institution could not salvage the situation because their truck was in bad shape.

“I learnt that when the fire started, they alerted the University Fire Service but they said that the battery of the truck was faulty. They said they’ve reported to the management for the release of money for it to be fixed or for a new one to be bought but nothing was done.

A shop owner, Prince Hosea Mathias, said he got a call at about 4am from someone informing him that their shops were on fire.
He said he was informed that the fire was caused by an electrical fault, “and I was also told that all efforts to get the fire service to come proved abortive; by the time I got there later in the morning, I discovered that all the shops were burnt down.”

All efforts to get the reactions of ATBU authorities failed as no official was ready to comment on the incident.