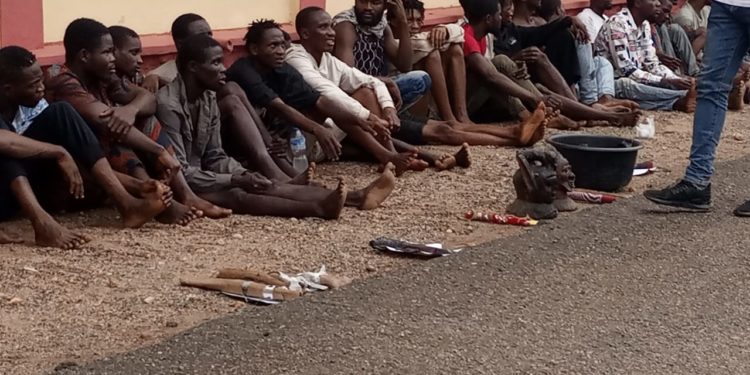 This is just as the command disclosed that a total number of 93 suspected cultists from different confraternity groups arrested between March 2022 till date are currently undergoing prosecution in the state.

The command’s public relations officer, Abimbola Oyeyemi disclosed this on Thursday while parading 42 suspects arrested whose crimes ranged from murder, to kidnapping, raping and murder among other crimes.

Among the suspected criminals paraded was a 29-year-old fake kidnap victim, Segun Mafimidowo, who connived with some of his friends to demand for a sum of N8 million ransom from his parents under the pretence that he has been kidnapped by some unknown gunmen from Sagamu area of the state.

“He also sent a picture where he was tied on both hands. The purported abductors later sent an account number of one Ogbu Abraham in which he directed the parents to pay the ransom to. But the anti- Kidnapping section of the command embarked on a technical based investigation which led to where Segun Mafimidowo and his so-called abductors, who are all his friends, were hibernating”.

Oyeyemi, who explained that the numerous arrest of secret cult members was part of the relentless efforts of the command at checkmating activities of cultists in the state, also paraded the trio of an 18-year-old Daniel Njoku; 21-year-old Damilare Ogundiran and Olamilekan Adebayo for allegedly abducting a 15-year-old girl sent on errand by her parents.