As the countdown to the 2023 governorship election in Katsina State continues, GODWIN ENNA examines the candidates jostling to succeed Governor Aminu Bello Masari. 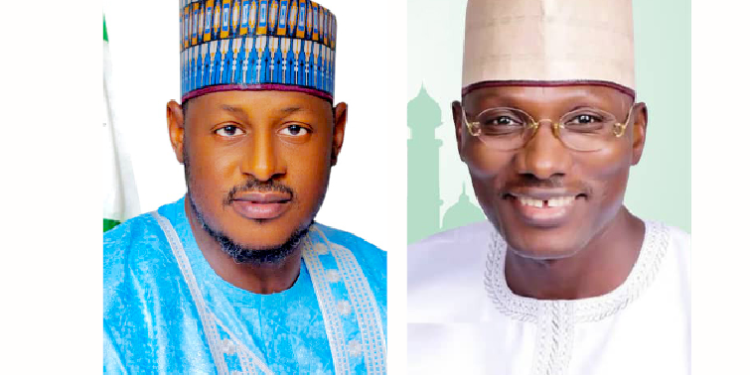 The battle to succeed Governor Aminu Bello Masari of Katsina State is heightened, following the conduct and completion of parties’ primaries which led to the emergence of various gubernatorial flag bearers in the state.

About five flag-bearers of various political parties are in the race including ruling All Progressives Congress (APC) candidate, Dr Umar Dikko Radda, and candidate of the main opposition Peoples Democratic Party (PDP), Senator Lado Yakubu Darmake. These leading challengers are already unfolding strategies to outwit each other and win the guber seat.

Other parties’ candidates jostling to succeed the governor include, Nura Khalil of the New Nigerian Peoples Party (NNPP), Imrana Jino of the People’s Redemption Party (PRP) and Ibrahim Zakkari, candidate of the Social Democratic Party (SDP).

Already, political gladiators and stakeholders in the state have regrouped ahead of the much anticipated contest which is generating a lot of alignments and defections among other intrigues in the state.

Essentially, the APC candidate, Dr Dikko Radda who is seen by many as a serious prospect stands a better chance of winning the governorship seat, especially with his recent outstanding display at the guber primary where he edged-out bigwigs and chieftains of the party, surprising pundits who are now seeing him as the man the cap fit.

Aside from being a former director-general and chief executive officer of the Small and Medium Enterprises Development Agency of Nigeria (SMEDAN), Radda has been a politician, entrepreneur, teacher and banker with wide administrative experience at the local, state and federal levels for many years.

Analysts believe that his emergence changed the political narrative and mindset of those who doubted his political capacity, considering that he had just the youths and women rally around him to poll 506 votes to emerge victorious in the primary.

For pundits, the enormous support he has received from that constituency is nothing short of the peoples’ payback for his philanthropic gestures rendered to the thousands of vulnerable households, youths and women through its ‘Gwagware Foundation’.

Though the APC flag-bearer is faced with some serious challenges, the manner he emerged as the candidate at the governorship primary as well as the legislative primaries held in June this year, did not go down well with a cross-section of the party faithful. This led many of the aggrieved aspirants and members to revolt in different ways as some defected to opposition parties while others remained in the party.

Pundits, however, acknowledge that the internal crisis rocking the party is deepening, threatening the party’s cohesion and chances of winning the 2023 governorship and other key elective positions in the state if not attended to promptly and robustly.

They are optimistic that Radda as APC candidate has the support of the government and APC members to win the governorship seat, especially with Governor Aminu Bello Masari who seized power from the PDP in 2015 and now the leader of the party in the home State of President Muhammadu Buhari, would not by any means afford to abdicate power to the opposition.

Nevertheless, some reviewers are equally alleging that the present government has performed below expectation to convincingly win the support of the electorates, hence this may hinder Radda’s election in the 2023 poll, especially in areas of infrastructural development and security where the APC-led administration failed compared to the past PDP Government under Bar. Shehu Shama.

According to them, the degree to which the people have become wiser in assessing those who will represent them in handling the affairs of state, would go a long way in deciding the fate of the ruling party and its candidate.

The PDP flag-bearer, Senator Lado Danmarke, is another strong contender whose pedigree has made him gain unflinching support, mostly at the grassroot.

The one-time senator, House of Representative member and chairman of Kankara local government area, contributed immensely to the growth and development of the state and PDP, which made him popular among the people. This reality, according to pundits, is driving his enthusiasm to win the forthcoming gubernatorial contest.

Senator Lado’s ability to unite all stakeholders and chieftains of the party into a collective struggle ahead of the polls will be key as well.

A factor that analysts perceive may weaken his chance the geo-politics of the state heading into this election. He is from southern zone of the state, the same part of the state that produced the incumbent Governor Masari, who will complete his second term in office next year. So if power rotation agitation  is anything to go by, the PDP candidate faces an uphill task on this score.

Another factor the PDP candidate has to contend with is the notion of some people accusing him of often compromising his election in the past gubernatorial election he contested. The allegation is said to have discouraged some of his loyalists and party members in the state.

There is also doubt about whether the support of renowned Katsina-based businessman, Dahiru Bara’u Mangal to for Senator Lado to win the governorship seat will amount to much.

A school of thought argue that the business mogul is beginning to lose his impact in the state because of the incident that took place at the APC guber primary where his anointed aspirant, Abbas Masanawa failed to pick the ticket despite having huge resources.

But others believe that his financial strength and popularity are still relevant as far as Katsina politics is concerned. The role he played in bringing Governor Aminu Masari to power in 2015 is still fresh on some minds.

However, the strategy of the PDP candidate picking Arch Ahmed Yar’adua as his running mate is a boost for the PDP family. The belief is that Arch. Yar’adua would bring more votes from the Katsina central in addition to the overwhelming support the party has already gained.

The Peoples Redemption Party (PRP) candidate, Imrana Jino, has been so confident of winning the election that he sometime back announced that he would be declared winner of the poll before 12:30 pm on Election Day.

Critics who note the zeal of the candidate of a party says so on the backdrop of the party’s good structures at all levels due to its long historic existence. The legacy of Late Mallam Aminu Kano and Balarabe Musa as founding fathers of the party still resonates among the party loyalists.

However, pundits argued that the PRP candidate risks not making much impact as far as the governorship contest is concerned, given its seeming ineffectiveness in unfolding political activities that would have further entrench the party’s presence in the wards, local and state governments.

Another governorship flag-bearer that pundit fear might not make much impact, is the SDP candidate, Ibrahim Zakari, who recently defected from the NNPP to pick the party ticket on grounds of alleged manipulation of the party’s primaryy election. He however came into SDP with high expectations to win the governorship seat.

Though Zakari has been a great politician, analysts are in doubt that party’s structure can hold water when the going gets tough in the race to succeed Masari.

The NNPP candidate, Nura Khalil, has been a formidable politician in the history of the state.

He left politics in 2004 and embraced business which has reduced his relevance in the face of the electorates. Khalil returned in 2022 to pick the gubernatorial ticket of NNPP with a strong hope to win the number one seat in the state.

However most pundits doubt Khalil and his party’s capacity a serious to clinch the governorship seat; the reason being that his party, also, does not have formidable patterns that will give him the mandate.

In addition to this, there is speculation that the party only relies on sponsoring jingles on the radio without orchestrating campaigns in the 34 local government areas of the state. This also explains why critics argue that the NNPP candidate is not different from the other minor political parties that entered the contest to only announce their relevance in the political spectrum.

But be as it may, anxiety and apprehension continues to pervade the political space in Katsina. How parties and their candidates handle the internal squabbles within their ranks and rally party members ahead of the polls would be critical.

Why It May Be Hard To Fix Nigeria – Adewole