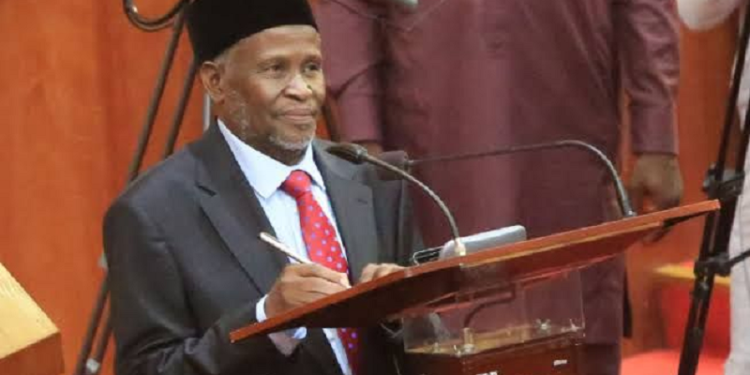 A day after the resignation on health ground of the chief justice of Nigeria (CJN), Justice Tanko Muhammad, the Senate has directed its Committee on Judiciary, Human Rights and Legal Matters, to go ahead with the probe of the complaints of the justices of the Supreme Court.

It also mandated the committee to interface with the three arms of government, the Bar and the Bench to collate their views and positions on the short to long-term measures needed to address the crisis facing the country’s judiciary.

The Red Chamber said such measures must include the immediate fiscal intervention as well as long- term and sustainable budgetary allocations required for the optimal performance of the judiciary in line with global best practices.

These were among the resolutions reached by the Senate following a motion brought to the floor by Senator Opeyemi Bamidele (APC, Ekiti Central) despite the resignation of the Justice Muhammad.

The motion came under Orders 41 and 51 of the Senate Standing Orders 2022, as amended where Bamidele recalled that last week Senate President Ahmad Lawan, drew the attention of the chamber to media reports on the state of affairs in the apex court.

He said the poor welfare of Judicial Officers would adversely affect the output of Judiciary in service delivery.

Bamidele said, “The judiciary, which is the epicenter of the temple of justice, should be preserved by the Senate through appropriate legislative measures in order to safeguard this highly revered institution and prevent it from being ridiculed.”

He stated that the committee, in taking steps to look into the matter as directed by the Senate president, has started the process of making arrangement to interface with relevant stakeholders both at the Bar and on the Bench.

Opeyemi said the resignation of Muhammad on Monday would not prevent the committee from going ahead with its assignment in the quest to find a probable lasting solution to the matter.”

He said, “Even though Hon. Justice Tanko Muhammad has stepped down as CJN, most of the Issues raised by the Justices of the Supreme Court and other stakeholders within the Judiciary, still remain and need to be addressed urgently to prevent an eventual shut down of the Judiciary.”

Supporting the motion, the deputy chief whip, Senator Sabi Abdullahi, said “this motion will show clearly that the Senate is not unaware of the role it is supposed to play.

“Of course, in playing that role, we also respect separation of powers. Our concern is that the judiciary as an arm of government deserves all the support it needs been the last hope as far as the rule of law is concerned.”

Similarly, Deputy Senate President, Ovie Omo-Agege, said, “I am very embarrassed as a lawyer and also someone from the judicial family. Seeing that petition on social media and eventually on the mainstream media, I was taken aback because it has never happened, it’s unprecedented.”

He said a recognition ought to be made that the judicial arm is an independent arm of government.

“There is no reason why the judiciary should lack anything financially,” Omo-Agege insisted.

In his remarks, Lawan said, “I can see most of the emphasis is on funding. When we look into the issues, they go beyond funding.

“We should look at other areas, whether there is need to improve on the structures or having issues that may not be about funding but funding is, of course, is a major issue,” Lawan said.

Fourteen justices of the Supreme Court had levelled allegations of corruption against Muhammad.

The justices, in a memo, protested the non-payment of their legitimate entitlements by the former CJN among others.