by Anayo Onukwugha
in Feature
0 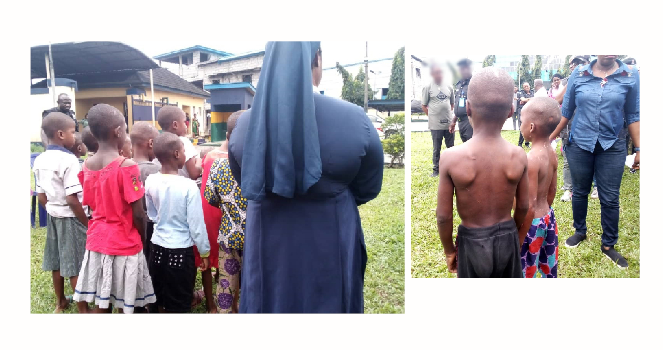 While it is difficult to say exactly how many orphans and orphanages there are in Nigeria, operators of orphanage homes in Nigeria have been accused of various acts, inimical to the dictates of their practices which includes failure to comply with the provisions of the Child Rights Act as domesticated by law in states.

With a good number of them said to be operating illegal, those licensed are either involved in selling (not given out on adoption) the children under their care. A few others are accused of subjecting the children on diverse hard labour and trafficking.

In Nigeria for instance, there has been a rise in paper orphans–children removed or kidnapped from their guardians with the use of coercion, force, and deception. Some of these paper orphans are recruited from baby factories involving the use of teenage and adult women to produce children.

These illegal orphanages are operated by individuals or groups that sell these children at a very high price. The children are then used for anything, ranging from house maids to rituals. Paper and genuine orphans alike can be used for Orphanage Tourism which involves groups of people like philanthropist and religious groups visiting and donating money.  LEADERSHIP Weekend writes that often, the main purpose of these orphanages’ is not to provide the children they are trafficking and using with support, but to use them for their own personal gain and profit. A revelation, that has forced many observers to call for their prosecution and seizure of properties acquired by such operators

The home, operated by Reverend Sister Maureen Wechinwu, a former member of a Catholic congregation, ‘Our Lady of Victory Ministries’ also known as ‘Victory Noll Sisters.’ The congregation, which has its headquarters in the United States of America, was founded in 1922 by a Catholic priest, Fr. John J. Sigstein.

At the end of the raid, a total of 15 children, aged between five and 15, were rescued, while the proprietor, Wechinwu was arrested by the operatives.

Parading the illegal operator at the Police headquarters in Port Harcourt on September 5, 2022, the Commissioner of Police, Eboka Friday, accused her of abduction and child-trafficking.

Eboka also accused the ex -Catholic Nun of changing the surnames of some of the children, especially those below nine years to her own surname, Wechinwu.

The commissioner of Police stated that some of the children confirmed that they were abducted from different parts of the country and brought to the orphanage home.

Eboka said: “Investigation revealed the following facts: Prosper Godwin ‘m’: He was abducted at Ikpazasia market in Bayelsa State on 31/10/2020, together with two others whom he does not know their whereabouts and was taken to the suspects.

“Later, he was sold to a woman at Lagos and subsequently returned back to the suspect. The parents Mr. and Mrs. Godwin Ododor have been contacted and they corroborated the statement of the child.

“Queen Harry ‘f’: She was abducted at Ojukwu Field, Mile 1, Diobu, Port Harcourt at about 1900hrs, while on an errand with the elder sister. The mother, Mrs. Florence have been contacted and she corroborated the facts.

“Miracle John Ohiri ‘f’: She was abducted on 19/11/2021 at Ada-George Road, Port Harcourt, opposite Holy Rock Church, along with her mother and two siblings, who have not been seen till date.  The father, John Ohiri has been contacted for identification of the child, who corroborated her statement that he reported the incident at Rumuokpakani Police Station.

“Favour Edeze ‘F’: She was abducted at Creek Road Market Port Harcourt 29/04/2022 at about 1000hrs, while on errand. The father one Emeka Edeze has been contacted and identified his child and also confirmed the incident.

“Chiemele Obinna ‘F’: She was abducted on 24/04/2022 at Rumuodara/culvet Oroigwe, Port Harcourt, while seated in front of their house with her sister. The mother, Glory Obinna was contacted, and she stated that the incident was reported at Okporo Police Station.

“We are yet to locate the parents of the remaining 10 children for identification. Investigation in ongoing with the view of arresting other suspects linked in the case.”

Responding to questions from newsmen, the Wechinwu insisted that her orphanage home is genuine, pointing out that it was registered with the Corporate Affairs Commission (CAC).

She explained that five of the children were recovered from mad people and others were brought to her by one Victor whom she did not know where he brought the children from.

The former Catholic nun, however, confessed to buying some of the 15 children in her custody, who were bought at prices ranging from N50,000 to N100,000.

She said: “Some of the children are mad people’s children. The others are brought to me by one Mr. Victor. Sometimes he comes with them in twos. One Miss Alice brought two to me. Alice said since I am a beginner that I should take them.

The arrest of Wechinwu and the rescue of the 15 children seems to be the highest breakthrough of the Rivers State Police Command in the year 2022, even though two child trafficking syndicates were bursted earlier in the year.

In February this year, operatives of the state police command, arrested three women, Favour Ajuzoe, Chioma Chibuike and Comfort Abatuo for the trafficking of two children at Rumumasi community in Obio/Akpor local government area of the state.

Parading the traffickers at the police headquarters, the commissioner of police said the rescued of the children and arrested the three suspects were made possible after they reported to Elekahia and Octopus police division.

Ajuzoe and Chibuike confessed to stealing and selling the children with the sum of N500,000 to the third suspect, Abatuo in September 2020.

Also, in July this year, operatives of the Rivers State Police command, arrested three persons, two females and a male, Edith Ejike, Nkiruka Samuel and Prince Ugun over the trafficking of a five-year-old child, Favor Emmanuel.

The trio confessed to stealing the child at Omagwa community in Ikwerre local government area of Rivers State, and selling same at the sum of N600,000:00.

Angry members of the community pleaded that the Catholic Nun and many other operators of baby factories be handed over to them for punishment.

It is a fact that a visit to an orphanage is a life-changing experience.  This is often because, even when children are provided decent conditions, the way they look at you and their desperation to receive a hug are impossible to forget.

It is often said that about eight million children live in orphanages across the world, but no doubt, 90 per cent of them have at least one parent. Shocking, right? Poverty is one of the main reasons that lead to such situations, combined with the fact that many of these children are disabled, which makes them even less desirable to their families.

While in orphanages in civilised countries, children are provided good food, clean clothes, a decent education, but in poor countries things are not quite the same as they are often 60 per cent of them subjected to sexual and physical abuse.

Many to a large extent starve or freeze to death, others lie in their own feces for hours or even days, as a few others are either tied to their beds, and never get to experience human affection and a real childhood.

As if things weren’t bad enough already, selfish individuals have now decided to take advantage of the generosity often extended to them and started what is now called “orphanage tourism”.

Majority of them do so for the sole purpose of attracting donations, exploitation and in most cases forcing children under their care to work despite not being properly fed.

With this new shocking revelation, a clarion call is therefore being made for relevant authorities to be up in their game to checkmate the activities of orphanage homes across the country. It is unbelievable that those in whom many people reposed their confidence and trust and who are seen as helping humanity by taking care of abandoned and abused children could be discovered to be engaging in such clandestine activities against the same humanity they pretend to help.