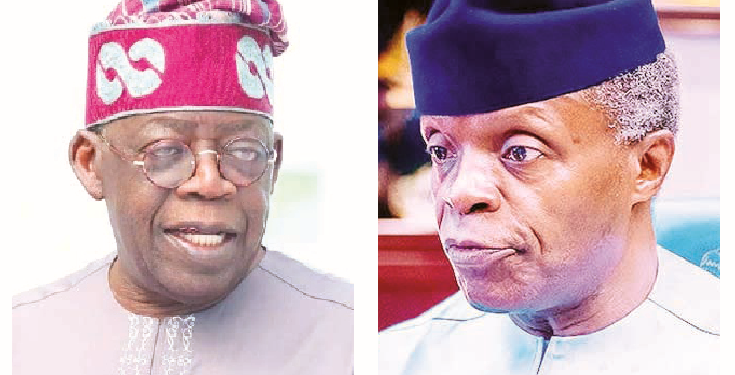 President Muhammadu Buhari and northern governors on the platform of the All Progressives Congress (APC) yesterday narrowed the search for the party’s presidential flag bearer in the forthcoming 2023 presidential poll to the southern part of the country.

LEADERSHIP Sunday also gathered that at a meeting with all the presidential aspirants of the APC, Buhari told party stakeholders that the Action Congress of Nigeria (ACN) bloc of the party should be allowed to produce his successor.

It was also gathered that northern aspirants in the party will withdraw from the race before tomorrow.

This followed the directive by the president and northern APC governors that northern presidential aspirants should resign.

In a statement issued yesterday, 10 APC governors from the North and Senator Aliyi Wamakko had asked the president to pick a southern presidential candidate as his successor.

Accordingly, one of the northern aspirants and Jigawa State governor, Abubakar Badaru, on Saturday night declared that he has withdrawn from the race.

With the decision of the president and northern governors of the APC, presidential aspirants who were members of the defunct ACN, Vice President Yemi Osinbajo; APC national leader, Ahmed Bola Tinubu; Ekiti State governor, Kayode Fayemi, and former Ogun State governor, Senator Ibikunle Amosun, are clearly the front-runners in the contest for the presidential ticket of the governing party.

At the time of filing this report, seven southern governors of the APC were still meeting with presidential aspirants from the South at the residence of former Osun State governor, Segun Osoba, in line with President Buhari’s directive that the governors should go in search of a formidable candidate.

In 2013, the new Peoples Democratic Party (n-PDP), which broke off from the PDP; All Nigerian Peoples Party (ANPP); a faction of the All Progressives Grand Alliance (APGA); the ACN and CPC, formed a granite coalition of legacy parties that transmuted into the APC.

The CPC bloc clinched the presidency leading to President Buhari’s victory in 2015, and the ACN got the vice president, with Osinbajo as Buhar’s running mate, while the n-PDP got Senate presidency in the person of Bukola Saraki.

A dependable source told LEADERSHIP Sunday last night that apart from settling for a southern presidential candidate, President Buhari also told APC governors and other party bigwigs at the meeting with presidential aspirants to shop for a presidential flag bearer from the ACN bloc.

He asked the governors to hold consultations and come up with a formidable candidate before the party holds its primary election between tomorrow and Wednesday.

The programme of events for the APC presidential primary, which was sighted by our correspondent yesterday, showed that the party’s special convention is billed to commence on Tuesday by 10am and end at 11pm the same day.

A statement by presidential spokesman, Femi Adesina, last night noted that Buhari’s meeting with the presidential aspirants was a continuation of the on-going consultative process aimed at ensuring a smooth and strategic emergence of a standard bearer, who will lead the APC to a resounding victory in the upcoming presidential polls.

“Looking at this assemblage of personalities and considering your rich pedigree of accomplishments in life, I have come to the conclusion that our party, the APC, is rich in human resources and also that our nation is blessed with capable people that can successfully steer the ship of state into the future,” Adesina quoted the president as saying.

He noted that with his first-hand knowledge of the demands of the office of the President of the Federal Republic of Nigeria and the expectations of the citizens, “I must salute your courage and your selfless spirit, in volunteering to serve in the highest office of the land.”

The president added: “Our party, the APC, has won two successive presidential elections in 2015, first when we were in the opposition and in 2019 when I sought re-election. Both processes were achieved through unity of purpose, strategic alignment, consultation, fairness, determination and effective leadership.  In both instances, national and party interests were overriding factors in our deliberations and decision-making.

“The 2023 General Elections are fast approaching in a global, regional and national environment that is constantly changing and challenging. This demands that our party should become more aware of the changing environment, be responsive to the yearnings of our citizens, re-evaluate our strategy and strengthen our internal mechanism so that we would sustain the electoral successes.

“I am pleased to note that the party, recognizing the significance of all these demands, has over time developed several democratically acceptable processes and policies that promote consultation, internal cohesion and leadership to facilitate victories at the polls.”

The president recalled the consultation he had held with stakeholders “that would help the electoral fortunes of our party, beginning with the State Governors. This is the second in the series and I still look forward to meeting with party stakeholders. These steps are being taken to ensure that the unity and cohesion of the party are sustained and to provide direction.

“Amongst other things, I reminded the APC Governors of the need for the party to proceed to the 2023 Presidential elections with strength, unity of purpose and to present a flag bearer who will give Nigerians a sense of hope and confidence, while ensuring victory for our party. I extend a similar reminder to all of you distinguished aspirants.”

Noting that the APC will on Monday June 6, 2022 commence its national convention during which one candidate will be picked by delegates to fly the flag of the party for the 2023 Presidential Election, President Buhari said he was aware that there was anxiety among party members about the outcome of the process.

He continued: “Given these circumstances, I charge you to recognize the importance of the stability and unity of the party, which cannot be overemphasized.

“Similarly, I wish to remind you that our choice of flag bearer must be formidable, appealing to the electorate across the board and should command such ability to unify the country and capacity to address our critical challenges.

“Ahead of the Convention, the party machinery has screened and found all aspirants eminently qualified. Recognizing this fact, the Screening Committee has, amongst others, recommended that consensus building through consultation, be intensified.

“Without prejudice to your qualifications, I urge all of you to hold consultations amongst yourselves and with the party, with a view to building a consensus in a manner that would help the party reduce the number of aspirants, bring up a formidable candidate and scale down the anxiety of party members.”

Earlier, national chairman of the party, Senator Abdullahi Adamu had promised that all stakeholders of the party would be reached in the consultation process.

RELATED: Tinubu’s Apology Not Enough, APC May Punish Him Over Utterances About Buhari – Adamu

Responding on behalf of the aspirants, Vice President Yemi Osinbajo; former governor of old Abia State and immediate past minister of Science, Technology and Innovation, Dr Ogbonnaya Onu, and Governor Abubakar Badaru of Jigawa State, thanked the President for his leadership and guidance, pledging that they would hold the consultations as counseled “for the unity and strength of our party, the APC.”

Earlier, the APC governors from the North have asked President Buhari to pick a southern presidential candidate as his successor.

The 10 governors and Senator who signed the statement asked the northern presidential hopefuls to withdraw from the race in national interest.

The statement reads in part: “APC governors and political leaders from the northern states of Nigeria today met to review the political situation and to further support our Party in providing progressive leadership amidst our national challenges.

“During our discussions, we welcomed President Muhammadu Buhari’s invitation to governors and other stakeholders to contribute to the emergence of a strong presidential candidate for the APC.

“After careful deliberation, we wish to state our firm conviction that after eight years in office of President Muhammadu Buhari, the presidential candidate of the APC for the 2023 elections should be one of our teeming members from the southern states of Nigeria.

“It is a question of honour for the APC, an obligation that is not in any way affected by the decisions taken by another political party. We affirm that upholding this principle is in the interest of building a stronger, more united and more progressive country.

“We therefore wish to strongly recommend to President Muhammadu Buhari that the search for a successor as the APC’s presidential candidate be limited to our compatriots from the southern states.

“We are delighted by the decision of our esteemed colleague, His Excellency, Governor Abubakar Badaru to  contribute to this patriotic quest by withdrawing his presidential aspiration.”

Reacting to the development, APC governors from the South called on northern presidential aspirants, Senate President Ahmed Lawan and Governor Yahaya Bello of Kogi State to quit the presidential race.

Akeredolu stated: “We received with utmost joy the news of the resolution of the 11 Governors from the Northern Region. We did not expect anything short of this heart-warming decision from our colleagues, great patriots and reliable partners in the collaborative efforts geared towards the attainment of nationhood for our dear country. This is indeed another landmark achievement in our quest for understanding, rapprochement and continual engagements for mutual beneficence.

“We acknowledge this courageous stance for equity and moral rectitude. We applaud the zeal and determination of our brothers to engage realistically and honestly. We salute this uncommon resolve to confront issues militating against the march towards nationhood and ultimate greatness.

“By this gesture, we are convinced of the seriousness of our colleagues to join other patriots in ensuring that the ascendant march towards stability, progress and prosperity is not truncated by indiscretion.

“We congratulate our brother, Governor Abubakar Badaru, for his exemplary conduct. Posterity will remember him for good. We thank the leadership of the Northern Governors’ Forum for the patriotic zest displayed at this crucial moment. We look forward to conducting a hitch free Convention which will culminate in the election of a suitable candidate who will hoist the flag of the party with a sense of mission.”