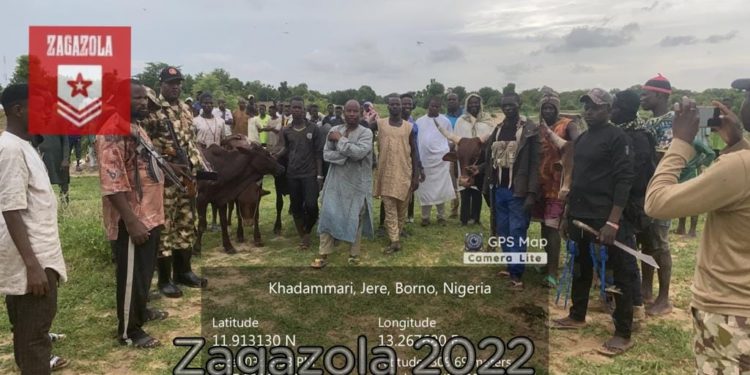 The Troops of 195  Battalion of the Nigerian Army, Operations Hadin Kai, have rescued seven herdsmen kidnapped by Boko Haram terrorists in Dusuman in Maiduguri, the Borno State capital.

An intelligence report obtained by Zagazola Makama, a Counter Insurgency Expert and Security Analyst in Lake Chad, from top military sources and made available to LEADERSHIP, showed that the terrorists, numbering about 30 with Ak 47  riflles on motorcycles, also rustled about 200 cows from the victims.

The sources said that the troops of 195 Battalion in conjunction with Civilian Joint Task Force (CJTF) immediately pursued the Boko Haram insurgents and caught up with them at Jintolori forest.

He said a gunbattle ensued but due to the superior fire power of the troops, the insurgents abandoned the victims and the rustled cows and fled through the thick forest.

“No casualty was recorded on both sides. The victims and rustled cows are already re-united with their community,” the source said.

According to him, the troops will continue to protect farmers and herders especially during farming season.