by Salifu Usman
in News, Sports
0 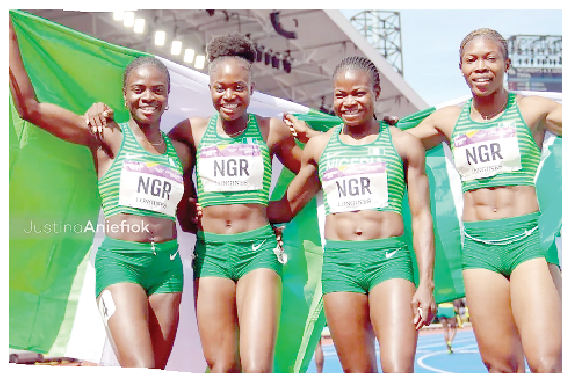 World and Commonwealth Games 100m hurdles champion and record holder, Amusan, started the historic run with a brilliant first leg before handing over to Favour Ofili who ensured Nigeria maintained the advantage before giving the baton to Chukwuma, the individual 100m finalist.

However, the situation wasn’t the same for the men’s team who settled for bronze in the same event category. Gold and silver places went to England and Trinidad & Tobago.

The quartet of Udodi Onwuzurike, Favour Ashe, Alaba Akintola and Raymond Ekevwo also made history with the bronze medal win.

Meanwhile, Tobiloba Ayomide Amusan has made history as the first Nigeria track and field athlete and the second in history to successfully defend a Commonwealth Games 100m hurdles title.

The petite 25-year-old Nigerian also set a new 12.30 seconds Games record on the way to winning the event’s gold.

Amusan, the reigning World champion and world record holder in the event, also became the first Nigerian track and field athlete to win a gold medal at two editions of the Games.

In the women’s long jump event, Ese Brume leaped a distance of 6.99m to win gold medal. She had a no jump on her first attempt but bounced back right away to jump 6.99m to take the lead in the final and set a new Games record.

However, on her very last attempt, Brume jumped seven meters for another Games Record to become the first woman to jump that far in the history of the Commonwealth Games.

She attended Our Lady of Apostles Secondary School, Ijebu Ode.

She recently won the 2022 World Athletics Championships 100 metres hurdles gold medal, setting a new world record of 12.12 seconds in the semifinal, followed up by a wind-assisted 12.06 seconds.

She also won Diamond League Trophy in Zurich in 2021 in the 100m hurdles, becoming the first Nigerian to do so, and also breaking the then African record held by Nigeria’s Glory Alozie in the process.

She holds the national record and the national Under-20 record over the 200m with a time of 21.96 seconds, thus making her the first Nigerian female athlete to run under the 22 seconds barrier.

She held the NCAA collegiate record with her time of 21.96s in the 200m until Abby Steiner broke the record at NCAA Championships with a time of 21.80s.

She gained her first international experience at the 2018 Commonwealth Games in Gold Coast, Australia where she won a bronze medal behind the teams from England and Jamaica with the Nigerian 4 × 100 m relay team in 42.75 seconds.

Then she took part in the African Games for the first time in Rabat and reached the final of the 200m, where she did not start. She also won gold with the Nigerian relay team in 44.16 seconds.

Born April 7, 2001, Nwokocha is a multiple national champion over 100 metres.

In 2021, she posted a new personal best time in the 100m of 11.09 seconds and, in the process, became the first Nigerian athlete to qualify for the delayed 2020 Tokyo Olympics. She also won the 100m at the National Sports Festival in Benin.

At the Athletics at the 2020 Summer Olympics Women’s 100 metres, she ran a new personal best time of 11.00 seconds in her heat to qualify for the semi-finals.

As the curtain draws on the 22nd Commonwealth Games, Birmingham 2022, President Muhammadu Buhari celebrates the athletes that represented Nigeria gloriously in the competition.

The president in a statement by his media aide, Femi Adesina joined millions of other sports loving Nigerians to watch some of the colourful and spectacular moments in the 11-day competition, which had no fewer than 5,000 athletes representing 72 nations and territories, competing in 280 medal events.

Saluting the memorable display of Team Nigeria athletes, the President commended the 94 worthy ambassadors that proudly flew the Nigerian flag in nine sporting events, and for those exciting moments when the medalists brought smiles to our faces by breaking world, national and games records, as well as achieving personal bests in their career.

With 35 medals, including 12 gold, 9 silver and 14 bronze harvested already on the late evening of the 10th day of the Games, and more medals likely for the country on the last day, the President thanks the shining stars of Nigeria for competing among the best in the world and displaying the God-given attributes of the real Nigerian- never give up, strive to the end.

According to the President, it is noteworthy that majority of the medals so far, including 12 gold for the country, were championed by our talented young women and girls, including multi medalist Tobi Amusan (100m Women’s Hurdle and 4x100m Relay), Favour Ofili, Rosemary Chukwuma, Grace Nwokocha (4x100m Relay); Miesinnei Mercy Genesis (50 kg), Blessing Oborududu (57 kg) and Odunayo Adekuoroye (57kg) in Women’s Freestyle wrestling; as well as Adijat Adenike Olarinoye (55kg) and Rafiatu Folashade Lawal (59kg) in Women’s weightlifting.

Team Nigeria’s Success indicate Our Sports Is On The Rise Again, says minister

He described Team Nigeria’s success in Birmingham as an indication that Nigerian sports is on the rise again in spite of the global economic downturn.

Nigeria won a total of 35 medals made up of a record 12 gold, 9 silver and 14 bronze medals to rank seventh on the medal table.

Team Nigeria is also the first ranked African nation at the Games, also a record.

Many new records were set as old Commonwealth records were broken by Nigerian athletes. Jinxes of over 4 decades of no medals in some sports were also broken.

“The performance of Team Nigeria is excellent, phenomenal and commanding. A signpost of better performances in the future. Congratulations to Team Nigeria athletes and officials on their history-making feat at the 2022 Commonwealth Games. The athletes have, once again demonstrated the true Nigerian spirit”, said the Minister in his congratulatory message.

“Our success in Birmingham is an indication that Nigerian sports is on the rise again inspite of the global economic downturn. Our youth have shown the resilience Nigerians are known for and we, as a Sports Ministry, will ensure we continue with the reforms we started in 2019 and which have resulted in the geometrical growth of the sector” the Honourable Minister concluded.