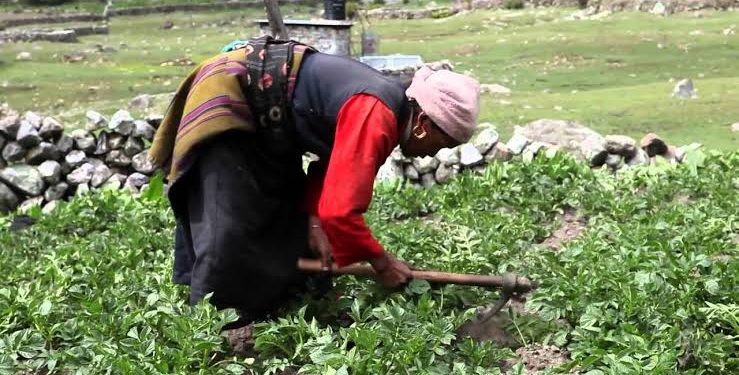 Nigerian farmers are already used to struggling on their own to make ends meet with little or no government attention. It beats the imagination of many that the very rich and potentially vibrant and lucrative   agricultural sector has painfully remained unattended to by governments at all levels. Only few states of the federation take agriculture seriously. Only few states in the country can boast of doing little for their farmers. With high cost of items in the country, governments are expected to subsidize basic agricultural items like  e.g. seedlings, fertilizers, other farm implements like tractors, etc. to assist them in  reducing manual labour even when they have failed to provide them with soft loans to expand investments from small scale to reasonably mechanized systems that can provide food for families and at the same time, generate some income for them.

Year in year out, these governments deceive their people with verbally elaborate plans for diversifying the economy from other areas to agriculture. Not even the federal government with a huge strength has done that. Not even the states with maximum capacity have done that. It is not that those in government don’t know the value of agriculture to the society, but it appears it’s a deliberate ploy to keep the people in perpetual poverty. Many of those in strategic positions in government have their personal farms and yet, cannot encourage people to do same for the same benefits that attracted them. The story of the Nigerian farmer is that of pity, neglect, pain, agony, suffering, exploitation ,etc.

The new farming season is midway now but fertilizers are yet to to be made available. Where the items are available, the high cost of the price is beyond purchase by these same farmers. Where they need tractors to till large expanse of land and high breed seedlings for higher yield, none is available. The oil sector is not an area that everyone can venture into neither are other areas such as mining, production, commerce, aviation ,transportation ,etc. agriculture is the only sector with numerous natural endowments such as land is not as capital intensive as other such areas. Therefore, the refusal or inability or lack of concern for the agriculture sector by government, is not only disdainful, wicked but callous and inhuman. There is nobody that doesn’t eat food. Therefore food is a daily basic consumable that is needed for daily survival of people and animals.

This is a critical sector that has helped many people because of its vast potentials and endless opportunities. This is a sector that has provided huge consolation for many people especially now that most governments at all levels across the developing world have not done well. It is a sector of self motivation ,discipline, sustainability and advancement. It is a sector that only those who know its value and are committed to pursuing it carry on even with no or less governmental intervention. Those who are serious farmers know what am talking about. My definition of serious farmers is not in the bigness of the size of your farm, but how committed to even the small farm that you have to ensure the food security of your immediate family ,clan or community.

Most committed farmers are already aware of the need for early planning to avoid any eventuality or unanticipated occurrence or consequences such as scarcity and late arrival  of inputs like fertilizer, herbicides ,seedlings and also being conscious of increased prices ,etc which can make business very frustrating. While many farmers would naturally rely on government for the provision, supply or subsidy of these vital and basic inputs, others would prefer to work it out for themselves considering the several failures or refusal of governments to do it. This is because most people in government don’t give priority to agriculture even when they boast of having their own farms and being farmers themselves. It is worrisome that people who have farms before getting into government lack the zeal, passion and commitment to continue with it and even make it a priority in office. Am always tempted to ask whether their ownership of farmlands is for decoration or the pride of ownership of landed property which is being kept for sale anytime the need for cash arises.

The fact remains that agriculture is the mainstay of every human economy especially in struggling nations , but almost all the three tiers of government have not taken to that seriously here in Nigeria , neither have they demonstrated any exemplary and serious commitment to it. But many individuals know  the value and eternal relevance of the sector, hence their personal commitments and investments. The food security it provides, employment it generates and corporate trickledown effects it provides for industries ,companies ,factories, etc. Those in government actually don’t know that the cost of governance can seriously be cheaper if government goes into agriculture because it is in itself, one of the huge consumers of food items through the bogus public breakfasts, lunch, dinners and many other ceremonies they organize where food is supplied by contractors in large quantities.

It is therefore my plea to governments at all levels to help farmers do agriculture for good benefits even if they themselves don’t take it as one of their first line priorities. This is because the burden of governance will be less on government when people are assisted by government to help themselves. They can do that by directing their respective ministries of agriculture and relevant agencies to start official preparations right away before the commencement of rains. There are many people that do dry season farming through irrigation and they benefit a lot. For this category, farming is already ongoing and the many food crops and beautiful vegetables we see and buy on the roads are the products of their dry season farming. But because of the more expensive and capital nature of the dry season farming, many who could not afford to do irrigation have to wait for the rains before planting their crops. Majority  of farmers fall under this category due to the fact that they cannot put in place basic structures of irrigation and  security ,etc for themselves. Dry season farming entails closer monitoring  and security due to the fact that most animals roam on their own with little or no supervision across the farmlands because harvests have been done on most farms. Government can also help those interested in dry season farming or those whose locations have advantages of producing all season crops for the purpose of providing food security and enhancing their socio-economic status.

Agriculture is not an on- the shelve activity like going to the shop to pick any ready made item. It is an outcome of a long term strategic planning that involves a lot of factors.

The various ministries of agriculture at all levels should also move quickly to draw the attention of their principals to start early preparations to assist our suffering farmers. These patriotic farmers sometimes go through hell to get what they need or want and sometimes incur a lot of losses as a result of government policies or untimely and wrong political decisions or inactions.

As a practical farmer who is passionate about agriculture, I feel it is timely to raise this concern and alarm to draw attention of those in political authority to help our farmers and to also alert the farmers themselves of the need for early planning. If you have some money now,   be conscious to buy fertilizer and other inputs to keep, because you may not have the money at the time you need to buy them or that it may be scarce or the prize may double.

Wishing all of us the committed farmers of Nigeria, a blessed season of high productivity with bountiful harvest.