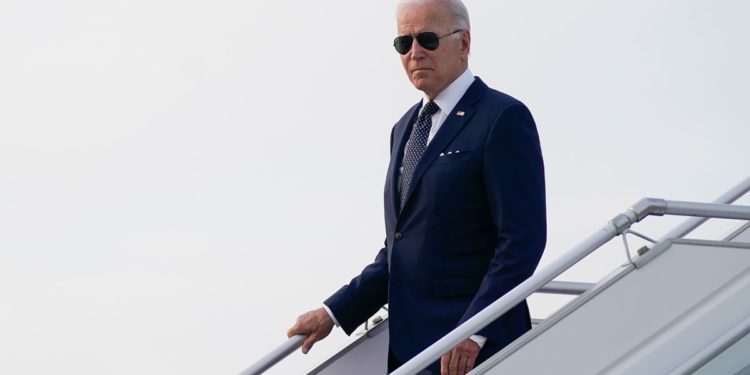 President Biden had a temperature of 99.4 degrees late Thursday evening after testing positive for the coronavirus earlier in the day, according to the White House physician, who said on Friday that the president’s symptoms had improved after his first full day of taking the antiviral drug Paxlovid.

The physician, Dr. Kevin O’Connor, wrote in a letter released on Friday that Mr. Biden was still experiencing a runny nose and fatigue, and that he had an “occasional nonproductive, now ‘loose’ cough.” Dr. O’Connor added that Mr. Biden’s temperature had “responded favorably” to Tylenol.

“His voice is deeper this morning,” Dr. O’Connor wrote. “His pulse, blood pressure, respiratory rate, and oxygen saturation remain entirely normal, on room air.”
Andrew Bates, a White House spokesman, said Mr. Biden’s temperature of 99.4 on Thursday was not considered a low-grade fever by the White House because it fell “within the normal range.” He referred to guidance from the Centers for Disease Control and Prevention that states a person is considered to have a fever “when he or she has a measured temperature of 100.4 degrees” or feels warm to touch.

But in his letter, Dr. O’Connor indicated that he did not feel that the president’s temperature of 99.4 was normal until after it responded to Tylenol.
“He did mount a temperature yesterday evening to 99.4°F, which responded favorably to acetaminophen (Tylenol),” Dr. O’Connor wrote. “His temperature has remained normal since then.”
Mr. Bates said that Dr. O’Connor did not prescribe the Tylenol for the temperature, but rather for Mr. Biden’s “discomfort.” But Mr. Bates declined to say what discomfort the president was experiencing. Officials have said he does not have a sore throat and have not indicated he has other aches and pains.
The president will continue taking his course of Paxlovid, Dr. O’Connor added, as well as Tylenol. He will use his albuterol inhaler “as needed.”
While he is on Paxlovid, Mr. Biden will not take two regular medications — a blood thinner and a pill to reduce cholesterol — Dr. O’Connor wrote, adding that “it is reasonable to add low dose aspirin as an alternative type of blood thinner.”
Dr. Ashish Jha, the coordinator for the administration’s COVID-19 response, said Thursday at a White House briefing that pausing the two medications while Mr. Biden was on the antiviral treatment was “a very standard, common thing that we do when we give people Paxlovid.”
The letter came after Dr. Jha said Friday morning that Mr. Biden had been feeling “just fine” late Thursday night, with a dry cough and a runny nose as his only symptoms.

Dr. Jha said on NBC’s “Today” show that members of Mr. Biden’s staff had talked with the president around 10 p.m. Thursday night.

“His words were, ‘I’m feeling just fine,’” Dr. Jha said. “No change in symptoms. Again, the sort of dry cough, the runny nose, those are his two main things that he was feeling yesterday.”

The White House has in the past taken extraordinary measures to protect the president, though in recent months, Mr. Biden has resumed a more normal presidential schedule.

Dr. Jha said that the president was being closely monitored for any signs that his symptoms might be getting worse, including the possibility of any effect on his lungs, which can be one of the more dangerous complications of a coronavirus infection because COVID-19 is primarily a respiratory disease.

So far, Dr. Jha said, there were no such signs.

“His personal physician is also consulting with infectious disease experts around the country, all part of the plan of what we were always planning on doing if the president got infected,” Dr. Jha said. “And so he gets very regular check-ins and, of course, he’s meeting with people all day, by phone and by Zoom and so there’s lots of eyes on him.”

Dr. Jha also downplayed the risks that the president could develop so-called “long COVID-19,” where symptoms persist for weeks, months or longer. He used a question about that possibility to tout the importance of vaccination.

“If you think about, you know, the proportion of people who end up having significant long-term symptoms, it’s very small and cut substantially if you’ve been vaccinated and boosted, which this president has,” he said.

Later on Friday, Dr. Jha was scheduled to appear at a White House briefing at 3:30 p.m. Eastern with the press secretary, Karine Jean-Pierre.

7 Incredible Health Benefits Of Strawberries And Why You Should Eat More... Click Here For Details
Tags: Biden
SendShareTweetShare
Previous Post