*It was a mere visit of governors to rub minds, says opposition party *Tinubu has settled for Muslim-Muslim ticket – Ganduje 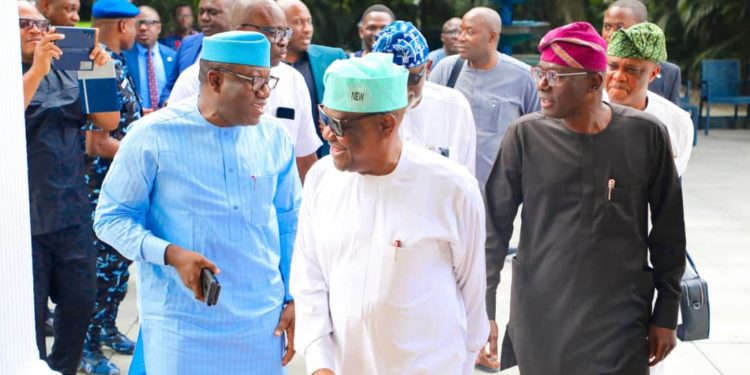 Governors of the All Progressives Congress (APC) yesterday stormed Port Harcourt, the Rivers State capital, in what is considered in the political circle as moves to convince the state governor, Nyesom Ezenwo Wike, to dump the Peoples Democratic Party (PDP).

LEADERSHIP Weekend gathered that the APC governors went into a closed door meeting with the Rivers State governor on arrival at his residence.

The visit of three All Progressives Congress (APC) Wike yesterday raised suspicion within the PDP about a possible defection of the governor who is aggrieved over his being passed over for the presidential running mate position of the party.

But the party national leadership dismissed concerns about the meeting, noting that it was a meeting of governors to rub minds over the worrisome state of affairs in the country.

The governors are outgoing

At the meeting was Wike’s ally and former governor of Ekiti State, Ayodele Fayose, who recently insisted that Southern Nigeria must produce the next president in 2023.

Wike and his supporters have been aggrieved over the emergence of Delta State governor, Ifeanyi Okowa, as the running mate to the party’s presidential candidate in the 2023 elections, Alhaji Atiku Abubakar.

Although the party had set up panels to appease the governor, there are indications that much success has not been made.

It was gathered that some of the demands made by the pro-Wike camp is for the national chairman, Dr Iyorchia Ayu to resign his position, a call which has been rebuffed by opposing camps.

Incidentally, the visit of the APC governors to Wike comes barely after Ayu returned to the country from his two-week vacation in the United Kingdom.

The visit by the APC governors also came amid rumours that Wike met with APC presidential candidate, Bola Ahmed Tinubu, in France, a claim which was however debunked by a PDP Board of Trustees (BoT) member, Adamu Maina Waziri, and later Tinubu’s campaign team.

Although he also met with a delegation of PDP National Assembly members, his key allies, including Benue State governor, Samuel Ortom and Fayose, had continued to express reservations over the way Wike was treated by the party.

A top party chieftain who spoke with LEADERSHIP weekend on condition of anonymity said the visit does not send a good signal for the party.

The party chieftain who described the visit as curious added that if Wike was trying to get the attention of the party leadership he has certainly done so.

While noting that he still hangs on to Wike’s declarations that he remains a PDP man, he added that the “party leadership would have to hasten up on the reconciliation process so that things don’t get any worse than they are now.”

Another party member who also asked not to be named, said, “We believe that the party still has a robust conflict resolution mechanism but it has to be hastened to ensure that Wike does not leave the party.

“We all know how much Wike has contributed to the success of the party over the past seven years. I know that the party has been doing so much to resolve the issue but I would appeal to the party leadership to ensure that it intensifies its effort”.

Reacting however, the national publicity secretary of PDP, Hon Debo Ologunagba said the party does not read political meaning into the visit.

Ologunagba, who spoke with LEADERSHIP Weekend, said, “People called them APC governors; I classify them as Nigerian governors. They have a club of governors and they have been interacting. I expect that this is one of such interactions among governors so we don’t make any issue out of this.

“And I believe that they should be discussing issues of state especially against the backdrop of insecurity and the need for every hand to be on deck for the sustenance of this democracy and peace and stability of Nigeria.

“So if governors visit another governor I do not see anything wrong with that. I think it is part of measures towards ensuring that all hands are on deck and that they are working in the interest of Nigeria.

“We can only practise politics today. I don’t think any person can do politics in Ukraine today because there is war there. When we have a situation where hardened criminals with multiple blood on their hands escape in very suspicious circumstances that should give any person concern, especially governors because they are chief security officers in their states.

“And that could inform reasons for this visit on how they can come together and encourage the president against the backdrop of PDP’s call for urgent convocation of the National Council of State meeting which comprises former heads of state and governors. It has become imperative for the governors to work together across party lines.

“I think that is the issue. So we cannot look at everything from the point of politics. Politics is good but we can only play politics where there is peace and stability. So as a party we believe that governors have a forum where they meet and share ideas and all hands must be on deck irrespective of party leaning to ensure that the country survives,” he said.

Also, prominent members of the Peoples Democratic Party (PDP) in Rivers State have said no amount of pressure will make Governor Wike to leave the PDP for any other party.

Speaking with our correspondent in Port Harcourt, a former member of the House of Representatives, Chief Ogbonna Nwuke, said the governor has no plans to leave the PDP for any other party, considering the large followership he has built across the country.

Nwuke said, “It just tells you who Governor Wike is. This is the first time he is playing national politics but you can see that Wike has entered the minds of a lot of Nigerians. They are taking him seriously. Even at the performance at the convention where the North rallied behind the scene to stop him, it wasn’t one that ended in disgrace.

“So, if you look at the outcome of the convention, you will know that Governor Wike controls a sizeable number of PDP members. A huge segment of the party is behind him.

He spoke during a gathering of about 100 clerics at the Kano state government house as part of activities to mark Eid El Kabir.

“We have advised him to pick a Muslim deputy and he has agreed,” Ganduje said, adding that “a Muslim-Muslim ticket is a reality. It is not something new in Nigeria.”

The Kano governor asked the clerics to pray for Tinubu to emerge as Nigeria’s president come 2023.

He also urged them to offer prayers for his administration’s peace and progress.

Ganduje further asked the clerics to pray for his deputy, Yusuf Gawuna, who emerged as the APC governorship candidate in Kano State for 2023 elections.