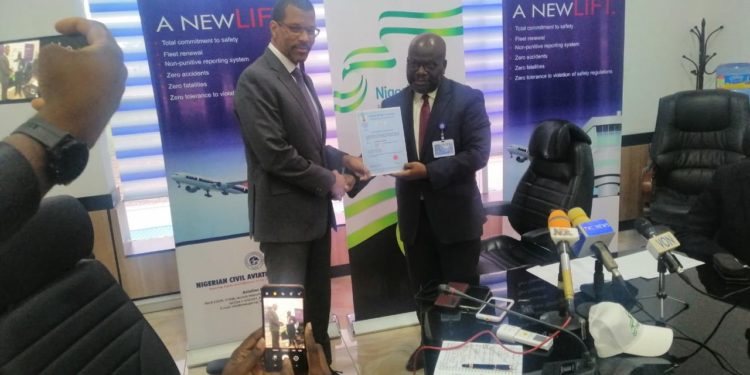 Nigeria Air is the nation’s proposed national carrier and it is to be a public-private partnership with the federal government maintaining 5% stake, while 49% would be held by strategic equity partners and 46% by Nigerian entrepreneurs.

The Ministry of Aviation took to its official Twitter handle, @fmaviationng on Monday, announcing the presentation of the ATL to the interim board of the new airline.

It wrote: “Presentation of Airline Transport Licence (ATL) to Interim Board of Nigeria Air. Nigeria Air is here and is going to provide quality service to Nigerians.”

A former managing director of the defunct Virgin Nigeria Airways, Capt. Dapo Olumide, has been appointed as the interim MD of the airline.

However, LEADERSHIP gathered that the AOC, which is currently under processing and has reached an advanced stage, may be given to the airline by next month.

The minister explained that the airline would start operations with three wet-leased aircraft, as it would take about three to five years to take delivery of an aircraft that was ordered for.

Sirika further emphasised that the Federal Government would not have any control in Nigeria Air, rather investors in the carrier would run the business.