by Tunde Oguntola
in Politics, News
0 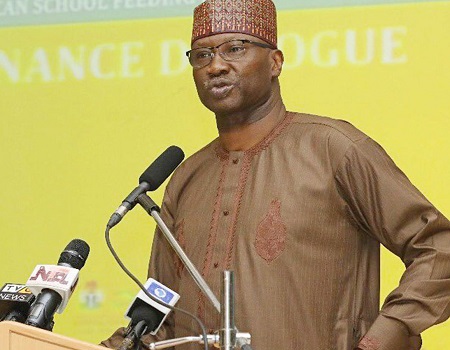 Secretary to the government of the federal (SGF), Boss Mustapha, has said the administration of President Muhammadu Buhari is the best in entrenching democracy in the country.

Mustapha said Buhari has not only sustained the country’s democracy but consolidated and improved the country’s electoral processes.
Speaking during an interview with newsmen at Eagle Square, the venue of the 2022 Democracy Day in Abuja yesterday, the SGF said he believes that by the time the nation gets to 24 years, it would have consolidated on the gains of democracy more.

He said, “You can see the amount of improvement that is being made in the electoral processes which is one of the fundamental things we need to do to deepen democracy and make the contest fair, transparent, and equitable to the people of Nigeria.”

Mustapha also said Nigerians have reasons to celebrate democracy day having recorded 23 years of unbroken democratic government in spite of the challenges it had gone through as a nation.

He said, “23 years of unbroken democracy in Africa, I think for a country like Nigeria that has had a lot of interruptions in the course of our political developments, I think it is a thing to rejoice over.”

Mustapha further assured that there is hope for this country.
“We are birthing a new Nigeria as we transit beyond 24 years of democracy,” he said.

He said that despite the challenges facing the country, the Nigerian government and its people have continued to strive, especially in its economic development.

The SGF urged Nigerians to continue to be hopeful and patriotic citizens as Nigeria moves towards 2023 and the elections.

He stressed that Nigerians are very resourceful, resonant, and determined people.

“We don’t see defeat, we overcome them. Nobody will want to ignore the fact that there are challenges, both with security and economy which is a global phenomenon, but this is not only restricted to Nigeria.

“When I hear about the cost of food products, it is a global phenomenon. The war between Ukraine and Russia has totally impacted the world.

“COVID-19 has its own adverse effects, which we are just trying to overcome, but I can tell you that Nigeria as a nation has sustained economic growth.

The SGF said the nation has been able to exit recession, while most developed countries are still in it.

According to him, “We have been able to exit recession and we have continued to in the last quarters sustain growth and even diversified the economy.

“Oil and gas is not the major index now in judging where our economy is going, but services.

“Services to the entertainment and other industries are providing for us to be able to sustain our economy and that is the best way to go so that with this, Small and Medium Enterprises (SMEs) will be able to create wealth and generate employment.”

He added that “government alone cannot provide for everybody, but have come to a point where we must resolve that the way to go is to provide an enabling environment so that the people can just work as hard as they have always worked.

“Nobody will ever refer to Nigerians as lazy people. All over the world, we are considered vibrant, very strong, and resourceful people,” Mustapha said.

The SGF said that the Buhari-led administration has also respected human rights and subjected itself to interrogations where necessary.

“I think we do the best that we can. In the process of having served in the last five years, if there is any government that is open and transparent about its engagements on the issue of human rights, it is this administration,” he added.

HOW MY CHINESE DOCTOR RECOMMEND THIS MAGIC DRUGS THAT HELP WOMEN PREVENT AND TREAT BREAST CANCER AND ALSO HELP MEN PREVENT AND CURE PROSTRATE ISSUE PERMANENTLY WITHOUT SIDE EFFECTS AND REMISSION!!INEVER BELIEVE IT!!
Tags: Buhari’s AdministrationSecretary to the government of the federal (SGF)
SendShareTweetShare
ADVERTISEMENT
Previous Post