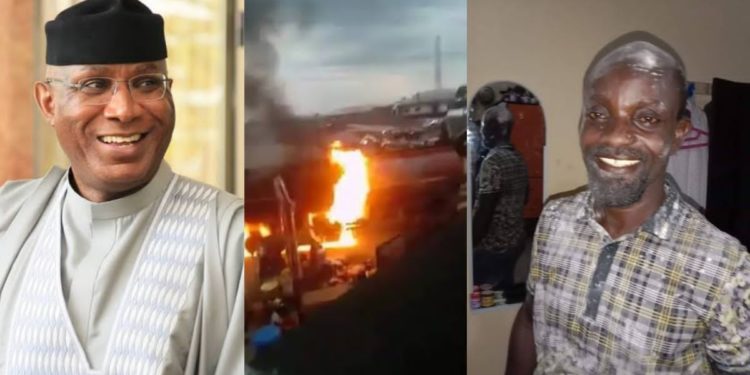 The heroic tanker driver had on June 10, 2022 driven a burning tanker loaded with petrol from a densely populated area in Agbarho, Delta State to the riverside, saving hundreds of lives and property worth billions of naira.

The act was captured by onlookers on video, which went gone viral.

Agbarho, a community in Ughelli North local government area of Delta State, is in Delta Central Senatorial District, which Senator Omo-Agege represents at the National Assembly.

A statement by the Director, Communications and Media Strategy, Delta APC Gubernatorial Campaign Organization, Ima Niboro, on Friday, said in applauding the tanker driver, Omo-Agege said his courageous action saved not only his constituents, but prevented a national catastrophe and mourning.

The amount, the lawmaker stated, was his personal donation to appreciate him for risking his life to save others.

Responding, Ejiro thanked the DSP Omo-Agege for his kind donation, even as he used the opportunity to debunk media reports that he was not interested in national honour but in a new tanker.

“I look forward to coming to Abuja for the national honour recommended for me to the President by the Senate. I wish to thank him again for moving the motion,” the tanker driver said

It would be recalled that last week, the Senate resolved to honour Ejiro Otarigho for his heroic act.

The Red Chamber also recommended him to President Muhammadu Buhari for National Honours.

This followed a motion moved by the Deputy President of the Senate and co-sponsored by Senator James Manager (PDP, Delta South) and Senator Peter Nwaoboshi (APC, Delta North).