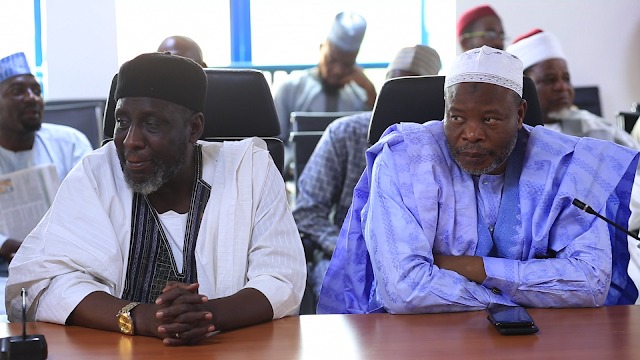 6- Sheikh M.T Sulaiman, Imam Umar Bn Khattab Mosque, Kaduna advised the Chairman on invocation, work and worship: “For you to succeed”, he said, “don’t rely on your experience; surrender all to Allah and pray to Him.” He reminded Zikrullah of what Allah said in the Qur’an on supplication: “And your Lord has said: Pray unto me and I will hear your prayer.” (Ghaafir 40:60) “When you wake up”, Sheikh M. T Sulaiman said, “desert your bed at the middle of the night while others may be sleeping, invoke Allah for yourself and other members of your team.”

When the time came for the Chairman to respond, he expressed his gratitude to the Supreme Council for Shari’ah in Nigeria for the visit. As a Muslim scholar in his right, he spoke with the certainty of the people of knowledge. “Allah has ways of summoning one to duty”; he said, “this one came to us via a phone call before which I had resolved not to perform Hajj for some time to be with the family. But the phone call came announcing this call to duty. We did not lobby for this. We did not speak to any politician or people in government. So, we are only answering Allah’s summon.”

As if in answer to my concern, the Chairman said that their aim is to strengthen the industry and not to alter legacies. “We even have a design”, he said, “to call former staff and officials, chairman and members of any board who left in whatever position, and are still alive; they had contributed in many ways; we can share in their wisdom. Yes, the plan is there to call all of them for exchange of ideas, to learn from what they did right, and improve upon their mistakes. We have no plan of ‘this is my government and my policy is this’. All advice will be worked with to the best of our ability.”

On the point raised by Sheikh Muhammad Bn Usman, Alhaji Zikrullah said “The issue of leaving Makkah on the 8th of Zulhijjah we will start work on it, but you must realise that in Hajj operations we are left at the mercy of our host country; some times you are told on how you are to move from place to another and when, and you have no option. You either leave or you are in trouble; you may want to go at some other time but you are told this is when the vehicle will be available. If you don’t move now, don’t call me again. In Hajj operations, therefore, we know that there is the ideal and the reality, and nothing could be as frustrating as to have no vehicle on the day of Arafat. We shall try our best as members of our team are here, and have heard all you said; we will do what is possible.”

Alhaji Zikrullah is pained on our inability as a nation to fill our quota for Hajj allocation. “We want to reduce the cost of hajj”; said he, “we are aware that nothing good comes cheap, but we also know that our allocation is 95,000 the only reason why we could go with only 65,000 is cost. During my meetings with the Hajj Ministry officials and the Mu’assasah I told them: If you make Hajj 200,000 only, for instance, over one million Nigerians will come for Hajj.”

The NAHCON Chairman’s concern is for the poor Muslims who are eager, more willing to perform the Hajj but who hardly have the means to do so. “Experience has shown”, he said, “that it is the poor that like to go on Hajj. People of means don’t like to go on pilgrimage. The poor-man can go 30 times, but the rich, no, only Ahluttaqwa among the rich will go to Hajj twice. Many a rich man will avoid performing Hajj consecutively; he will opt for sponsoring imams to go to Hajj rather than be involved in the ritual year after year. Then if it is the poor that love Hajj, we must endeavour to make it more affordable to them.”

At this point in his emphasis on the poor and their love for Hajj, I noticed that the Chairman’s gaze was fixed on me. I knew something was coming, but since it lingered I thought I had dodged the bullet, then: “ I’m not saying only the poor go to Hajj “, continued the Chairman, “but the majority of people who go to Hajj are poor; we are serving the poor, but we know those who are serving the rich here. (Laughter) I don’t mention anybody’s name, but for those of us who serve the poor we must continuously make an effort to bring down the price.”

On the increase in the cost of Hajj services, the Chairman said: “The trend even with our host in the holy territories is for the price to increase yearly. If you are proactive you may have yourself trying to contend with the increase every year, yet our people here are poor. In times past state governments sponsored pilgrims, but now that is becoming a thing of the past.

“Nigerians should be proud to go with 95,000 pilgrims and the only way to fill that number is to bring down the price. We have started the journey. The cost has increased this year by at least SAR400 part of which is the newly introduced 300 riyals visa fee. Before now it was free. That is an addition. The Mu’assasah as the gateway to Hajj is there. They have increased the cost of Hajj services. The former Chairman had made them cut down the rates to a certain level. When I went, I tried to have further reduction but to no avail. I said I’m just coming in as a new head, let me have the reduction as a gift (from the Mu’assasah). Eventually, we were able to reduce it to a significant level. If you already have an increase in the rate of hajj services, then you have to battle with some other things to avoid making announcement to the pilgrims on increase in Hajj fares.”

In response to what I alluded to on the members of staff of the Commission in relation to their constant training, the Chairman said: “My team and I,” he commenced, “experienced as you described them, have been able to reduce the rate of accommodation to between 200 to 700 riyals – the same building, the same location. This will neutralise the current increase from visa charges and Mu’assasah services. We have started speaking with the airlines. This year’s price will be lesser than what pilgrims paid last year; I can’t say by how much but we are still working on it. We shall do the same with the catering companies. The quality of the food will not decrease but after our meeting with them, we were able to slightly reduce the rate. We are committed to reducing the rate without compromising the standard.”

On the numbers of days our pilgrims spend in the holy land, the Chairman assured us that: “We are also committed to reducing the number of days spent in the holy land”. He said. “I know it is not easy; we do not have an airport (especially for us and our pilgrims) in Saudi Arabia. We cannot dictate to our host to stop others from landing because we are coming, but certainly, the number of days that we will spend this year will be less than what was spent last year – by how many days I can’t say, but we’ll make that public at the appropriate time.”

Another issue mentioned by the head of the Commission was the Hajj Training Institute. “There is also the hajj training institute”, he averred, “aside pilgrims enlightenment programmes that you alluded to. If there is a degree in events management, dancing, etc. then anyone who wants to be involved in Hajj business should be certificated by a Hajj training institute. I will be one of the enrolled participants for such certificate. It will get to a point where we will block your entry into the Hajj business without certification. Some people just assume that Hajj business is all about making money, but the reality is that Hajj business is about profit and loss. There are times you return home crying due to loss incurred in a given operation. But some people who have extra money just think they can come into the Hajj business. We feel that all should have proper training and be certificated. I hope when the time comes a body like yours will be willing to support us.

“Thank you once again for coming. Our doors are open 24/7. The keys are lost, so the doors cannot be locked a second time. We rely on Allah to support us. Wa maa tashaa’una illa an yashaa Allah, (we cannot do anything unless Allah wills it to be so…) (at-Takweer 81:29)

“Coronavirus is not about Hajj. It is about the whole world. We need your prayers, for Allah to temper justice with mercy.”

He supplicated Allah by quoting a Hadeeth in which the Prophet, sallallaahu alaihi wa sallam used to supplicate against ailments: “Allaahumma innee a’udhu bika minal-barasi, wal-jununi, wal-judhaami, wa sayyi’il-asqaami (O Allah! I seek refuge in You from leucoderma, insanity, leprosy and evil diseases).”