“As a matter of priority , special emphasis should be made on the SECURITY of the state over the years. There has been general scenario of security breaches in some parts of the state, this situation has undermined progress in the state. You would all agree with me that most security challenges are caused by idleness, low level of education, misinformation, rumor mongering, ethnic chauvinism and religious bigotry which all combine to create the very insecure environment which is being witnessed. 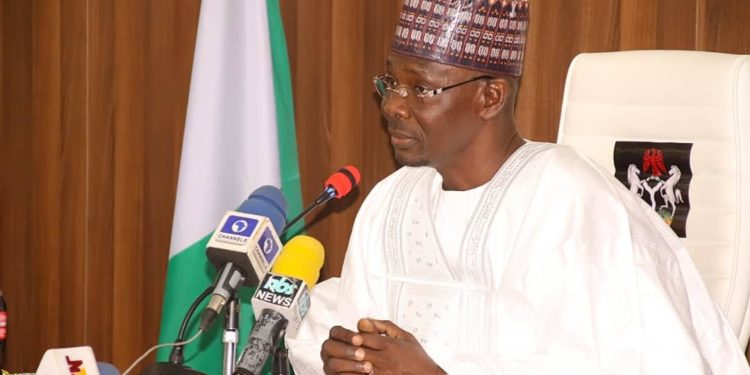 In the absence of peace, security and order, progress would remain a mirage. This despondent state of affairs will be met with serious measures by our administration. Towards this end, we will review and upgrade the extant articulated and established laws by our predecessor.

“Allied to the issue of security is the concern of decreasing level of UNITY amongst our people. It is an indisputable fact that unity in the land is a panacea for peaceful co-existence and meaningful progress. In this connection, our administration will set up a formal advisory forum consisting of elder statesmen, community and opinion leaders, former public office holders of proven integrity with track record to guide the government on certain crucial issues concerning the state.

“The forum will also serve as a platform for cross fertilisation of ideas between government and the people and an instrument for peace and consensus building amongst our people, security of lives and properties. According to a wise saying ‘for a government to be responsible, it must cater for the lives and properties of its people by ensuring that they are secured’”

The above is the inaugural address of Governor Abdullahi Sule on

assumption of office on 29th of May 2019. The governor in three years succeeded in changing the narrative by ensuring that Nasarawa State witnessed less or no communal skirmishes at all. This feat can be attributed to consolidating on his predecessor’s peace and conflict resolution approach.

Engineer Sule’s first approach in tackling security issues was his intensifying of security by approving establishment of additional security base, bringing the entire number to sixteen camps. The governor, in a different fora, said government will guarantee necessary safety to shelter the investment of willing investors.

In furtherance of his pledge to the security of lives and properties within the border communities of the state, he paid a visit to Governor Samuel Ortom of Benue State in order to build synergy towards addressing the intermittent cross border conflict between Fulani herders and farmers in the two states. The steps taken within his hundred days in office has mitigated the brim over effect which continues to subvert the fragile tranquility experienced between the sister states. 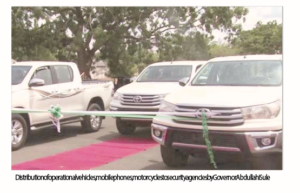 Governor Abdullahi Sule also welcomed his Benue State counterpart in the company of multitude of stakeholders, including traditional rulers from the state and members of Miyyeti Allah, with a promise to embrace all avenues that would proffer solution to the unabating skirmishes.

The three hours parley no doubt is the first of its kind in the history of Nasarawa State security, as governor and traditional rulers spoke extensively on measures that would  bring the persistent carnage to the barest minimum. The inauguration of Nasarawa State Boundary Commission was the beginning of good things to come as well as an end to the rising waves of crisis experienced within the borders of the state.

The inauguration of Ibrahim Aliyu as the chairman of Boundary Commission was a welcome development, as the governor responds to the call by a traditional ruler, His Royal Highness, the Andoma of Doma, Alhaji Ahmadu Aliyu Ogah, urging the constituted authorities to set up members of State Boundary Commission so as to tackle the main cause of wanton disturbances at the border communities of Benue and Nasarawa states.

His Excellency also reiterated his administration’s eagerness to nip the prolonged Bassa/Igbira ethnic skirmishes in Toto local government of the state, in the bud by ensuring that he brings unity to the warring communities who are seeing themselves as life time enemies. Governor Sule has built a bridge of peace between Bassa and Igbira.

The unabated communal and ethnic conflict between the two tribes have yielded prolific results subsequent to the timely intervention of Engineer Abdullahi Sule reuniting the two warring tribes in the state. Other holistic efforts of the governor to ensure an everlasting peace was the integration process by bringing Bassa and Igbira to a round table. This effort is  praiseworthy and deserving of a medal. The reason being that all the energy and money invested by the then President Olusegun Obasanjo and the then governor, Abdullahi Adamu to end the feud did not yield any results.

Besides, the frantic measures taken by the then governor, Abdullahi Adamu, the first executive governor to end the communal and ethnic clashes by committing N500,000 to compensate the two tribes through inter-marriage was botched.

The immediate past governor, Umaru Tanko Al-Makura, during his reign, did his possible best to ensure that any Bassa or Igbira that embraced inter-marriage would be empowered with N500,000, an intention meant to curtail the sporadic clashes that paralysed social-economic activities within that axis for years failed woefully. The integration process was a paradigm shift, as Bassa people pledged their commitment to fast track the eventual return of all those displaced during the conflict.

Engineer Abdullahi Sule adopted a workable and formidable mechanism to nip insecurity in the bud in the state. Other precautionary measures to tackle the rising waves of insecurity was the swift step taken by inaugurating the state Community Policing Advisory Council to complement the existing Community Based Conflict Mechanism of the immediate past administration.

The midas touch of the governor recently was the distribution of five operational vehicles with the sole aim of boosting security of lives and properties, Engineer Abdullahi Sule did not relent in halving crime and criminality in the state. The governor recently disbursed two operational vehicles to army and three to the Nigeria police force, which was a replicate of his hand of fellowship in year 2020 and 2021 where vehicles, motorcycles, mattresses and mobile phones were donated to security operatives.

With the serene environment created by governor Abdullahi Sule, the Nigeria Investment Promotion Council (NIPC) Abuja, placed the state on third position alongside Rivers State, Nasarawa and Rivers State emerged third with a joint investment of $300 million representing 18 percent of total investment during the period under review. With these records, the industrialisation efforts of Engineer Abdullahi Sule has yielded desired results.

It is worthy of note that the peaceful environment in Nasarawa State continues to usher in development partners into the ‘Home of Solid minerals’. Security and peace of the state remains the topmost priority of Governor Abdullahi Sule’s administration. The governor placed the state on the list of states with ease of doing business, marshaled out robust security architecture for the state to be more secured and attractive to investors.