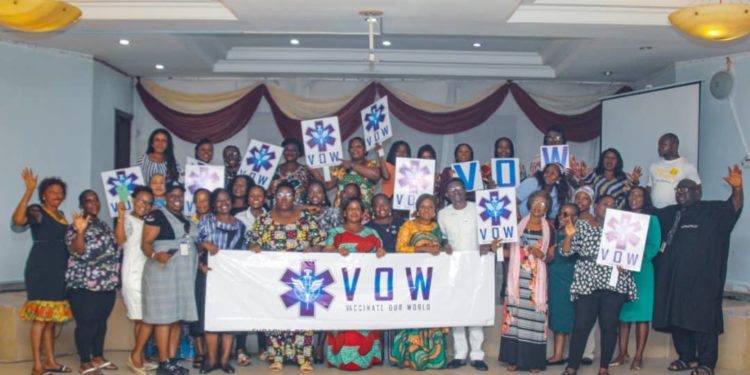 Group photograph of participants at the AHF organised parley with leaders of women groups in Cross Rive state, held in Calabar to build champions against Covid-19 Vaccine Hesitancy

The engagement which took place in Calabar Thursday June 16,  had women groups from the 18 Local Government Areas of the state, like the Ekori Women’s League, Ambitious Ladies Foundation and others.

Even though the vaccines are available in most of the healthcare centres, residents of Cross River have refused to take them for fear of myths mostly on social media and of reactions.

Speaking to the women, Dr. Echey Ijezie, Country Programme Director, AHF Nigeria, Country Office, said the essence of the gathering was to make women champions in the fight against COVID-19 hesitancy in the state

Ijezie said women played key roles at the community level and are highly influential and so were important in any form of advocacy and information dissemination.

He said despite the false information being peddled on Social media, COVID-19 was still very much around the corner and was still killing people.

“We decided to bring women together as champions to fight the challenge of vaccine hesitancy and also listen to their fears because the public trust women.

“We want to ensure that we let the people know the importance of getting vaccinated and also assuage their fears which are mostly myths peddled by uninformed people.

“it is not fair that the government was spending so much to acquire vaccines, including the ones donated by other nations and we don’t use the vaccines, preferring to believe falsehood on the social media,” he said

Chabo said according to data available, only 17 per cent of Cross River’s target population have received their first dose of the vaccine and only 11 per cent have taken the first and second doses.

“This means that those that are fully protected are just 11 per cent of the target population of the state; this is very poor when compared with some other states that have achieved over 90 per cent vaccination success.

“My message to the public is that those not yet vaccinated should respond as the vaccines are free in all health facilities in the state,” she said.

On the issue of adverse reactions after receiving the vaccine, Chabo noted that Adverse Event Following Immunisation (AEFI) was normal as different body compositions responded differently to vaccines

She maintained that due to the low rate of immunisation Cross River has not attained herd immunity, so, it was important for everyone to still use their nose masks, wash their hands and sanitise properly whether vaccinated or not.

“Vaccinated persons can still get infected, they may not go down with severe illness and death but can be healthy carriers, spreading the disease to others, this is why you still need to protect yourself and those around you,” she asserted.

Similarly, one of the participants Mrs Itam Ofor, President Ekori Progressive Women’s League said before she came, she had a lot of misgivings about the vaccines.

She however added that most of them have been cleared and she would go back to sensitise her people on the need to get vaccinated to curb the spread of the virus that was still very much around.