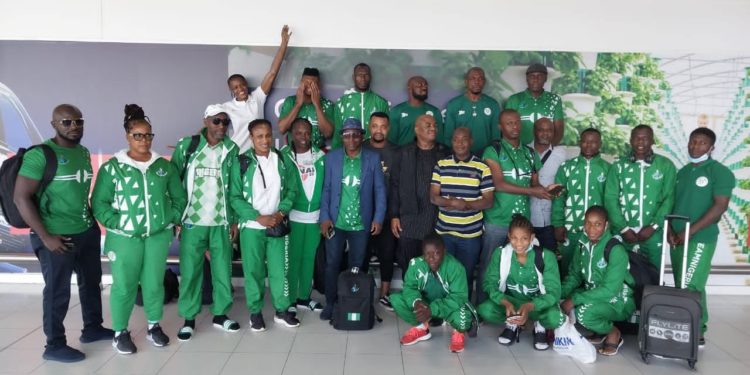 Team Nigeria’s athletes and officials at the just concluded 2022 Commonwealth Games Birmingham, United Kingdom, put smiles on the faces of millions of Nigerians in distress amid the economic downturn and rising insecurity in the country.  With their incredible performance at the Games, they have lifted the spirit of most Nigerians and given them reasons to look on the brighter side of life.

It is instructive to note that Team Nigeria won a record 12 gold, 9 silver, and 14 bronze, a total of 35 medals. The gold medal haul is the highest at a single Commonwealth Games for Nigeria, representing its best performance ever.

Ese Brume ensured Team Nigeria set a new record at the games by claiming the gold medal in the women’s long jump event. Brume, 26, leaped to a new Commonwealth Games record of 7.00m to reclaim her crown in the event. The Delta-born athlete earlier set a new games record of 6.99m with her second jump of the day.

Team Nigeria ended the final day on a resounding note with Oluwatobiloba Amusan winning a gold medal in the women’s 100m hurdles, and then inspired Nigeria’s women relay team to win an elusive 4x100m relay gold with a new African record of 42.10 seconds which erased the one-month-old 42.22 seconds African record they set in Oregon, USA, at the World Athletics championships.

Impressively, many new records were set as old Commonwealth records were broken by Nigerian athletes, and jinxes of over four decades of no medals in some sports were also broken. This commendable outing ensured Nigeria finished as the best ranked African country on the medals table and 7th best at the Games. A signpost for a better future in Nigeria’s sports.

We join other Nigerians in congratulating athletes and, their handlers and officials for this history-making feat at the 2022 Commonwealth Games. The athletes have once again demonstrated the true worth of the Nigerian spirit.

No doubt, Team Nigeria’s success in Birmingham proved that the country’s sports are on the rise again and we urge that all hands should be on the deck to sustain and improve on this impressive feat as we work toward the 2024 Olympic Games in Paris, France.

The breakdown of Team Nigeria’s medal haul at the Birmingham Games indicates that all 12 gold medals were won by female athletes. The women also accounted for four silver and seven bronze, totaling 23 medals won by women out of the 35 medals amassed by the team. The men were only responsible for 12, comprising three silver and eight bronze medals.

Adijat Adenike Olarinoye set the tone for Nigeria by claiming the gold medal in the weightlifting 55kg category before Rafiatu Folashade Lawal outwitted her rivals to claim the number one position in the 59kg category.

The quartet of Miesinnei Mercy Genesis (50 kg), Blessing Oborududu (57 kg), and Odunayo Adekuroye (57kg) won gold medals in women’s freestyle wrestling, while Oluwatobiloba Amusan took the gold medal in the women’s long jump before she inspired the trio of Favour Ofili, Rosemary Chukwuma and Grace Nkwocha to victory in the women’s 4X100m relay.

This newspaper salutes all the athletes for putting up a befitting performance against the Commonwealth Games’ best. As we commend the athletes, particularly the girls, for making the country proud under very difficult circumstances, we also commend the Federal Ministry of Youth and Sports for their show of appreciation and proactiveness in splashing the cash on the medalists in which the gold medalists received $5,000 each, while their coaches were also given $3,000 each, just as silver and bronze medalists were also received $3,000 and $2,000 each respectively.

It was a departure from the past where Nigerian athletes frequently clamoured over pay disputes, thereby embarrassing the country before the international community. This timely gesture is quite commendable and it will spur the athletes to greater success in future games.

We also urge the sports authorities to sustain the new found tempo by embarking on a youth development programme that will discover talents who will be ready and able to take over from this team when the time comes and continue to make the nation proud. In our view, this is no time to rest on this new found fame. The momentum must be seized and built upon through a policy of catch them young.