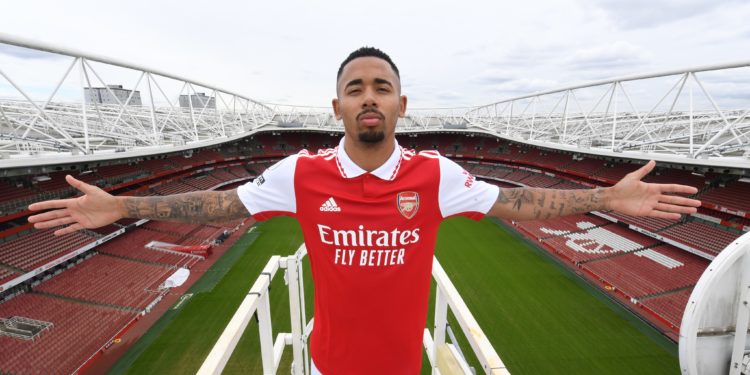 The North London Club have been looking forward to adding to their attacking options in this summer transfer window following the decision to allow Pierre-Emerick Aubameyang to join Catalan giants Barcelona back in January and Alexandre Lacazette who has also left for former club Lyon, leaving Eddie Nketiah as the only recognized Centre-forward in the senior team setup.

Fabrizio Romano disclosed in April that the technical director of Arsenal FC, Edu had recently spoken with Gabriel Jesus’ and that Manchester City striker was one of the names on the club’s shortlist of profiles.

The Brazilian international has now been formally introduced by the north Londoners as their fourth summer acquisition, joining Matt Turner, Marquinhos, and Fabio Vieira.

The Club released a statement on Monday and stated the Striker would wear the number 9 shirt and would be available for the teams pre-season fixtures.

“Gabriel will wear the number 9 shirt and will join up with the Gunners squad for pre-season training soon,”

“The striker has signed a long-term contract with the club in a deal worth £45m”.

The technical director of the North London Club expressed his joy over their new signing he said:

“We are delighted that we have secured the transfer of Gabriel. Everyone who knows football well knows the qualities of Gabriel Jesus.

“Gabriel is a player who we have admired for a long time now. He is 25 years old and an established Brazil international who has consistently demonstrated that he is a player at a very high level. We look forward to seeing him join up with his new teammates ahead of the new season.

“We all welcome Gabriel to Arsenal.

The 25-year-old might be considered Arsenal’s first-choice forward, this is attributed to the fact that he had a strong 2021/2022 season with Manchester City, scoring 13 goals and making 12 assists across all competitions to help Pep Guardiola’s team win their fourth Premier League championship in as few as five years, he also scored 95 goals in 236 games for the club

Mikel Arteta the club’s manager showed his excitement after the announcement saying:

“I’m very excited. The club has done a tremendous job to recruit a player of this stature. I know Gabriel personally very well, and we all know him well from his time in the Premier League and being really successful here… I am really happy.”

In a statement by the player, he expressed his love for tye club and his enthusiasm joining the club, he said.

“I have followed followed Arsenal when I was young because of (Thiery) Henry.

“Obviously I didn’t follow too many European teams but when I saw some of the players that play here, I was like wow this club is big.

“When I played against Arsenal, I was looking at the Emirates and it was a very good stadium, so I’m very excited to play here.

” I’m so happy to sign for this club. Since day one when I knew I could come play for Arsenal, I was happy. He added.