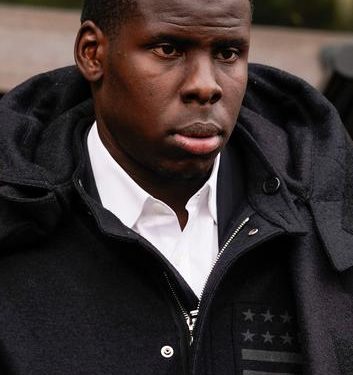 English Premier League footballer, Kurt Zouma, has been instructed to carry out 12-month community service and banned from keeping cats for five years after pleading guilty to counts charges of causing unwarranted suffering to a protected animal.

Recall that earlier this year, the West Ham and France defender prompted widespread condemnation after footage filmed by his brother, Yoan Zouma, emerged of Zouma throwing a cat across his kitchen, before throwing a pair of shoes at it and slapping its head. The Snapchat clip, from February, featured Zouma laughing and saying: “I swear I’ll kill it.”

The 27-year-old has been ordered to pay court costs of nearly £9,000. His brother was ordered to carry out 140 hours community service and also banned from owning cats for five years.

He (Zouma) pleaded guilty at Thames Magistrates Court in East London last week to two counts of causing unwarranted suffering to a cat, after blaming the family pet for damaging a chair. His two male Bengal cats have since been signed over to be rehomed.

The court heard the “premeditated” attack was filmed by his younger brother, the lower-league footballer Yoan, 24, who sent it to a woman he was due to go on a date with.

In a statement, the RSPCA chief inspectorate officer, Dermot Murphy, said: “We hope this case will serve as a reminder that all animals deserve to be treated with kindness, compassion and respect, and that we will not tolerate cruelty by anybody.”

In a statement, a West Ham club spokesperson said: “West Ham United wishes to make clear that we condemn in the strongest terms any form of animal abuse or cruelty. This type of behaviour is unacceptable and is not in line with the values of the football club.

He added that: “Kurt admitted at the earliest opportunity that what he did was wrong. He has apologised without reservation.

“We hope that now the court has reached its decision, everyone will allow Kurt the chance to learn from his mistake and move on.”

Sentencing the brothers at the 15-minute hearing, the district judge Susan Holdham said: “Both of you took part in this disgraceful and reprehensible act with this pet cat.

“You must be aware that others look up to you and many young people aspire to emulate you.”

The judge said that The EPL Defender and his brother Yoan expressed “genuine remorse” and spoke to them against such act subsequently.