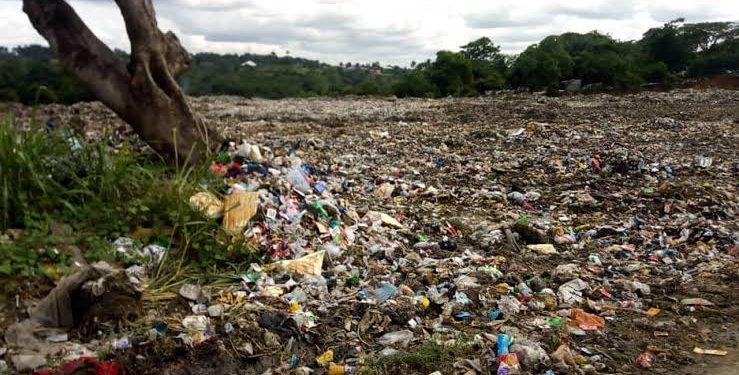 Anxiety has gripped Uyo, the Akwa Ibom State capital, over heaps of refuse scattered over the city centre and its environs.
Worried by the ugly development, which concerned residents fear could spark epidemic due to offensive stench from the dump sites, residents have raised the alarm, calling on government to impress it on relevant authorities to evacuate them.
Checks by LEADERSHIP revealed that Government House and other institutions including the A-Divisional Police station, Council of Chiefs, the state judiciary headquarters building, Uyo local government areas and the local residents of Barracks Road, the most affected by the dumpsites’ stench.
“Aside these major dumpsites on the stretch of the Uyo village road, refuse heaps have again begun to pile in some parts of the town after an emergency intervention late last month following public outcry”, Akan Inyang, a resident of Barracks Road, told our correspondent.
“The new dumpsite located inside a ravine along Uyo village road came into use after it was relocated from the old site near a residential area. When the stench became so toxic, the state government was forced to carry out the relocation of some residents whose health were affected”, he recalled.
He lamented that “since a Memorandum of Understanding (MoU) the state government signed with a private company for a relocation to a more convenient site far from the city, nothing had been done in that regard as the stench has become increasingly distasteful to the surrounding offices”, an official at the state judiciary headquarters, who would not want his name in print, noted.
“Because of constant dumping of the wastes and physical burning of the refuse without using incinerator as it’s done in other places, the Uyo Village Road, that play host to the major dumpsite, has been completely defaced with the tar eroded because of fire pressure.”
“Vehicles can barely pass because the road has been reduced to a mere track due to frequent refuse dumps that spill into the road and impeding traffic. We can’t comfortably work in this office because of foul smells from the dumpsite”, another employee of Uyo Local Government Council, who spoke on condition of anonymity, lamented.

More worrisome is the health hazards it poses to the people, as the lives of the residents and the workers around the affected areas, according to him, remain under threat of epidemic.

It was gathered that most of these sites are without receptacles especially in poor residential areas the Atiku Abubakar Avenue, Ikot Ekpene road, Itu-Calabar road, Ikot Ambang, Itam market, IBB way, Nwaniba road, Obio Imoh Street and many others.

“It is unfortunate that a state adjudged to be the cleanest state for four consecutive years could allow the capital city to be filled with filth and the air saturated with stench oozing from waste disposal sites.

“It is the right of all citizens and residents to have unhindered access to government facilities, the poor equally pay tax and they should not in any manner be discriminated, whatever is good for those dwelling in posh areas same should also be provided for the poor.”

However, a senior official of the state Environmental Sanitation and Wastes Management Agency, who confided in our correspondent, blamed it on high price of diesel as the major problem hampering their operations.

The official who spoke on condition of anonymity, however, disclosed that the waste management agency chairman, Prince Akpan Ikim, “is planning to hire the necessary equipment needed for evacuation for the monthly environmental sanitation exercise this weekend to evacuate the piled up refuse as a cost saving measure”.

“Our problem is diesel. The high cost of diesel is affecting our evacuation process. You know we have trucks but we hire most of other equipment needed for the evacuation like bulldozers and compactors once a month.

“So, since government is the one subsidising us, we intend to use the opportunity of the monthly sanitation exercise to utilise the other equipment that government will hire to evacuate the refuse although in some areas we are already evacuating,” he said.