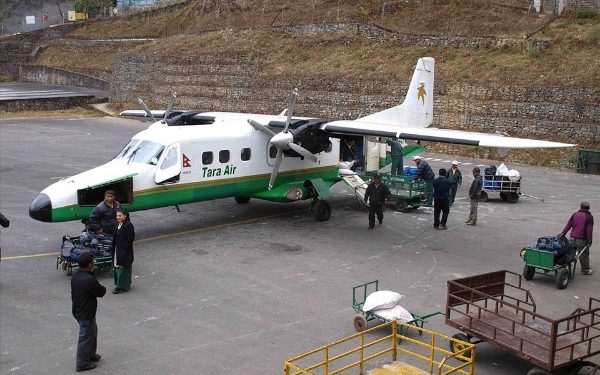 A plane with 22 people on board flying on a popular tourist route has been declared missing in Nepal’s mountains.

The Tara Airlines plane, which was yesterday on a 15-minute scheduled flight to the mountain town of Jomsom, took off from Pokhara, 200km (124 miles) east of Kathmandu. It lost contact with the airport tower shortly after takeoff.

A police official Ramesh Thapa said there was no information on the Twin Otter aircraft and a search was under way.

He said there were 19 passengers on board and three crew members.

Phanindra Mani Pokharel, a spokesperson at the home affairs ministry, said two helicopters were deployed for a search operation but added that visibility was low.

“The bad weather is likely to hamper the search operation. The visibility is so poor that nothing can be seen,” Pokharel said.

Six foreigners were on board the plane, including four Indians and two Germans, a police official, who was not authorised to speak to the media, told The Associated Press on condition of anonymity.

The state-owned Nepal Television said villagers saw an aircraft on fire at the source of the Lyanku Khola River at the foot of the Himalayan mountain Manapathi, in a district bordering Tibet.

“One search helicopter returned to Jomsom due to bad weather without locating the plane,” the Civil Aviation Authority of Nepal said in a statement.

“Helicopters are ready to take off for search from Kathmandu, Pokhara and Jomsom once weather conditions improve. Army and police search teams have left towards the site.”

It has rained in the area for the past few days but flights have operated normally. Planes on that route fly between mountains before landing in a valley.

It is a popular route with foreign hikers who trek on the mountain trails, and also with Indian and Nepalese pilgrims who visit the revered Muktinath temple.

Jomsom is a popular trekking destination in the Himalayas about 20 minutes by plane from Pokhara.

In 2016, a Tara Airlines Twin Otter flying the same route crashed after takeoff, killing all 23 people aboard.

In 2014, a Nepal Airlines plane flying from Pokhara to Jumla crashed, killing all 18 on board.