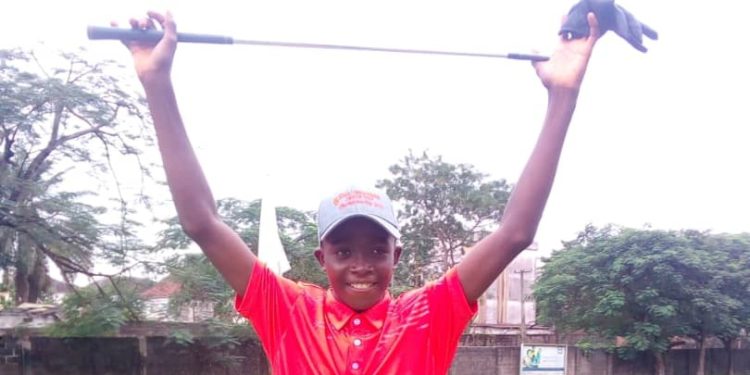 Godwin Okoko of the David Mark International Golf Academy, Otukpo, claimed a third IBB Junior Open Championships title by cruising to a 221 gross victory after three day of golfing on the 18-holes golf course of the IBB Golf and Country Golf Club, Abuja.

Speaking after receiving the giant trophy and cheque for the one thousand dollar prize money, Okoko expressed joy at winning the championship for a third consecutive time.

The 17-year-old golfer, who said his role model is Tiger Woods, declared that his target is to play in the PGA tournament.

“I feel excited and I’m proud of myself and my coaches because they were the ones that made me come out on top. I also thank the IBB ladies for their efforts because if not for them, I don’t think I would have gone far in golf like this. After this, I want to see myself playing in the PGA Golf tournament,” he said.

The Lady Captain of the IBB Golf and Country Club, Joy Ikwue, expressed her delight at the successful conclusion of the 2022 IBB Junior Open Championships, saying the next Tigers Woods are in the making.

“We thank God, it wasn’t easy at all organising the three day tournament and finally we got the winner, who successfully defended the title.

“We were glad he won a thousand dollars which is a good start and it will help his education. We hope they keep going higher and higher for us, not just here in Nigeria but beyond.

“They are our future and we should try our best to invest more on them, we will never regret it. We are glad we were able to do what we did today,” Ikwue said.