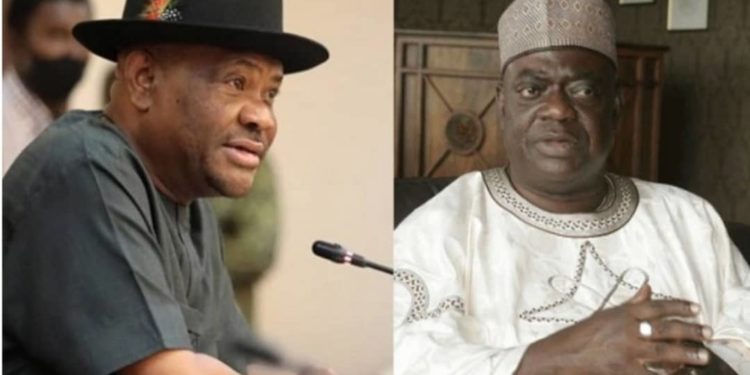 Speaking with journalists in Port Harcourt on Thursday, SNPA leader, Livingstone Wechie, said Aliyu acted far below dignity with a ‘primordial and archaic sentiment and unstatemanly.’

Wechie stated that the former governor’s utterances were suspicious and designed to fuel crisis and fan the embers of avoidable conflict within the ranks of the party at a time the Peoples Democratic Party (PDP) should be mending walls and making peace.

He insisted that the Rivers State governor remained many poles apart in capacity, temperament and political character when compared with Aliyu.

The SNPA leader said: “The records of political profile between both figures are extremely apart as a Nyesom Wike has built an unsurpassable political clout that dwarfs everything Babangida Aliyu represents and this is not in dispute.

“Governor Nyesom Wike in his capacity is in a class of his own as the lawyers will say sui generis. His marks must be kept close to the chest drawing from the lessons of Donald Trump’s political pedigree in the United States of America whose feat continues to hunt American politics because of his background of not being among the ruling family or class yet took America by storm in such unwavering propensity.

“It is on record that Babangida Aliyu in 2015 as an incumbent failed to produce a successor as Governor of Niger State which candidate he allegedly foisted on the PDP and went on to lose both the Governorship seat to the opposition APC as well as his own Senatorial election as a seating Governor and this is quite humiliating.

“Meanwhile the same Wike whose profile he seeks to undermine won his governorship election same year wherein he defeated a sitting governor and grabbed all the state and National Assembly seats in Rivers state as an ordinary civilian who was not occupying any office at the time he ran for that office in 2015.

“Intrinsically it was under the watch and charge of the same Nyesom Wike as a former Minister and governorship candidate at the time that the PDP got the highest number of votes both at the governorship and Presidential election and this was also replicated back to back in 2019 by the same person.

“It is further on record that Babangida Aliyu after serially failing to gain any space in Niger State in 2019 reportedly imposed another governorship candidate but was again thoroughly trounced and cut to size in his own state while Governor Nyesom Wike won back to back and retained Rivers State as a complete PDP State till date.”