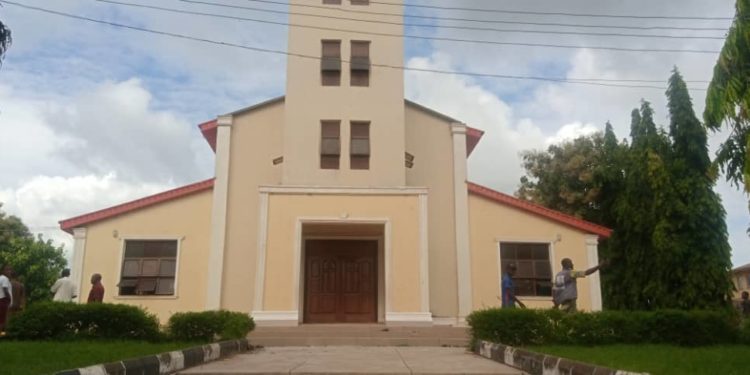 I still can’t live down the horror of terrorists unleashing their version of holocaust on worshippers at the St Francis Catholic Church, Owo, on Pentecost Sunday. In these days of high-wire politics and circus-show presidential primaries, It is tempting to succumb to our usual malaise of unshockability.

The razzmatazz of political jostling takes the centre stage while a depopulation programme is being clinically executed. Even if life must go on, what manner of life are we living if scores of people can be so savagely wiped out by terrorists in broad day light while the rest of us simply shrug?

We are all potential victims of these savages, just as we are victims of the political class who regularly promise us paradise but consistently consign us to hellish existence.
At the turn of every electoral cycle, the best and the worst of our emotions are skilfully harnessed by politicians so that we may replace one lord with another without any fundamental change in the defective contract that binds us together. As at the time this column was going to bed, several political parties had announced their candidates:
Malik Ado-Ibrahim (YPP); Rabiu Musa Kwankwaso (NNPP), Omoyele Sowore (AAC); Peter Obi (LP); Adewole Adebayo (SDP); Kola Abiola ( PRP); Bola Ahmed Tinubu (APC); Atiku Abubakar (PDP); Hamza Al-Mustapha (AA); Christopher Imumulen (AP); Dumebi Kachikwu (ADC); Yusuf Mamman Dan Talle (APM); Peter Umeadi (APGA); Okwudili Anyajike (NRM)

You are welcome to read your Tarot cards whichever way you want but take wise counsel —disagree agreeably and never agree disagreeably. The political elite may seem to be at each other’s throats but at the end of the day, blind supporters will find out that the bond of Bribe is stronger than that of Tribe. We are not confronted with competing ideologies but different models of the same political brand. Am I communicating?

In this circumstance, perhaps one should weigh what each candidate is bringing to the table. What kind of vision? What quantum of integrity? A simple test may aid you in making up your mind: If you were to buy a second-hand car from one of the candidates, who would you buy from?
An unnamed wise man once said: “The biggest flaw of democracy is the underlying assumption that everybody thinks and is rational. Unfortunately, that is not so. The vote of an idiot is the same as that of a genius … Now, in any society, the geniuses, or those with the capacity to reason, are always in the slimmest minority — so the idiots of the society will always win… That’s why politicians don’t waste their time on intellectuals… They know what to do and where to go to get their votes.”

Whatever we do, we must always remember that we have to live with the choices we make. If we choose ‘stomach infrastructure’ or primordial ethnic sentiments over and above integrity and vision, we will have to lie on the bed we make — will it be made of thorns or of roses? The answer, my friends, is blowing in the wind.

But I digress! The hoopla generated by politics shouldn’t deaden our sensitivity to the Owo massacre. Every family affected will never be the same again. There are some injuries that are everlasting. Some absences create a void impossible to fill. Some survivors will never be able to wrap their heads around the fact that in one moment their fellow parishioners were in front of the sanctuary and the next moment they were on their way to the mortuary. Some minds have been damaged forever!
According to the renowned psychohistorian, Robert Lifton, “Survivors of disaster often sense that their world has ‘collapsed’ and they engage in a struggle to go on living. One of the inner battles they have to fight is finding meaning in death and locating death’s place in the continuity of life.”
I mourn with all the families affected, even as I nurse my own personal pain at the gruesome killing of a fine couple, Dr (Sir) John Adesina Ajanaku and his wife, Lady Susannah Adebimpe Ajanaku. Both were devoted parishioners who wouldn’t miss Sunday mass for any reason, more so on Pentecost Sunday. The self-effacing Dr. Ajanaku and I served the Great Ife Alumni for many years. He was the Chairman of Owo Branch and it was during his tenure that the branch became one of the most vibrant among the 30 odd branches all over the federation.

According to eye witnesses, the attack was carried out by gunmen disguised as worshippers before entering the church’s premises just as the mass was winding up. Once they entered the church premises, they threw an IED before starting their shooting spree. They were not hooded. They shot indiscriminately, not minding women or children.
“Immediately I got up”, said one of the survivors, “I saw right by my side, in my front, dead bodies. There were a lot of dead children. Two siblings; their brains were right on the floor, right in my face. Old women in their CWO (Catholic Women) uniform, dead. I saw people dead on the altar, but the priest was alive… My dad was by the church door, He said that they were in military camouflage, and he saw one of them with an AK-47. He said they were shooting through the windows ….”
Bishop Jude Arogundade, the chief shepherd of Catholics in Ondo Diocese was inconsolable: “This is madness! All over the world, there is nowhere people will plan to come and kill babies, children, husbands and wives worshipping on a special day, the Pentecost day. It’s quite unbelievable that somebody will come and the intention is to kill everybody in that church. Those who were running out were being shot from outside, and those who were inside were being shot inside .…”
Video clips showing the extent of the massacre have elicited condemnation from every corner of the globe. The Vatican issued a statement stating that, “The Pope has learned of the attack on the church in Ondo, Nigeria and the deaths of dozens of worshippers, many children, during the celebration of Pentecost. While the details are being clarified, Pope Francis prays for the victims and the country, painfully affected at a time of celebration, and entrusts them both to the Lord so that he may send his spirit to console them.”
Both Governor Akeredolu and President Buhari have promised that the government will ensure that the killers are brought to book. Interior Minister Rauf Aregbesola later informed a grieving nation that the attack had been linked to the terrorist group, Islamic State West Africa Province (ISWAP). Not a few people wondered how the government could have so swiftly identified the killers when the police investigation was still ongoing.
As always, critical questions are being asked by analysts. Could the fact of Owo being the hometown of Governor Akeredolu be of any significance in the terrorist’s choice of target? Is someone trying to get back at the man who is most vociferous about his campaign against open grazing?
In that same Owo axis, indeed in nearby Ifon, the traditional ruler of the town, the Olufon of Ifon, Oba Israel Adeusi, was killed by bandits in November 2020. His killers have never been found. Indigenes of the town have complained of harassment by the security agencies who, instead of going after the murderers seem to be more intent on caging the bereaved community.
Residents of several communities in that area have had to abandon their farming activities and relocate to safer places when armed bandits took over their communities. In retrospect now, it was a matter of time before the assailants hit Owo.
“It is a black Sunday in Owo”, lamented Akeredolu. “Our hearts are heavy. Our peace and tranquillity have been attacked by the enemies of the people. This is a personal loss; an attack on our dear state.”
Last May, an expatriate engineer was kidnapped at Ogbonmo area of Ijebu-Owo in Owo Local Government Area. The kidnappers also killed a soldier who was serving as a security escort of the victim together with the driver. Some communities such as Okeluse, Elegbeka and Ute near Ifon (the same Ose LGA) have relocated to Akure for security reasons while Osomalo camp has reportedly been attacked by suspected herdsmen. Insecurity has become part and parcel of life in some of those places. Abominable!
To the children of the Ajanakus who were suddenly made orphans through the killing of both their parents, and to all families affected by the tragedy, I have nothing but an invocation: God will beam His light into the present darkness and expose the savages. God will comfort you and turn your mourning into joy. The Lord God will wipe your tears and heal you from within.