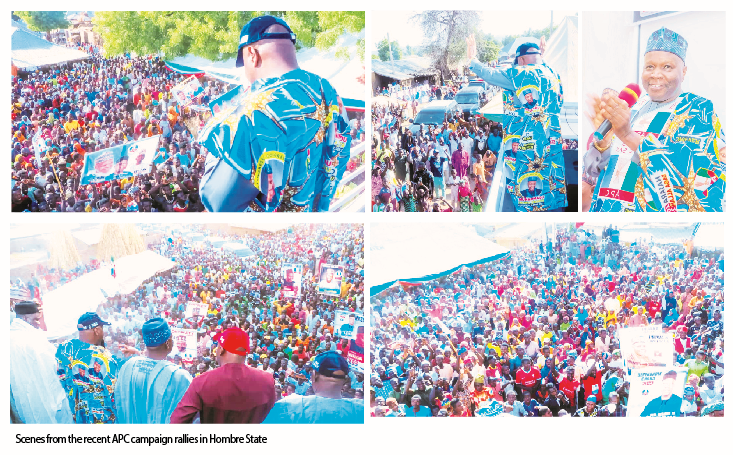 After a grueling but serious electioneering campaign from ward 1 to 114 in Gombe State, it became crystal clear that Muhammadu Inuwa Yahaya is really a man after the heart of the people in Jewel of the Savannah. No doubt, he one everyone is looking upon to deliver a long standing yearning of  the Greater Gombe dreams.

Since December 10, 2022 when the All Progressives Congress (APC) launched its gubernatorial campaign at the Pantami Township Stadium Gombe, it had been a thrilling and ecstatic moment of encomiums and expression of gratitude to a man who has made the most difference in the psyche of the citizens since the dawn of democracy in the state.

As it is often said in the social circle, that ‘the masquerade that dances first often ends up becoming a spectator, when the time the standard bearer of the governing APC in the 2023 governorship race entered the electioneering campaign, all other political party campaigns were dwarfed by the upswing momentum of the funfare and mammoth crowds that thronged  to  listen to what the Gombe State governor had to say.

The crowds were massive and the attendant ecstatic jubilations were a sign of victory indeed.

For a man that made the people a center point of his administration, it wasn’t a surprise at all that people trooped out enmasse to attend the campaign rallies.

You could feel the pulse of the people’s admiration and regards for a man who has turned around many sectors of the state into a living testimonials as opposed to previous disgruntled scenario often witnessed in the past election rallies. No fights. No rancor.No attacks.It was one of the most peaceful and incident free rallies in recent history of polical activities in Gombe despite the fact that the  campaigns sometimes last till 2 in the morning.

Avid political observers were quick to point out that the seriousness  of Governor Inuwa Yahaya’s re-election campaign in the11 local government areas of the state, paints the portrait of the Dan Maje as serious minded patriot who never takes his people for granted and never leaves to chances, matters of the people.

He believes that the needs of the people are many and like he did during his first term campaign, he listened to the people’s demands in their habitat so as to meet the most urgent care necessary for them. He leaves no community out of his campaign itinerary. From the mountainous communities in the southern zone to the savannah plains of the northern zone and the hinterland communities in the central district.

The campaign was a huge success as many writers have gone to town with vast positive headlines.

However, there are many takeaways from what seems a normal routine electoral practice. The style of Inuwa Yahaya’s campaign is a demonstration of uncommon commitment, unlimited enthusiasm and a passion for excellence by a Governor well received and genuinely accepted not just by a few, but by majority of his people.

The people in turn reciprocated with a genuine show of love and solidarity, becrowding his motorcade with singing and dancing and struggling to have a hand shake with a man who has brought so much relief to the old and the youths as well as women and the business ecosystem.

Every where Inuwa visited, his first words were always words of appreciation. He then appeals to them that even though the resources were not enough; the pandemic seasons stole some time, his administration nonetheless,was able to clear the list of all the campaign promises.He will then ask them what they wanted and the community leaders will make their needs known.

The Dan Majen Gombe will tell them not only what will suit their minds but also explain how he will deliver and give a hope that the people can see and touch. He will remind them of how impossible things looked at the time he was coming in and how far his administration has gone in solving most of the difficult problems and projects.

Governor Yahaya speaks graphically and illustratively too, often matching facts with figures to buttress the sincerity of his administration’s performance. Each time he did this the shout of ‘Nasara Daga Allah’, ‘Inuwa Gida-Gida’, Ko Gezau rented the air.

Inuwa works in close tandem with his Legislative colleagues, National and State Houses of Assembly Candidates. He leads, they follow.He will also give facts and figures of performance from the three Senatorial Districts of Gombe South, North and Central. The camaraderie on display by the Senate and House of Representatives candidates on the campaign train too, lend credience to an administration whose synergy of operations is not in doubt.

Another elements quite significant in this year’s campaign is the attitude of the leaders in the state to Governor Inuwa Yahaya as they received him.They seem satisfied with him.There is a unanimous chorus of appreciation from all the Emirates and Chiefdoms.

Most of the Emirs and Chiefs are mindful of all the projects cited in their respective domains and one after the other reeled out how these projects have touched the lives of ordinary people in their areas.

The Emir of Gombe,  Alhaji Dr. Abubakar Shehu Abubakar III CFR, is one of the leaders who spoke glowingly about the Governor’s performance. He spoke for more than 30 minutes during the Gombe rally, enumerating  the achievements of the Governor in his 3 and a half years of stewardship. “We thank you most sincerely for building Gombe of our dream. Gombe is now a model under your leadership.  we are excelling in all facets of development and we must thank you for that and encourage you with our support “. The Emir eulogized.

As the saying goes, facts are sacrosanct.

The list of Inuwa Yahaya’s projects are many.In the last three and half years, Governor Inuwa’s cosmopolitan attitude to developmet has been quite historic.One of the Emirs said that Inuwa is the best Governors Gombe has had so far.

Easy to understand with clarity of delivery.With this document alone, the ward-to- ward campaign became easier, believable and reassuring to the citizens that here’s a man we can entrust with political mandate and the future of our State.

Inuwa has really fared well in the last three and a half years. His multi billion naira Muhammadu Buhari Industrial Park, the Network Eleven Hundred road revolution project which opened up rural and semi urban communities for socio-economic activities are quite commendable.

Some of these exemplary projects have placed Gombe State on National and International podium of excellence and performance. When Inuwa Yahaya mounted the Rostrum at the United Kingdom Chattam House, elucidating on his developmental strides with a slant on health reforms, the rapt attention of audience and the positive media reportage was an attestation to an emerging political Titan in the  making from the Nigerian soil.

Above all, his three and a half years of undaunted hunger for a rapid transmorgrification of the calmest State in the North East Nigeria has distinguished the Governor, winning him a record three times Governor of the Year Awards from Nigerian reputable Newspapers.

Under Inuwa Yahaya’s watch Gombe has become the safest place to do business having been adjudged as the No.1 in the Ease of Doing Business Index in Nigeria.

It is also the safest place to stay in North East Nigeria.

The Jewel in the Savannah is clearly on the path of sustainable economic development and the next investment destination in Nigeria.

Gombe State Governor is not a man given to complacency in anyway.The successes recorded so far are not a distraction from his routine projects commissioning and other attendant responsibilities.He still finds time to attend to them.At the heat of the electioneering campaigns more projects like roads and the expansion of the Gombe water scheme were attended to by the vivacious and amiable leader.

A statesman par excellence, he didn’t limit the campaign to his second term ticket alone.  Governor Yahaya enjoined supporters of the APC to stay true with the party and support the Party at the national level.

He says APC means well for the people. He said the party is committed to the welfare and well-being of Nigerians in general and the people of Gombe State in particular.

He explained the humongous support of the Muhammadu Buhari’s administration for Gombe State as demonstrated by the flagging off of oil exploration in Kolmani area of the State and implementation of the Kolmani Integrated Development Project.

He also drew attention of the people to the recent take over of the Gombe State Airport by the federal government for optimal performance and operational efficiency.

He also recounts the prompt attention given to the four federal government roads bordering the State and therefore called for the citizens overwhelming support for the All Progressives Congress at the forth coming general elections.

By the time Inuwa Yahaya was rounding off the 27 days energy sapping but fun-filled and adventurous campaign rally in Gombe Local Government Areas, it was glaring Governor Inuwa Yahaya has left an indelible goodwill potent enough in the minds of the citizens that there may not be a replacement for the man who has surpassed all political pundits’ expectations in charisma, candor, character, camaraderie and exceedingly brilliant legacies in just three and a half years.

As it is often said in court yard gists, one good turn deserves another.Same seems to be playing out for Muhammadu Inuwa Yahaya,Dan Majen Gombe and the 4th Executive Governor of Gombe State.

The clamour for ‘4+4’ demonstrated with both the left and right four index fingers is a sign of continuity endorsement by the people everywhere the governor visited.

Inuwa holds the record of the best performance in fulfilling of campaign promises and executing outlined projects in the history of Gombe State political hemisphere.This is another plus for his electoral victory.

I should not fail to mention that there’s an unprecedented number of decampees from other parties especially the opposition People’s Democratic Party who have swelled up the number of votes expected by the APC in the forth coming election in Gombe State.

There is a clear signature on the the political turf that the campaign tour of the 114 political wards of the State is an affirmation of the re-election of Governor Muhammadu Inuwa Yahaya as a second term Governor of Gombe State by every stakeholder.

– Saliu is a journalist and public affairs commentator.