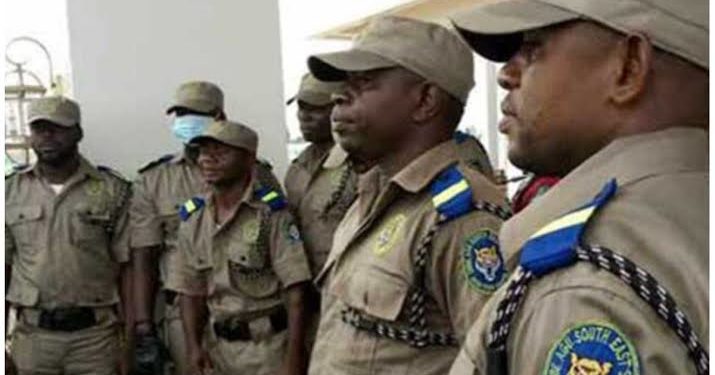 The lone survivor in the Otulu Ubawaha killing in Oru West local government area of Imo State, Nnamdi Okezuonu-Nnanna, has said the shootings were perpetrated by operatives of Ebube-Agu Vigilante Group and not the Department of State Services (DSS).

The DSS had yesterday claimed responsibility for the killing, saying the victims were members of the Eastern Security Network (ESN), the militia arm of the proscribed Indigenous People of Biafra (IPOB). The agency said the victims were not wedding guests as reported in the media. They were killed on Sunday.

But Nnamdi who is the younger brother of the groom told LEADERSHIP that contrary to the claims made by Governor Hope Uzodimma of Imo State, the DSS was not involved.

Amidst sobbing, he said “The EbubeAgu operatives did not ask us anything, they just opened fire on us while we were on four different moving motorcycles returning from the traditional marriage of my elder brother, Chijioke.

“They didn’t even ask us anything but just started shooting directly at us. There were two people each on three bikes, while we were three on the fourth. And without any warning, I saw my seven brothers shot dead within an instant and without provocation.

“I’m alive just by the sheer grace of God; I raised my hands and was shouting that I was just a passenger and didn’t know they had already gunned down seven yet they tied my hands and blindfolded me from that 5pm till almost midnight.

“It was because I appealed to the Ebube-Agu leader, Izuchukwu Akuegbulenwa, popularly called Ogwu Mozambique before they blindfolded me that I’m alive today,” Nnamdi cried.

He said seven people from his sister in-laws’ community were also killed by the rampaging operatives.

According to him, his appeal to Ogwu Mozambique that he is his in-law was what stopped his killing, saying “After I cried out to Ogwu Mozambique and he was still undecided, another superior among the EbubeAgu operatives, ordered them not to shoot me. Though they argued, the man insisted and that was what spared my life.

“In fact, the president-general of my community sent three brothers to help us, but two of them were gunned down instantly because they stopped by the corpses of our other brothers.

“My problem now is how to live with the pain of losing my brothers and how to face their parents’ which will be a constant reminder.

“I want justice for my brothers but I appeal to them not to kill us anymore, they must stop this impunity,” Nnamdi cried.

A cleric, Bishop Kenneth Obi, who is the chairman of Citizens for Righteousness and Social Justice warned against any reprisals on the community.

He said “This is one killing too much, and must not be swept under the carpet. The government must produce the people behind this unprovoked attack”.