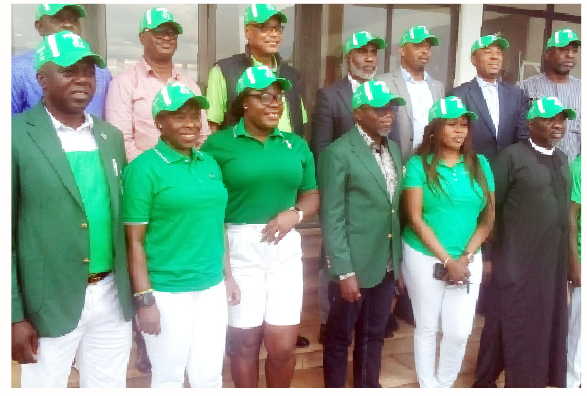 No fewer than 470 golfers from across Nigeria and Ghana will storm IBB International Golf and Country Club for the Independence Day tournament to mark Nigeria’s 62nd anniversary.

Briefing the press yesterday of the event, chairman of the tournament organising committee, Dr Olabanjo Obaleye- said the event will bring together all golfers across Nigeria to enjoy and celebrate the country’s 62nd Independence Day anniversary.

He said the event which has since commenced from Sunday, September 25 with match play between international communities and selected players of the IBB Golf Club and had the pro, staff and Caddies played on Tuesday respectively, will witness hoisting of flags on Thursday (today) to signal official commencement of Independence Day Tournament.

Highlighting on activities of the event, competition secretary of the IBB Golf Club, Julius Fadairo said the Independence Day Tournament will begin on Friday with the single matchplay for players from handicap 19 and above while the sponsors, lower handicap players and other groups will turn on the course on Saturday.

The highlight of the tournament will be the participation of the members of Achimota Golf Club of Ghana. The Ghanaian delegation has started arriving in Abuja and they will square up against the IBB Club contingent for the singles and doubles matches on October 1.

According to Fadairo, the dressing code for the tournament is white-green.

“There is something that the organising committee has done with regard to this Independence Day Tournament. If you notice we are wearing white-green face caps, all through this tournament starting from tomorrow (today), everybody that is participating in most of the events will be wearing some form of white and green.

“What we want is that the golf course should be as white and green throughout the tournament.

There is a limit to the number of golfers that can take on the course and as it stands right now, we have people who have registered and made payments for the entry fees. We have about 450 golfers and we are going to add 20 golfers from Ghana to the draw because we always allowed them to play in the international event.

Like I said earlier, we are spreading the players over two days, so the people playing handicap 19 and above will play on Friday and then the sponsors and other groups will play on Saturday,” Fadairo said.

There will be tennis matches at the tennis section of the club to commemorate the Independence Day Anniversary.